Western New York has a long, strong history when it comes to sportfishing. Indigenous species in Lake Ontario such as lake trout, lake sturgeon and Atlantic salmon were once proud traditions and are now slowly making a comeback. In Lake Erie and the Niagara River, blue pike – a species now extinct – was the talk of the fishing world.

It only makes sense that some of the top producers of fishing lures and other fishing-related equipment come from here, too.

In an effort to help keep that heritage alive, local antique fishing tackle collectors are making an effort to help document our history through fishing tackle. On Saturday, the 30th annual Antique Fishing Tackle Show will take place at the Elks Lodge #41, 6791 North Canal Road, Lockport, from 10:30 a.m. to 2 p.m. Admission is $5 (with spouse and kids under 16 years of age free). Table rentals are $20. For questions on fishing tackle, call Mark Schmitkons at 751-6611. For table inquiries, call Dan Bedford at 713-9410.

The local show isn’t a huge event, but nearly all the vendors are part of a bigger picture, members of the National Fishing Lure Collectors Club (www.nflcc.org). The NFLCC is a nonprofit international group formed in 1976 with a focus on education. The club assists members in identifying antique fishing tackle to help create a better awareness for this important (and interesting) hobby.

“We’d love to see more people come out to our show in Lockport,” said Schmitkons, who lives in Newfane. “We have a tremendous history of fishing through the local tackle that was made here, and we need more people to get involved. We’re all getting older.

“Back when I was growing up in Western New York, I was exposed to fishing through my grandfather. When he passed away, I inherited his tackle box. It was like a treasure chest with prized lures from Creek Chub, Heddon, Chapman and Pflueger to name but a few, lures that he never fished with. This was the start of my obsession with collecting old fishing tackle.” 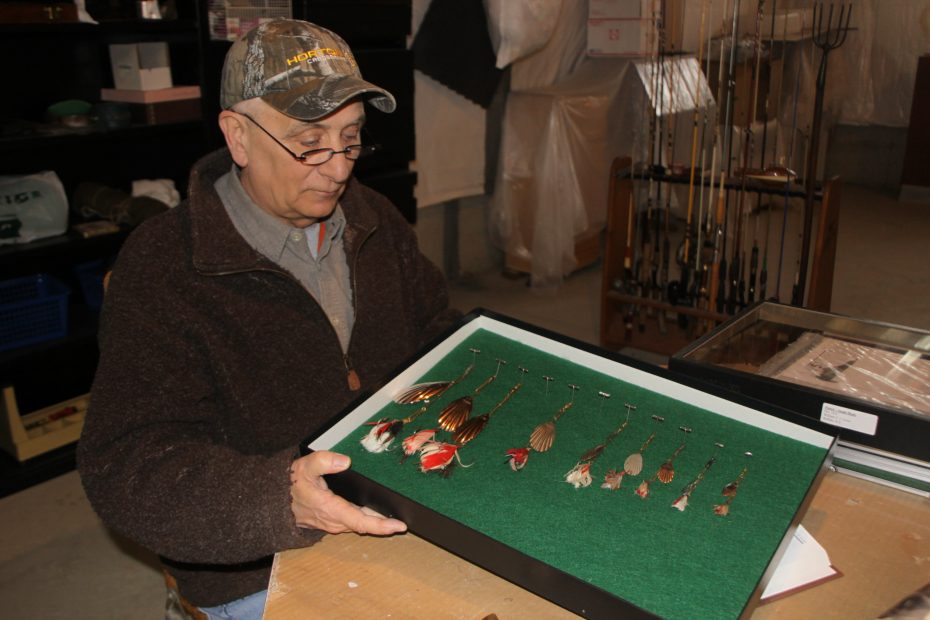 Before the internet, electronic play stations, tablets and smartphones to occupy a child's time, we used to spend more time outdoors. Hunting, fishing, hockey, football and baseball filled in our seasons. We also collected things. Baseball cards, comic books, vinyl records, arrow heads, knives … the list of things seemed never ending. It took one small spark to start another collecting obsession, something as simple as a pin or a patch. It sure would be nice to see younger generations take an interest in the history of fishing through lure and fishing gear collecting.

“Of course, the fishing lures command the most attention,” Schmitkons said. “I discovered the NFLCC in the 1990s and I found other people like me with this obsession. I learned how to value a lure, a reel, a rod and how to grade them as far as condition. I also learned how to research the old now-defunct lure manufacturers.

Schmitkons has contributed to several books, including "The Paw Paw Bait Company Book" by Tougas and Stockman. At one time, he had one of the largest collections of Paw Paw Baits in the country. 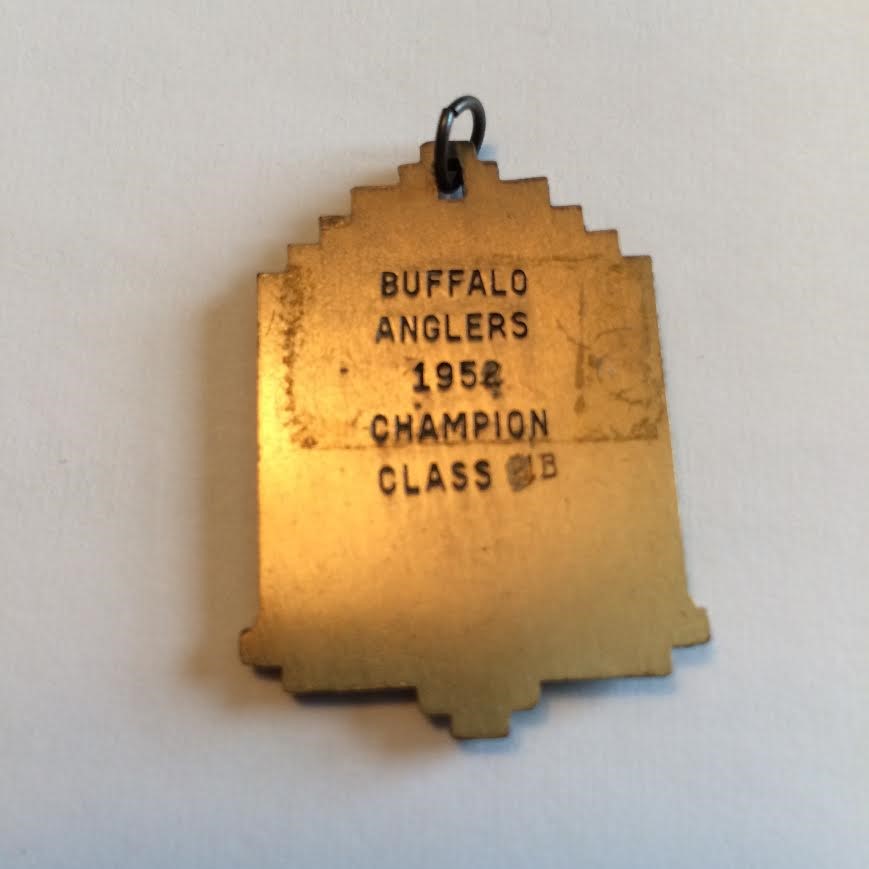 Here is a casting medal from 1952 in Buffalo. (Bill Hilts Jr./Buffalo News)

He has refined his collection the last few years, specializing in Creek Chub and Heddon Fishing Lures. However, he loves the fishing tackle made in Western New York and the history behind it, such as Spiral Wind Reels made in Tonawanda (for only four or five years in the mid-1930s) or Lyons and Coulson, high-end fishing tackle made on Main Street in Buffalo.

One of the biggest tackle makers in the area was William T. J. Lowe of Buffalo. Schmitkons enjoys collecting lures that are pre-1915, before Lowe died. And it’s not just the lures. The background of people like Lowe is an important part of the attraction.

“Trying to figure out the history is really cool,” Schmitkons said. “Lowe was born in Buffalo in 1840. He fought in the Civil War and served in New York’s 5th Calvary where he was wounded and returned home. In 1876, he became a silversmith. It was in 1878 that he started a Trolling Bait Company and the following year started a Fishing Tackle Company out of his home on William Street in Buffalo. He received his first U.S. Patent in 1882, a second in 1883 and another in 1885. After passing away in 1915, all patent rights were sold to Pflueger/Enterprise Manufacturing Company.”

That’s the kinds of research that can be both time consuming and rewarding.

“Nearly every tackle box in Western New York had a Lowe’s spinner in it,” Schmitkons said. “For most, there isn’t a big value to them because there were so many of them. However, if you know what you are looking for, you can put together a nice collection. There were three basic types of spinners offering dimpled, starred and fluted blades in a variety of sizes.” 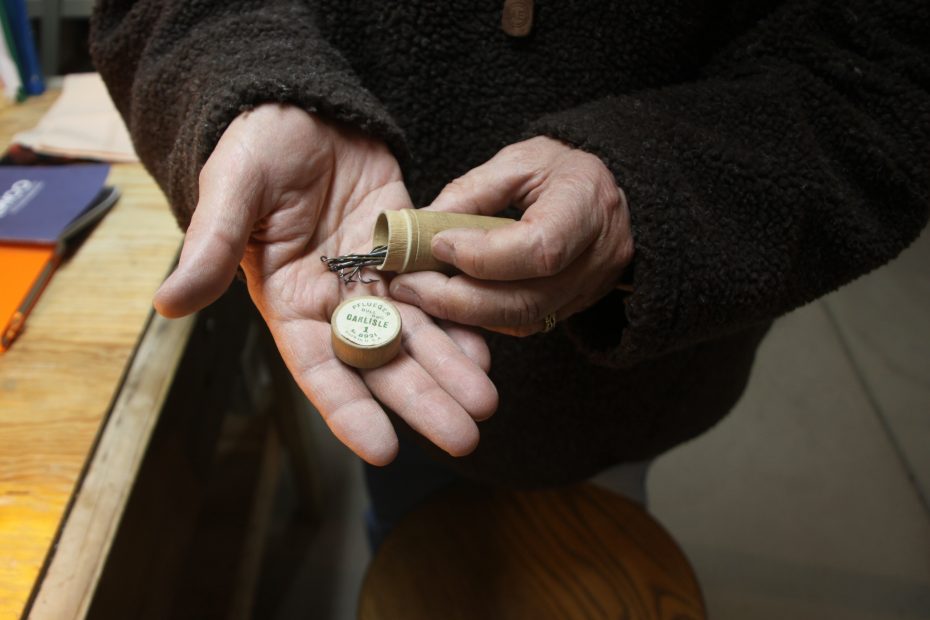 Fishing hooks used to be sold in wooden containers like this one, a fun collectible. (Bill Hilts Jr./Buffalo News)

One way to start a collection is to try and gather a set of certain lure types with all its varied sizes.

Like with any type of collecting, you must beware possible forging or counterfeiting, especially with expensive baits. Schmitkons carries a black light to test a lure before he buys it.

“The older lures will look different under a black light,” he said. “The aging process gives them more of a dull look if they are authentic. Lures with newer paint jobs look shiny under the light. You also need to be aware of scams that might try to boost the costs at auctions or online sites like eBay and Craigslist.”

If you have some old fishing tackle, you are encouraged to bring it to the show to see if it’s worth anything. If you want to sell it, don’t be afraid to approach more than one vendor to see who will give you the best price.

This is also a great venue to learn how to get started. Ask participants on the best approaches for finding tackle, how to display your products and how to maintain and protect your investment. And if you plan to bring some old tackle, don’t clean it with anything that can harm the finish of the lure or gear.

As I mentioned earlier, you don't have to collect just lures, rods or reels. You can collect fishing rulers, scales, buttons, tackle boxes, hook cases or fishing catalogs. If you own something in its original box or wrapper, that is even better.

If you find that rare collectible, it could find you casting for cash. Have some fun and help preserve some angling history.