The commute home this afternoon has turned into another slow one.

A steady snowfall – which seemed moderate, but accumulated quickly – made highways treacherous and slowed traffic to a crawl.

Major routes were further congested by lane closures due to accidents.

This afternoon's snow is part of a passing storm system expected to bring Western New York up to 8 inches of snowfall by late tonight.

"This trend should continue into early this evening," the weather service said.

The weather service, in a special weather statement issued just before 4 p.m., advised motorists that the steady snowfall will impede the evening commute.

"With snowfall rates of an inch per hour between 4 p.m. and 7 p.m., this widespread snowfall will impact the evening commute across most of Western New York, including the Buffalo and Rochester metro areas," the weather service said.

It added: "Plan on slippery travel conditions and reduced visibility during this time."

Those heading downtown for "An evening with Michael Bublé" at KeyBank Center are also likely to be affected by the snowfall or slippery roads.

A winter weather advisory remained posted for the eight counties of Western New York until 10 p.m. Forecasters said the snow should taper off after dusk from west to east.

"This system should wind down fairly quickly this evening with possibly a little freezing drizzle at the end," the weather service said. 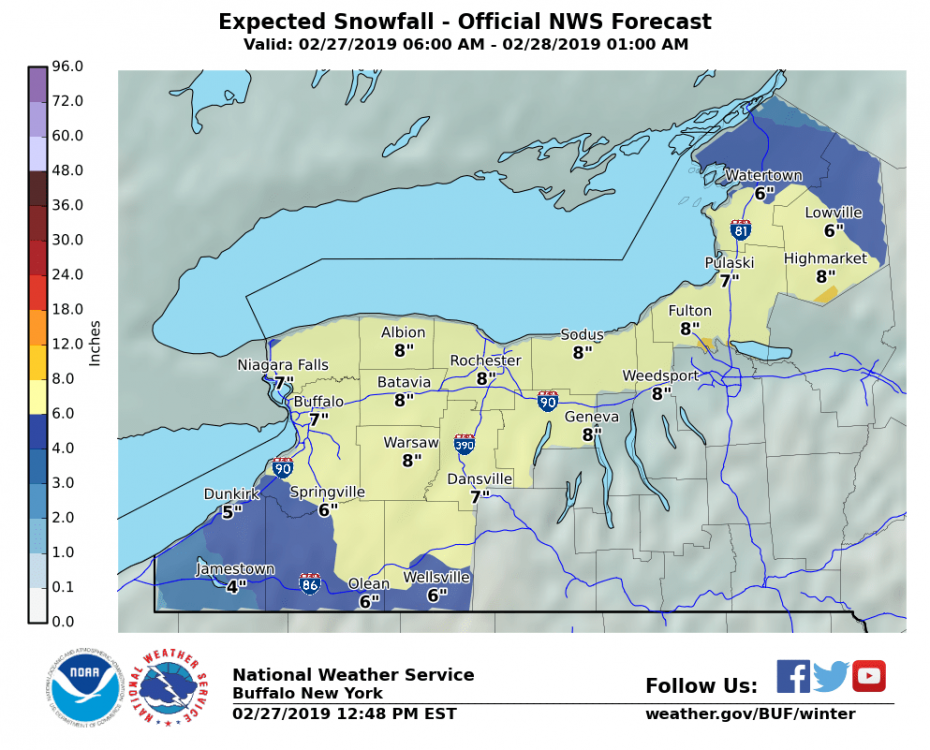 The heaviest snows today will be found across much of Erie County as well as the Niagara Frontier. (Image courtesy of the National Weather Service)

Chances for snow showers are possible overnight as well, with new snow accumulations of 1 to 3 inches. Overnight lows were forecast in the upper teens.

Partly sunny skies were forecast to return on Thursday, with highs in the upper 20s, the weather service said.

Here's a look back at some of the highlights from Buffalo's past five wintry Wednesdays: