The ramshackle, weather-beaten cottages and the people who lived in them were legendary in their own time.

Over the course of about 40 years, a group of several hundred families, mostly Irish and headed by mostly fishermen and sailors, settled on a strip of land that was created when the City of Buffalo built a seawall in 1865 to protect the city and the harbor from erosion and flooding caused by Lake Erie’s harsh wind, water and ice.

About 150 to 300 feet wide, the Seawall Strip ran from the lighthouse along the lakeshore to just past the foot of Michigan Street, which today is right around Wilkeson Pointe.

A 1902 photo of the Seawall. To the left, the steeple of Our Lady of Mercy is visible. (Buffalo Stories archives)

For 30 years or so, these folks lived, mostly ignored, on land that most viewed as useless. A few had to move their homes when a railroad was built; another couple made way for access to grain elevators. But in the mid-1890s, city fathers began to see the land as the perfect spot to connect the Hamburg Turnpike with downtown Buffalo.

The decadeslong battle that ensued left poor people battling for their homes and newspapers and politicians battling over who was trying to do the right thing.

Of the five or six Buffalo papers that were covering the story closely, the one most firmly on the side of the people living along the seawall was the Buffalo Times. “Are 2300 citizens to lose their homes?” asked one front-page headline in 1897.

“These men built their homes with their own hands,” read the accompanying story. “They are not imposing structures, but they are comfortable, and when the wind blows down the lake and the big waves boil up along the shore, the people on the seawall strip are still warmer and safer than many on the mainland. They have fought poverty and nature and won. Now all their little property is in danger of being taken from them.”

It was for the good of the city, it was claimed, if not the people living there. It was key to Buffalo’s continued expansion.

“The seawall strip and outer harbor will be developed, and the City of Buffalo is destined to enter upon an era of rapid growth in the near future,” said County Engineer George Diehl.

In 1908, the federal government took control of much of the seawall strip and evicted those living there.

“The hovels that for a score or more years have been homes to a half a dozen families must go,” reported the Buffalo Commercial — the paper that was most in line with interests wanting the strip developed.

“The strip in question,” said the Commercial, “is a dreary stretch of sand — desolate in summer, bleak in winter, worthless at all times without the expenditures of a vast sum; but on its barren acres a score or more of shanties have been erected and have been the homes of as many families.”

The children of the seawall at Our Lady of Mercy School, 1907. (Buffalo Stories archives)

Six years later, holdouts were still living on the seawall. The Seawall Commission awarded $2,700 to each of the five families that had been living on “the island” for generations. It looked like the nearly 20-year battle was over — until a judge declared the payments illegal and ordered the city to serve notices to vacate. The City Council unanimously refused to enforce the order to vacate, and the legal battles continued.

The well-organized residents who remained dug in even deeper at this point.

“Some of them have seen their children and grandchildren born in these homes — the only homes they know — and it would terrible to drive them out and tear down their homes without any compensation,” said Thomas Sullivan, the residents’ lawyer.

“The city’s offer of a settlement puts them on the record backing their claims. Forcible ejection would make anarchists of the residents of the seawall,” Sullivan said.

Mary Freitus was one of the survivors. She was born in the home she lived in on the strip. It was built by her father, John Lattimer, in 1844, making her claim the oldest. She remembered growing potatoes and raising chickens, pigs and cows on the strip.

The fact that people like Freitus had lived in their homes for 70 years was only part of what validated their claims of ownership. Institutions popped up in the neighborhood as well.

The Celtic Rowing Club Boathouse was on the strip for more than 50 years. Through the years, it boasted members like William F. Sheehan, who went on to become New York’s lieutenant governor, as well as William J. Donovan, the founder of the CIA. 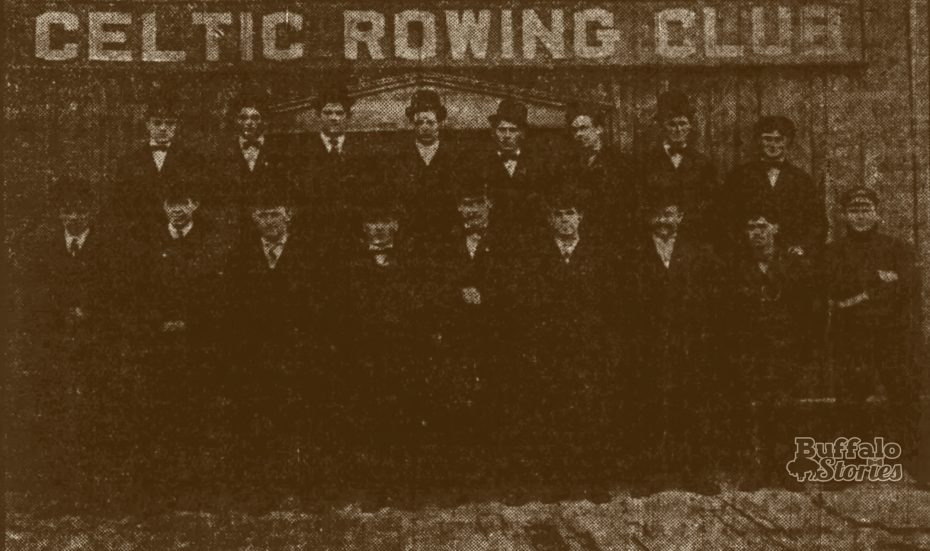 There was even a Catholic church and school on the strip at the foot of Michigan Street. Our Lady of Mercy was dedicated by Bishop Stephen V. Ryan in 1875. Like everything else on the seawall, it was a humble place.

“A small unpretentious frame building, with an exterior sadly the worse for paint, stands at a distance from the road leading down to the lake at the foot of Michigan Street and beyond the railroad crossings. A tiny cross, rising above the surrounding buildings, tells what the modest little edifice is,” reported the Commercial in 1894. 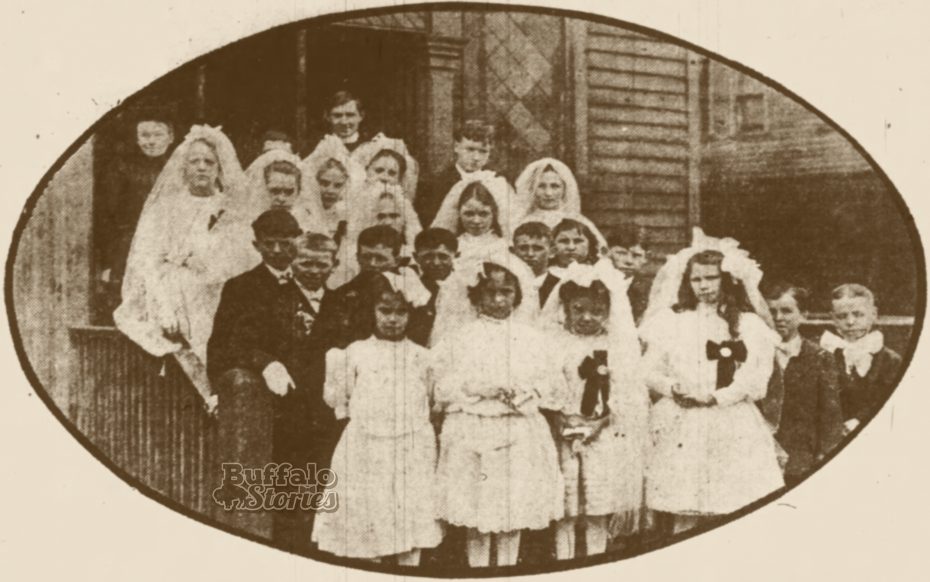 The little two-room schoolhouse attached to the chapel was staffed by Sisters of Our Lady of Mercy from Miss Nardin’s Academy. A priest would come from the cathedral to offer Mass every Sunday for the 150 or so families at the parish around 1895.

The Commercial article went on, “Situated in the very heart of the shipping district, the work of the sisters and the priests is hard and discouraging in the extreme. It is no small thing to make the daily pilgrimage from the convent on Franklin Street beyond the swing bridges to the island.

“The influence of the priests and the sisters in this part of the island city is far-reaching and beneficial. They go into the hovels of the poor people, visit the sick and minister to the dying. But perhaps more than all else is the influence they have upon the children of the island, whose minds, but for the tiny chapel school, would know nothing but squalor and crime.”

The years of fighting over the seawall strip came to a head in 1917, when the Pennsylvania Railroad tried to take the home of longtime Seawall stalwart Col. John Houlihan. 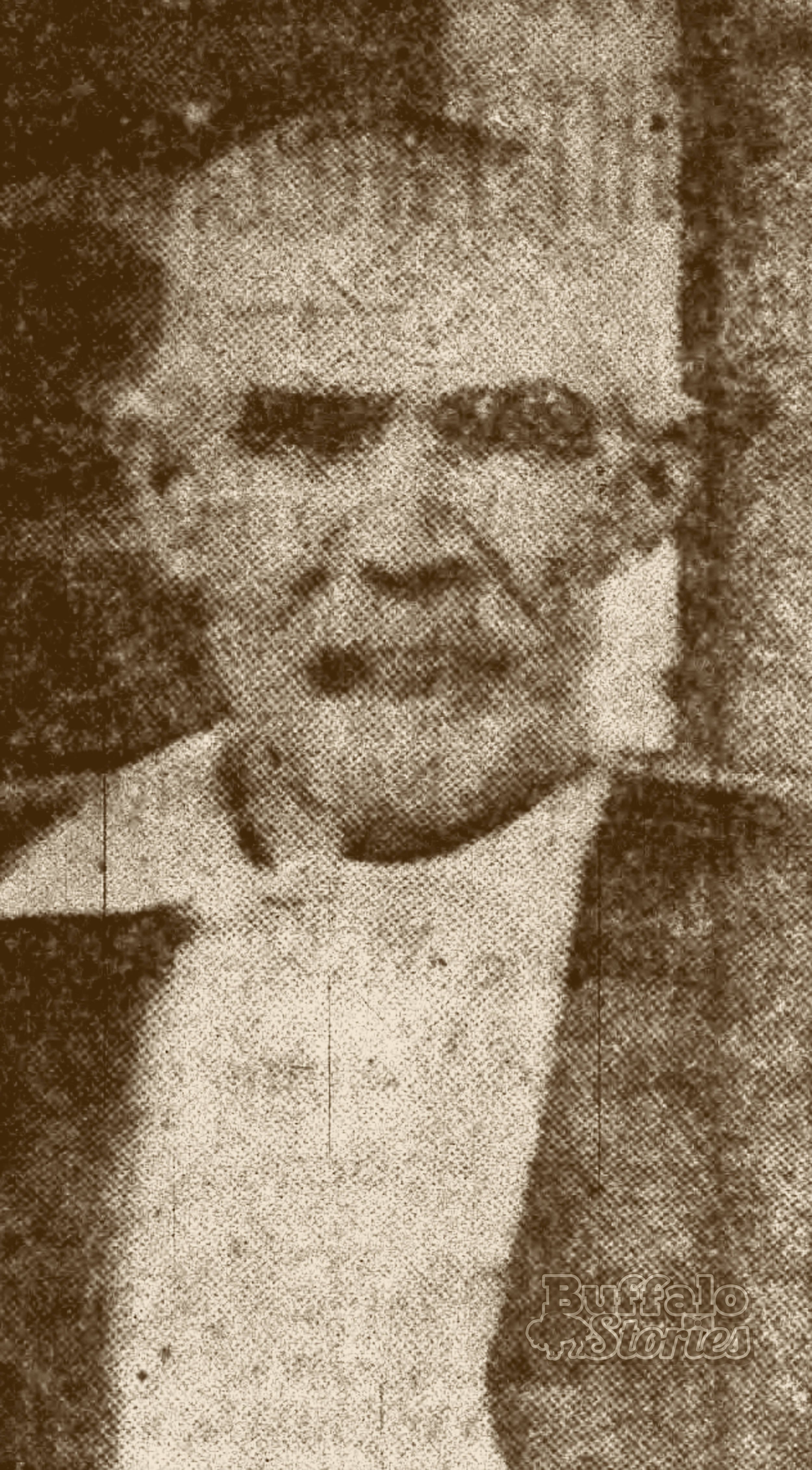 He barricaded himself inside his home of 25 years, surrounded by three American flags and a rifle across his knees. Houlihan’s son was nearby wielding an ax and Mrs. Houlihan was standing at the stove, ready to dispense with a big pot of boiling water if needed.

“You know what happens to anyone who touches the American flag,” said Houlihan to the railroad carpenters and laborers who had shown up to tear the place down.

“I’m on my own property and serve notice that I will defend it to the last drop of blood in me,” said Houlihan. The railroad stood down, but Houlihan died a few years later.

Eventually, parts of the land that were once the seawall community were taken up by the railroad, by grain companies, and by the city — for Fuhrmann Boulevard, for a short-lived city bathing spot called Times Beach, and for the city dump.

The stench of the dump drove out any of the remaining Seawall holdouts, but when the Depression hit, “hoboes and down-and-outers” dug into the mounds of garbage and built shacks sheltered by and out of the debris. 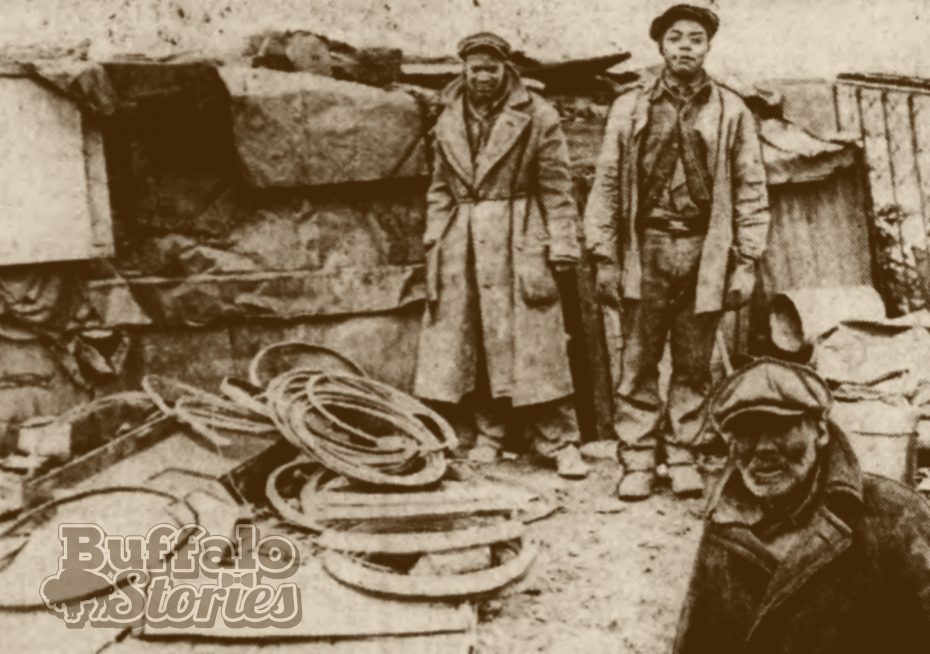 “Before long, there was a regular colony of shacks, which harbored more than 100 grimy men who ranged from the harmless and homeless to suspects seeking a safe hideaway,” reported the Courier-Express in 1934, as the last of them were being routed out for what had been talked about for 40 years – the building of an outer harbor highway, which was to be named after Mayor Fuhrmann.

Those final evictions marked the end of nearly a century of industrious – if not always clearly legal – living along the water’s edge in Buffalo’s Outer Harbor.