It could be tough sledding to get to and from work tomorrow – and for those planning to head downtown Wednesday evening to listen to Michael Bublé at KeyBank Center.

A winter weather advisory is posted for all of Western New York from 6 a.m. to 10 p.m. Wednesday.

As much as 7 inches of snow is expected across the region. It will be a general snowfall brought by a synoptic storm system crossing to the south of the region, rather than lake-effect snow.

That means all parts of the region can expect snow.

"Travel could be difficult," the weather service said. "Periods of snow will result in snow-covered roads and limited visibility."

The chances for snow showers will start to increase late tonight. Less than an inch is possible in metro Buffalo by early Wednesday.

The snow is forecast to start ramping up by midmorning Wednesday and will continue through late evening. The heaviest snow is expected from 1 to 7 p.m., forecasts show. Highs are forecast in the upper 20s.

About 6 inches of new snow is expected to fall in metro Buffalo. 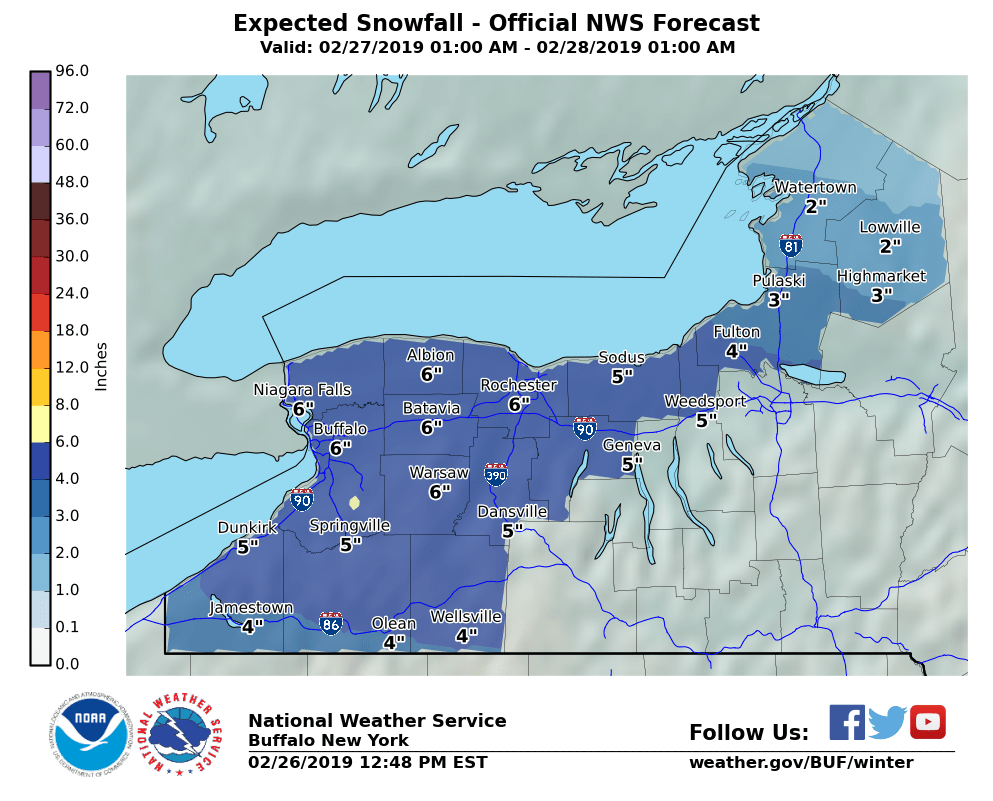 A half-foot of snow is expected across most of Western New York by early Thursday morning as part of a general snowfall. (Image courtesy of the National Weather Service)

Wednesday night will bring the likelihood of more snow with overnight lows in the teens, the weather service said.

Forecasters called for chances for snow showers to linger into Thursday, otherwise partly sunny conditions were expected with highs near 30 degrees.

After chances for more snow showers Thursday night and lows in the low 20s, temperatures should rebound closer to normal under partly sunny skies on Friday, the weather service said.

This smorgasbord of February weather in Buffalo will run right though the end of the month Thursday.

So far, February 2019 has been an active weather month. Almost every type of weather has been on display, including bouts of snow squalls, heavy rain, sleet, freezing rain, ice and high winds. Temperatures have been as warm as 60 degrees, and as cold as minus 4.

Highway, tree trimming and utility crews should grab a break in the action today to get caught up on work in the wake of the windstorm that raked the region Sunday and early Monday, knocking out power, felling trees and utility lines and depositing ice from Lake Erie and the Niagara River over onto shorelines.

The extended forecast into early March looks to continue on the trend of below-average temperatures.

The six-to-10-day forecast from the federal Climate Prediction Center suggests colder than normal days through the first week in March.

Don Paul: The storm is winding down, but winter isn't