The Amherst Tigers have been consistent winners for the past decade, collecting 168 victories, seven ECIC division titles and three Section VI championships since Chris Kensy took over the boys basketball program in 2009.

Yet it’s the losses that linger in the locker room.

“I couldn’t watch the film of that game until like a year ago,” wrote Belton, who captained a Tigers team that lost in the Class A final to eventual state champion McKinley in 2012. “I think I gave it my all, but at times I feel like I could’ve done more in practice throughout the season to get us ready for that moment and hold my teammates accountable.”

Before every practice and home game this season, Amherst players have stopped at the wall for motivation before heading to the court.

“Seeing all those seniors put what they felt like they could’ve done better, it makes you work 10 times harder,” senior forward Ja’Kye Womack said after the Tigers’ sectional quarterfinal victory over West Seneca East on Saturday.

“Some days, you don’t really want to be here. Or you want to be here, but you’re mad about something else that’s on your mind. Then you read that and you think, 'I’ve got to go hard today.' That’s the only way we are going to keep going.”

The 2018-19 Tigers have earned their stripes by winning 16 consecutive games after a 2-3 start. Entering Wednesday night’s Class A-2 quarterfinal game against Iroquois at Buffalo State, they are tied for fifth in The News’ large school poll, honorable mention in the state Class A rankings and the No. 1 seed in the sectional bracket. 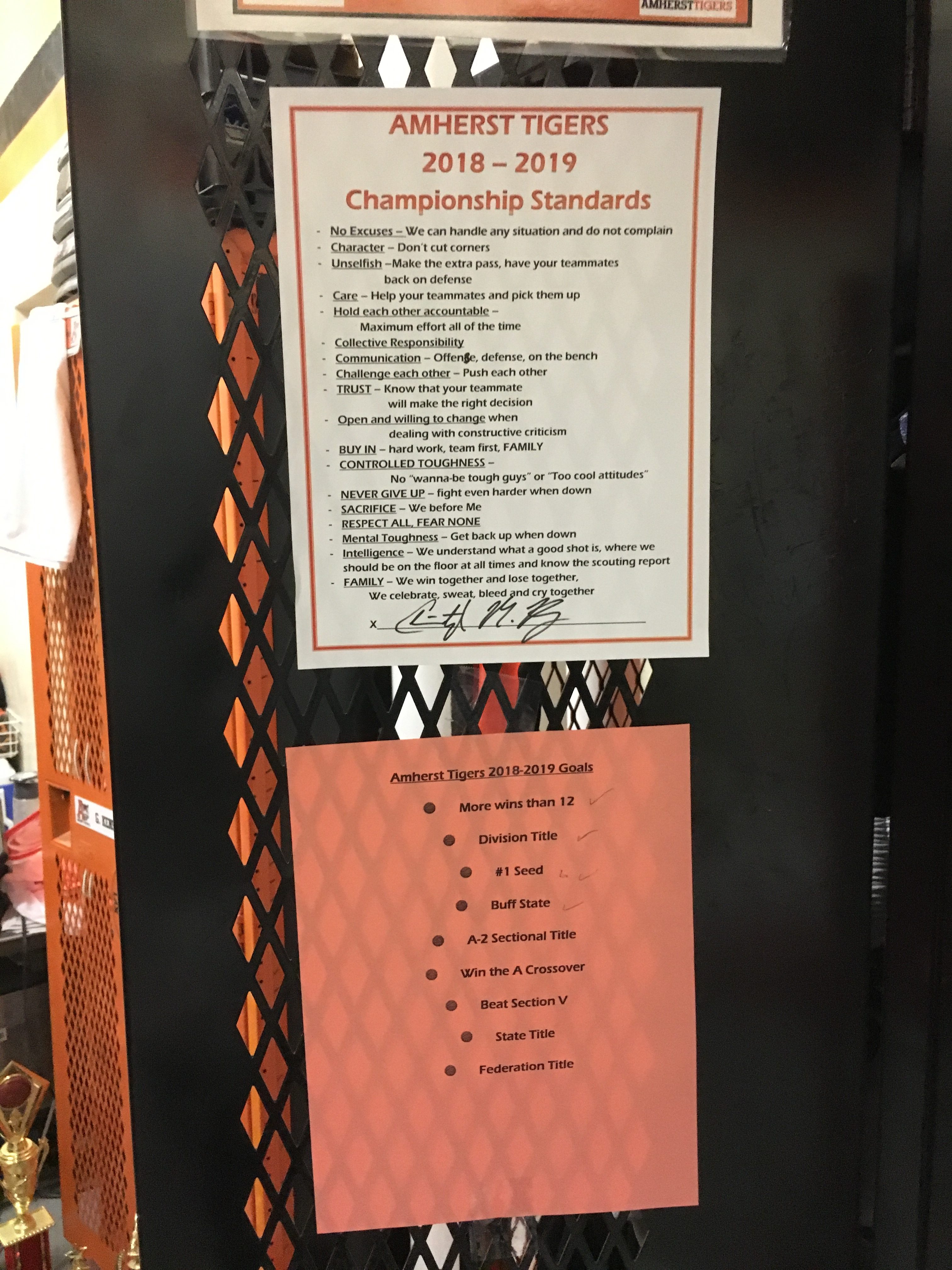 Despite those accomplishments, the Tigers aren’t even halfway through their list of goals for the season.

“I’ve said it since day one, and I know a lot of people looked at me like I had four heads, but this group has the potential to be one of my top teams, if not my top team,” Kensy said.

“We set goals and they are lofty,” the coach continued. “Obviously everybody wants to get to that pinnacle, that state title, but we know we’ve got to take it one step at a time. We know there are a lot of good teams that we have to go through. But we are enjoying the ride right now and enjoying checking these off as we go.”

Last year, the Tigers finished 12-8 with a sectional quarterfinal loss to South Park, failing to play at Buffalo State for the first time in seven years.

“We took that to heart and had a great offseason,” Kensy said.

“Working out literally every day,” Womack added. “Coming in and getting up more shots, lifting weights.”

The Tigers also had to deal with the departure of All-Western New York honorable mention Daesean Ashley, who transferred to St. Joe’s after leading Amherst with 17.2 points per game as a sophomore.

“Jaylen has brought a lot of energy to us,” senior guard Jake Mullen said. “Scoring-wise, playing defense and picking up the tempo, he’s helped us out a lot.”

Mullen is averaging 10.7 points, 5.4 rebounds, 4.3 assists and 1.7 steals. Stewart said the opportunity to play with Mullen factored into his decision to transfer after having a limited role off the bench in his sophomore season at Park.

“Jake is like my best friend,” Stewart said. “I’ve been working out with him for a long time, since we were young. I felt like it would be a good opportunity for me to come over here. I fit in very well. I came to the workouts over the summer and I liked it.”

Kensy has borrowed from the University at Buffalo’s playbook in recognizing players for their blue-collar contributions. After each game, the Tigers player who accumulated the most hustle points gets his picture taken with a hard hat and sledgehammer.

UB coach Nate Oats was flattered to see a local team adopting one of his coaching methods.

"I think it's great," said Oats, who spent 11 years as a high school coach before coming to UB. "The blue-collar stuff that we are preaching, that's what wins games. If you can use that to motivate your kids, why wouldn't you? And if your kids are good enough, you've got them playing the way we want before they get here."

On an early season trip to Philadelphia, the Tigers visited Villanova University and got a lesson from the defending national champions’ coach Jay Wright on responding to adversity.

“Their big term is attitude and how it carries over into life,” Kensy said. “You can’t control what happens, but you can control how you respond to it. And that’s been big for us.”

Upon returning to Western New York, Amherst lost its next game, 66-62 at West Seneca East. The Tigers have won every game since, including a 74-42 triumph over the Trojans in their sectional matchup.

“That shows our growth and maturity, learning from past experiences,” Kensy said. “This is the deepest team I’ve ever had. And when everyone is moving in the right direction and doesn’t care who gets the credit and is willing to have their brother’s back defensively and share the ball offensively, the sky is the limit.”