The windstorm's wake could have been worse.

The ice blanket atop Lake Erie crumpled as winds pushed it past the ice boom and onto shore. Toppled trees and downed limbs left tens of thousands without power.

But fewer than two dozen homes in Erie County had trees fall on them, a figure that was far lower than officials anticipated. No deaths or serious injuries were reported.

Had the area seen 75 mph gusts for an extended period of time, as was feared, damage probably would have been more extensive, Erie County Executive Mark Poloncarz said Monday.

"It was a pretty strong windstorm for our region, but it could have been much worse," Poloncarz said.

As some residents remained without power, the county was in the process of setting up at least one emergency shelter to provide sleeping accommodations to people overnight into Tuesday. That was in addition to warming shelters in Buffalo and around the county. 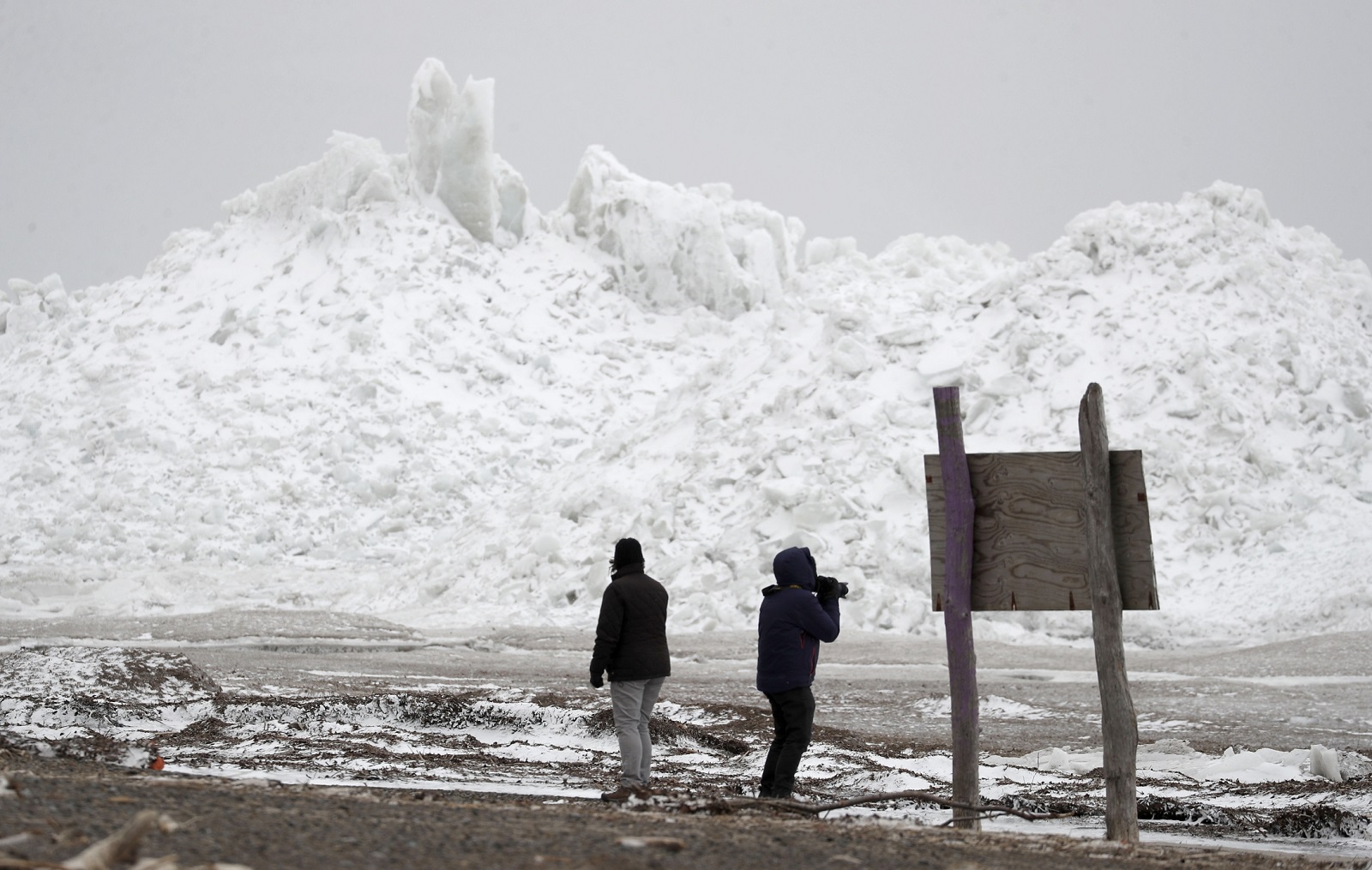 The county also was setting up dry-ice distribution locations for residents of Buffalo and the towns of Amherst and Tonawanda, the areas hit hardest with lingering power outages.

Water levels in the Niagara River were elevated, and there was a significant amount of ice in the river, but there were no reports of flooding as of early Monday afternoon.

Gov. Andrew M. Cuomo visited the region to survey storm damage, hopping aboard an ice breaker in the Niagara River.

Evidence of the whipping winds could be seen in damage across the region. Large chunks of ice from the lake buried the Bird Island Pier along Buffalo’s waterfront, damaging the railing and closing it for the foreseeable future. The storm’s powerful wind gusts ripped roofs off some commercial buildings, including the bookstore at the University at Buffalo’s North Campus and the roof of Sahlen Field in downtown Buffalo, where some air venting units also were damaged. The bookstore is closed indefinitely, according to a recorded message heard Monday on the store's phone line. 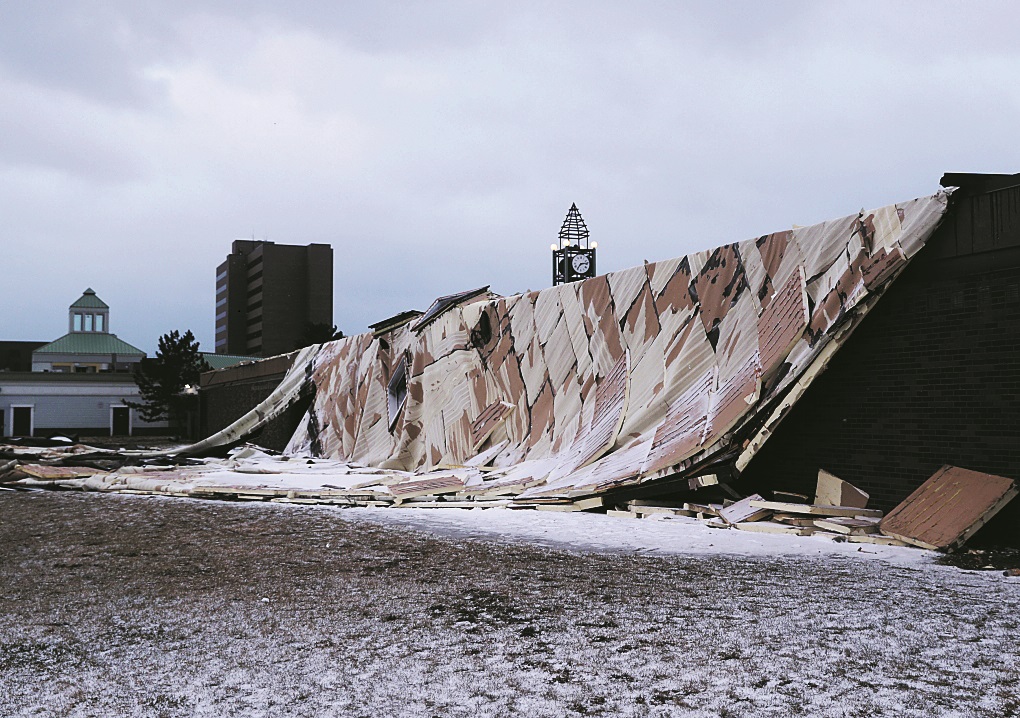 The roof drapes across the side of the University Bookstore at UB's North Campus on Monday. (John Hickey/Buffalo News)

“They are in their assessment phase,” Neaverth said Monday afternoon.

Poloncarz warned some may still not have their power restored by the end of the day.

As the day went on, signs of recovery sprouted.

The Skyway reopened in the early afternoon, while a travel advisory across the county was lifted about 1:30 p.m.

Two people suffered non-life-threatening injuries in Buffalo during the storm, Mayor Byron W. Brown said. A blowing sign struck a pedestrian at Niagara and Garfield streets, and a person was injured when a tree fell onto a house on the 400 block of Wyoming Avenue, city officials said.

The prolonged high winds, which began Sunday and continued into Monday, delayed the power restoration efforts of utility crews. The high winds made it problematic for crews to work in the air in bucket trucks, said David Bertola, a National Grid spokesman. Still, crews can do other work on downed lines and on other elements of the transmission system, he said.

The bulk of the damage in Buffalo was caused by falling debris or tree limbs landing on parked vehicles, the mayor said.

The ice boom, which is installed every winter near the end of Lake Erie to prevent large amounts of ice from flowing down the Niagara River, functioned as intended in the windstorm, according to New York Power Authority officials. During high-wind events, the boom submerges to allow ice to flow over the top of it. 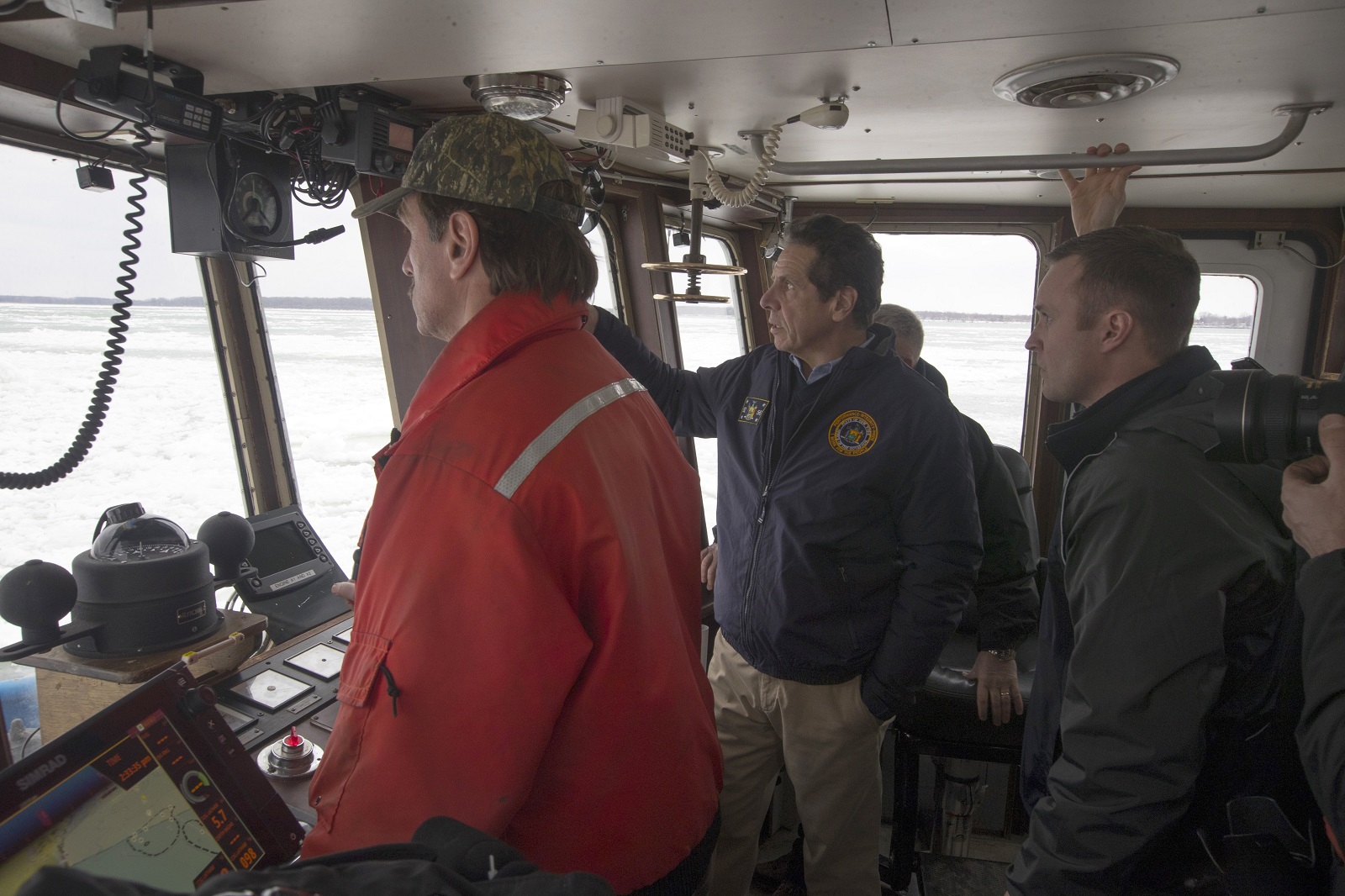 Capt. Brian MacLaren, left, on the ice breaker William Latham from the New York Power Authority, is joined by Gov. Andrew Cuomo and Chris Carey, operation manager for the authority, on an ice-breaking missing Monday on the Niagara River. (John Hickey/Buffalo News)

"It is not unusual for ice boom pontoons to break loose during high wind events. It does not mean the ice boom is compromised," the authority said.

Authority officials said the boom did not break.

Trees downed, roofs off, power out, but ... 'it could have been much worse'
Video: What happens when Lake Erie ice boom pontoons break loose?
Niagara Falls, Dunkirk log highest wind gusts in WNY; Buffalo's was 69 mph
Gallery: Winds whip Western New York
Readers share their photos of the storm

Paonessa compared the ice boom and its pontoons to charms on a charm bracelet, which would still function if charms fell off. He said the large amount of ice did not affect hydroelectric power production at the Niagara Power Project, the intakes for which sit above Niagara Falls.

The storm gave students at schools in Erie and Niagara counties an extra day off on their winter breaks.

The day off from school Monday came on the day many were prepared to go back to class after a week off that started with Presidents Day last week. And that was causing some school superintendents, in districts that had already used up their allotted snow days, to look at other scheduled days off that could become school days so they could be in session the required 180 days per school year.

But the governor came through, noting in a statement that Amherst Central had decided to close school because of the winds causing disruption to traffic signals and power outages.

Cuomo said his administration was in contact with the state Education Department.

"It has confirmed that the day will not be held against the school district or other districts requiring waivers due to insufficient available school days. There is no higher priority than the safety of our students, and I commend New Yorkers for their vigilance during this severe weather," the statement said.