Jack Schultz has marveled at the power of Lake Erie for 86 years.

In April 1979, waves carried away cars from his Hoover Road neighborhood in Hamburg.

In December 1983, turbulent lake waters propelled a 70-foot long tree trunk through his home and into a neighbor's house.

And then came Sunday.

"This is the first time in my entire life I've seen it come this high and this close to the house," Schultz said.

Calls for a voluntary evacuation of Hoover Beach began Sunday afternoon as strong southwesterly winds pushed the lake waters from Ohio toward Buffalo. The momentum from the seiche tore up ice on eastern Lake Erie and shoved it onshore on both sides of the border.

"I don't get nervous, I get concerned," Schultz said about the home his grandfather first built as a cottage 103 years ago. "I've lived enough to realize there's a time to stay, and a time to go." 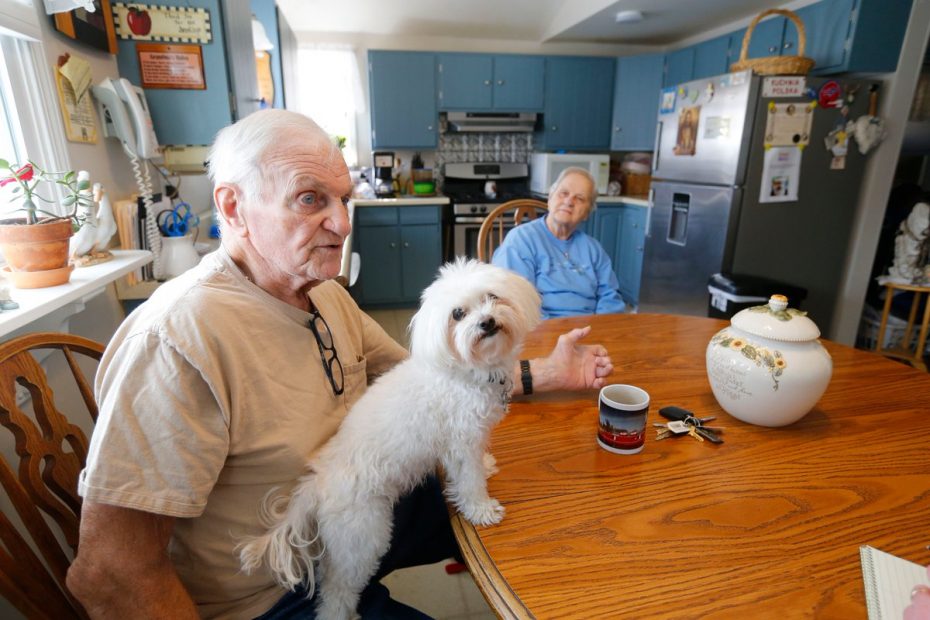 Jack Schultz and his wife, Barbara, sit at their kitchen table with their dog, Spencer, Monday in their Hoover Beach home. (Mark Mulville/Buffalo News)

Schultz's wife, Barbara, didn't need the anxiety that comes with watching the ice get closer to the family's home. She appealed to higher powers – Our Lady of Guadalupe and the Blessed Mother of Jesus – and then headed to higher ground: the safety of a relative's house on nearby Morgan Parkway.

Her husband stayed home with his grandson.

"I had to stay and watch it," Jack Schultz said. "It came up in sheets. It just layered it up to the wall. Then, when the (ice) boom broke, it took all the pressure out of here."

Fay Davis, a neighbor of Schultz, watched it happen, too. As Davis texted her daughter Sunday afternoon, the ice drew closer.

"And, all at once came one great big wave. Next thing I know, it came right onto my patio," Davis said.

Aside from a metal table and some planters, there was no significant damage. The ice stopped at the foot of Davis' back door.

"This is unbelievable," Davis said. 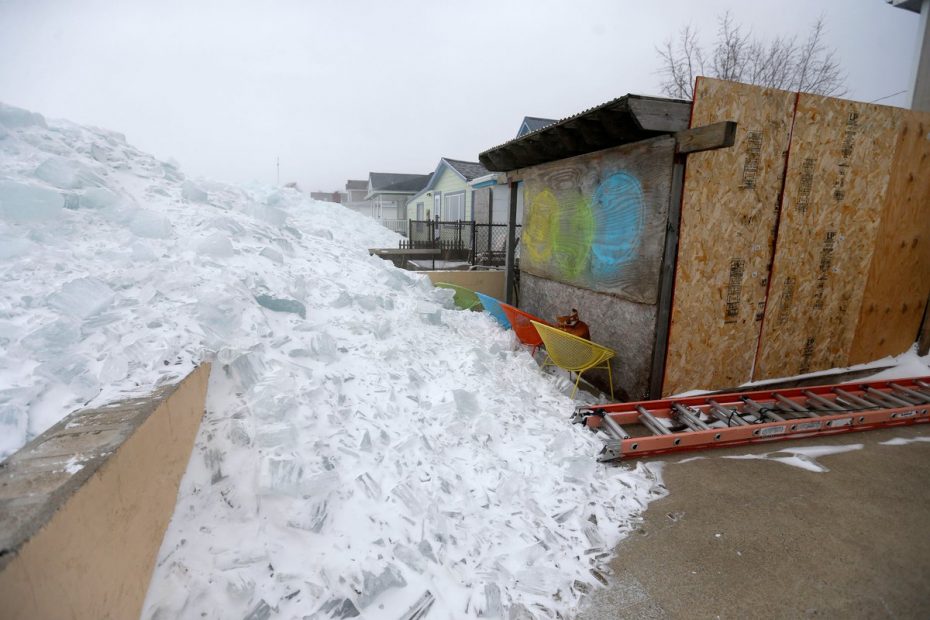 Lake Erie's ice was piled up and over a wall behind the Schultz's and Davis' homes on Monday. (Mark Mulville/Buffalo News)

Sunday and Monday's sights were enough to shock even the longest tenured residents of the shoreline.

Ed Hoak has been around Lake Erie all of his life. He’s seen wind and waves and ice – even an ice car.

But the storm Sunday that broke up large blocks of ice and deposited them on shore was new even to him.

“I’m 69 years old. I’ve never seen ice like that, this close. Not ever this close,” said Hoak from Hoak’s Lakeshore restaurant on Route 5 in Hamburg.

The only damage to the restaurant by Monday was the facing of the sign which blew off.

Even as it threatened homes at Hoover Beach, the ice could also be viewed as a lifesaver, Hoak said. That’s because the ice buildup kept water from flooding the homes and the restaurant.

“That was the saving grace for this area – there were no waves,” Hoak said.

The ice also kept the water from washing over Route 5.

“You get 75 mph winds and this part of Route 5 is still open – that never happens,” Hoak said.