Grand Island's band of brothers mentality has paid off.

Mitchell Fusillo scored the game-winning with 23.1 seconds left in regulation as the Vikings topped West Seneca West, 3-2, in the Section VI Small School championship game at Harborcenter on Monday night.

The win gives the Vikings their first sectional hockey title and vaults them into  Saturday's regionals against Section III Skaneateles at 2:30 p.m.

"We are extremely united. We are quite literally a band of brothers on the ice and off the ice," Fusillo said. "And I think everyone wants to play for each other and I think that's the real difference maker from this year and last year's teams."

Fusillo certainly knows about making a difference as he netted the game-winner that gave Grand Island's junior varsity team the 2018 state title. 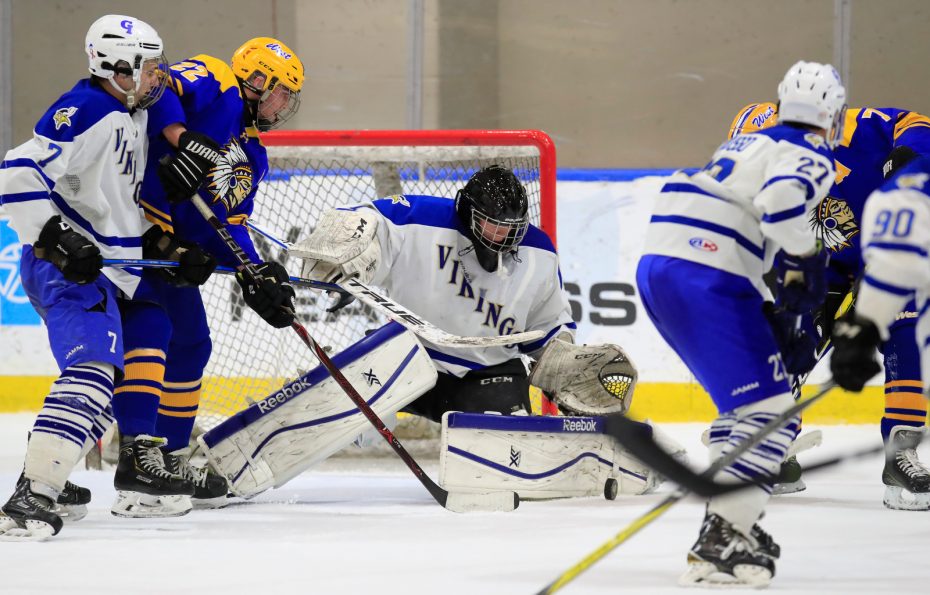 Grand Island goaltender Nathan Stroh makes a save against West Seneca West during the third period of the Division 2 school Championship at Harborcenter on Monday, Feb. 25, 2019. (Harry Scull Jr./Buffalo News)

But for Don Pray, the real joy was seeing his team come together, wanting to succeed more for each other than for their personal goals.

"I think they started playing for each other and they started believing in each other," Pray said. "I noticed they started doing things a little more outside the rink together. There were dinners and get-togethers and going to movies. And it was all the guys. It was really, really nice to see."

West Seneca West struck first when Griffin Finnegan gave the Indians a 1-0 lead 1:57 into the game.

But Tyler Hunt gave his team the lift it needed when he scored a short-handed goal off a turnover in the West Seneca West end. 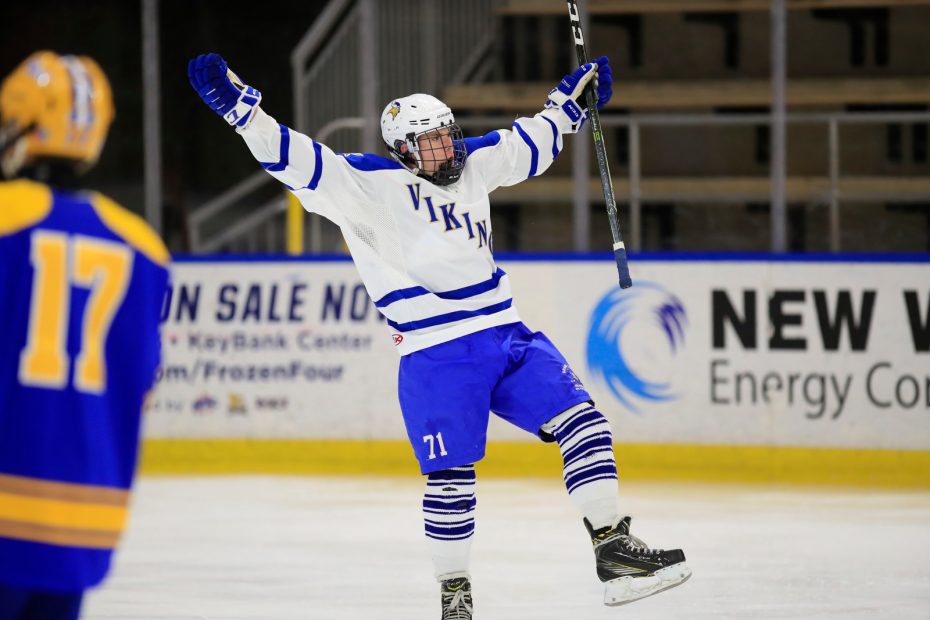 Brian O'Neill gave GI the lead, but the Indians, who were the NYSPHSAA D2 runners-up last year, didn't fold. They had better puck pursuit in the second period and kept GI goalie Nathan Stroh, who earned MVP honors, on his toes.

"I think our relationships throughout the team and our closeness (helped)," Hunt said. "We mesh very well and it helped us out on the ice."

St. Joe's advances to the CHSAAA tourney and will face either Fordham Prep or Xavier on Saturday at Harborcenter at 1 p.m.

Brendan Krawczyk got the defending Niagara Cup-champion Lancers on the board with a first-period goal. But Floccare answered  with the first of his two goals. 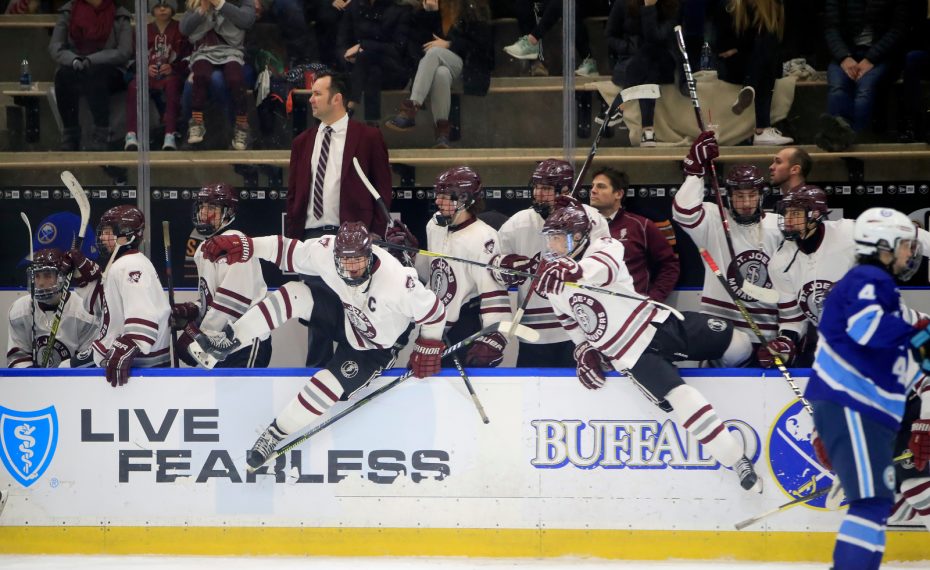 After falling to the Lancers in last year's title game, the Marauders were reminded they can't ever assume a win. They came back this season more focused and determined and it showed on the ice, especially Monday. St.Joe's built a 4-1 lead on goals by Matt Orlowski, Floccare's second and Sam Latorre. Once they took the lead, the Marauders simply never let up.

St. Joe's got the redemption it was looking for after the way last season ended.

"I just think last year we got a little surprised and we didn't play a championship game," St. Joe's coach Rich Crozier said. "I think that hung with us all year. It left a bad taste in our mouth and we weren't going to take anything for granted this year. We got together that first practice in the middle of the ice and we said 'Hey, we've got some goals this year' and this was one of them. And it's such a nice accomplishment." 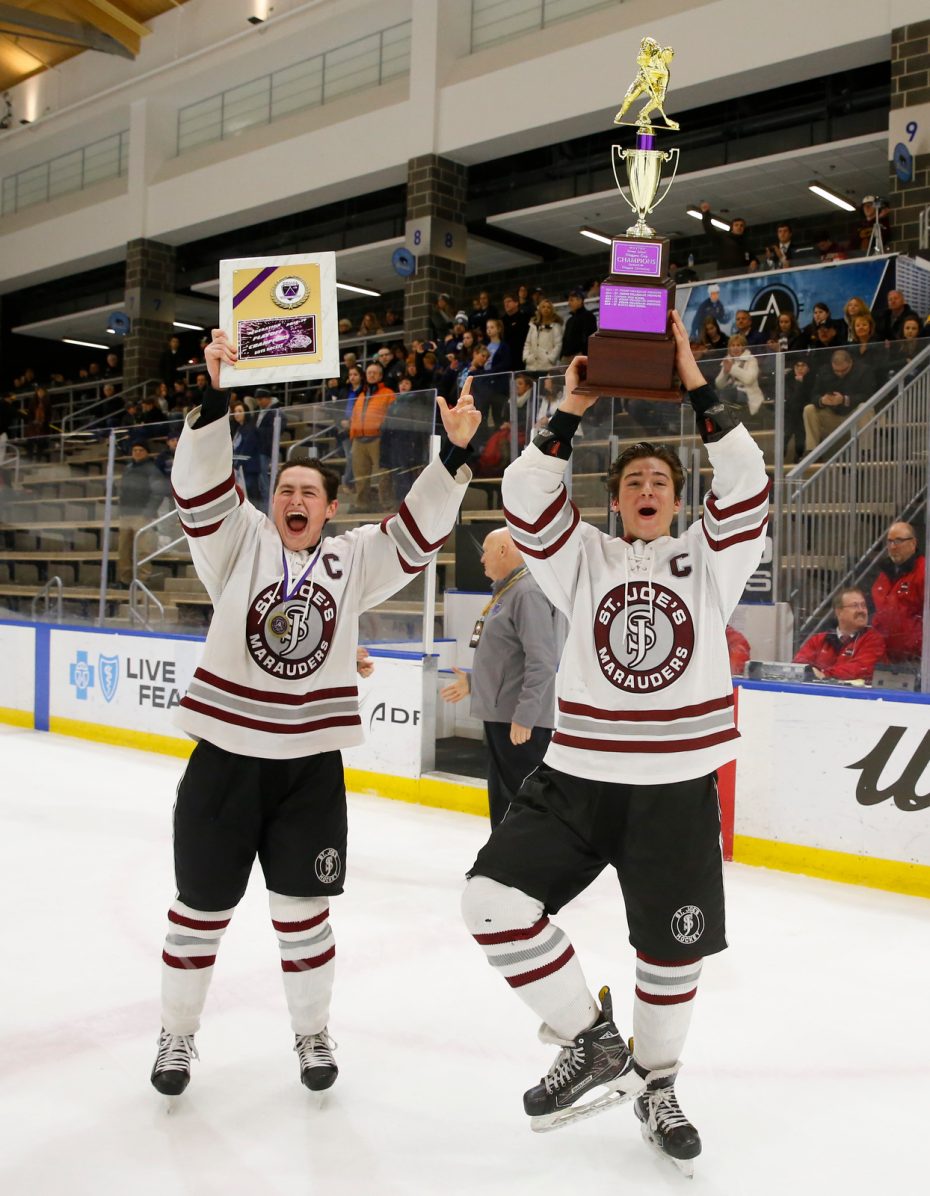 Floccare agreed that this group brought a more complete effort all season and never lost focus of the end goal of winning a state title.

"Yeah, last year was tough," Floccare said. "I feel like this year we probably wanted it more."

While Floccare's two goals were important, his work on the defensive end was just as vital.

"Mitchell has been great for us all year," Crosier said. "He's a special player. We talked about it all the time. In big games, you need your big players to step up and Mitchell did."

For the Lancers, who beat Canisius in three overtimes to reach the championship game, they feel they have established themselves as a legitimate power.

"Hats off to St. Joe's. They're a good hockey team. They deserve it. There's no doubt about it," St. Mary's coach Mark Dantonio said. "I just hope they can go to the Catholic finals and win it. Something that we couldn't do last year and I hope they do it this year."

“It’s unbelievable,” Mecca said. “Just having the opportunity to represent your school in its first-ever (appearance) in the sectional finals is unreal. To be able to get the win is just even better. I’m speechless right now.”

The Quakers advance to the Division 1 regionals on Saturday against Section IV Ithaca.

Orchard Park used a pair of third-period goals to put the game away.