Three years and four months after Gigi's restaurant was gutted by fire, the iconic East Side eatery is up and cooking with gas.

Gigi's officially reopened Monday in the Northland Workforce Training Center building, at 683 Northland Ave. – about two miles away from the landmark building it occupied for nearly six decades at 257 East Ferry St.

Blondine Harvin, the restaurant's original owner, died in January. Her son, Darryl – who now helms the business – expressed gratitude Monday over his mother's legacy having risen from the ashes in a new facility and new location.

"The line has not stopped," Darryl Harvin said of the foot traffic into the new Gigi's.

"It's been nonstop all day. Friends and family have come back to support us. I did not think it would be like this," he added.

East Side resident and longtime Gigi's patron Rob Coleman, who attended the reopening with members of his family, said he was excited that the restaurant had finally reopened.

Harvin said it has been a long journey to the restaurant's reopening, which was made possible through assistance from the offices of Gov. Andrew M. Cuomo and Mayor Byron W. Brown, as well as the Common Council and Empire State Development.

Brown, who spoke at the grand reopening, along with Lt. Gov. Kathy Hochul and Stephen Tucker, president and chief executive officer of the Northland center, acknowledged the struggle to reopen.

"This has been a difficult journey since fire destroyed the landmark Gigi's restaurant. We made a commitment that the restaurant would reopen," Brown said. 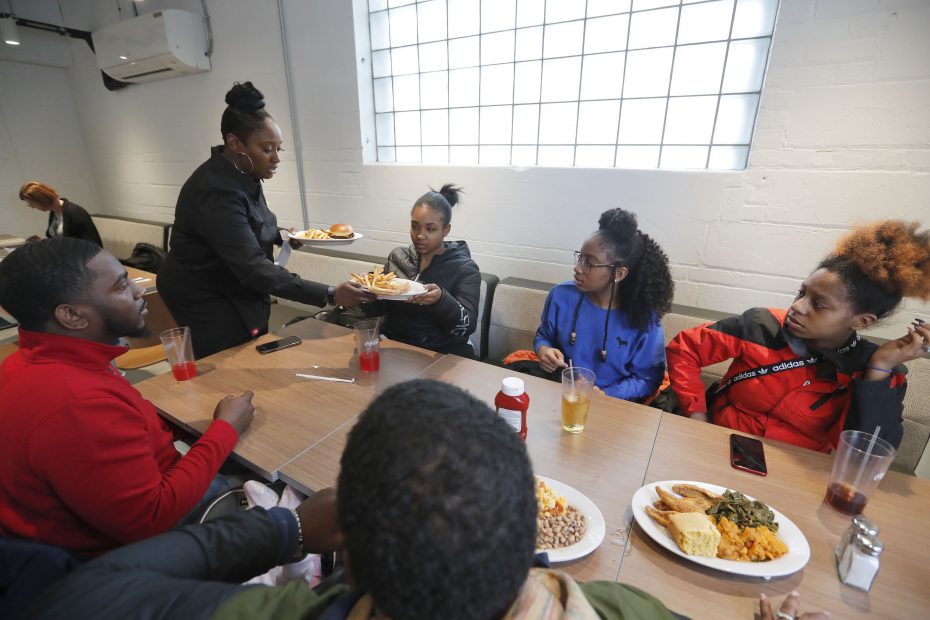 "You can't have a Buffalo without a Gigi's. I'm sorry. When I'm in New York City, people go to Sylvia's (restaurant) for soul food, in Harlem," said Hochul.

"When you come to Buffalo, yes, there's wings, beef on weck, but there's only one place that has the soul food. It's not just the soul food, because this is literally the heart and soul of this community," she added.

Brown, a New York City native who recalled his first visit to Gigi's more than four decades ago, described the reopening as bittersweet.

Blondine Harvin, 80, fed the famous and the homeless at Gigi's restaurant

Darryl Harvin said his mother purchased the restaurant from a woman who went on to become a successful model and actress. His mother rechristened it Gigi's in 1960.

"I wanted to be my own boss," Blondine Harvin told The Buffalo News in 2011. "So when I heard Gigi's was up for sale, I bought it. But I really didn't know what I was getting into. I knew nothing about owning a restaurant, and didn't think about the consequences. I was just young and foolish."

Asked if he thought his mother would be proud of his efforts to keep her legacy going, Darryl Harvin indulged a bit of reflection.

"I would hope she would say she's was proud. I think that she would. She would have some stern words for me in terms of how I'm handling some things, but I know deep down in her heart she would be very proud," Harvin said.

"This is for her. She would be very proud and very happy. She did not give up on Gigi's. I was able to keep forging forward for her and now she's upstairs looking down," he added.