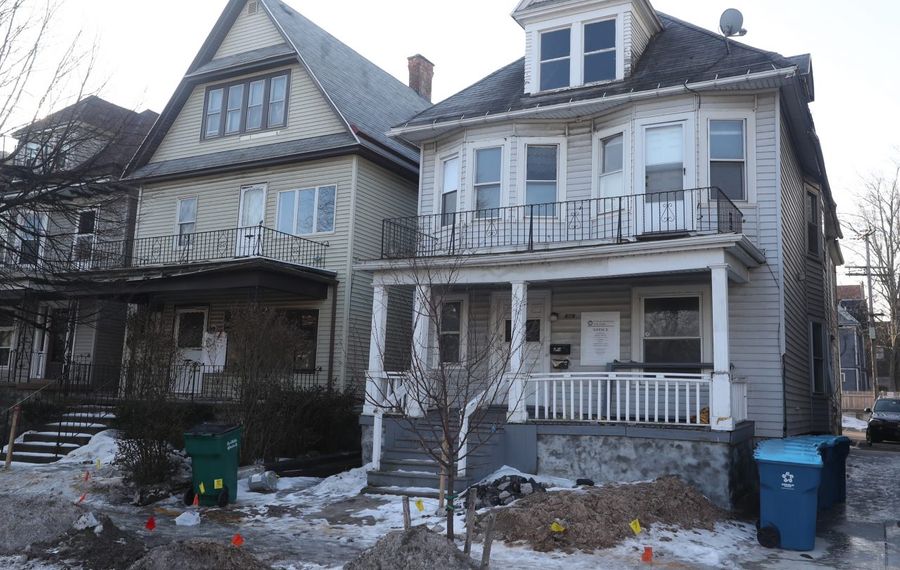 Two houses in an historic section of Elmwood Village are expected to be demolished soon over the objections of some in the community.

The houses at 619 and 621 West Delavan Avenue are part of Elmwood Historic District (East), which received a National Register of Historic Places designation in March 2016. The buildings are owned by Ellicott Development, and are located behind 905 Elmwood Ave., a commercial property the developer opened in spring 2017 that's home to JT's Urban Italian and Neo Gift Studio.

With a site plan that calls for two new single-family residences and no variances, the project is in compliance with the Green Code, the city's zoning and land use policy. That means no hearings with the Planning Board or Zoning Board are necessary, and a public meeting isn't required.

The neighborhood's federal landmark designation also doesn't offer protection against demolition. The case is required to go before the Preservation Board, but its decision is only advisory. For buildings that have local landmark status — which these houses don't — the board can deny demolition, although the decision can be appealed to the Common Council.

The new houses are expected to be approved by the city's planning director, which will then allow the developer to obtain a demolition permit.

"In one sense, we adopt the Green Code and want developers to know exactly what they can build on a site to expedite the process, and not have multiple layers of review if they comply with the code," Delaware Council Member Joel Feroleto said.

"However, in this instance, complying with the code eliminates any public input," he said.

Though not required, Ellicott Development will hold a community informational meeting in the coming weeks at Feroleto's request.

Tom Fox, Ellicott Development's director of development, said the neighborhood will benefit from the new structures.

"The houses there now are in deplorable shape, and it was cost-prohibitive to rehabilitate them," Fox said about the unoccupied, multi-family houses.

The house nearest to Elmwood was used for years for storage and other non-residential uses by the previous owner, who operated a gas station and service shop.

"I think this will be an equal improvement and a quality investment in this section of Elmwood Village," Fox said.

Construction will start this spring and be completed in the fall if the application is accepted, he said.

But critics say the early-20th-century buildings should be salvaged and restored.

"The houses have been allowed to deteriorate since they were purchased by Ellicott Development," said Gretchen Cercone, who lives in the Elmwood Village. "If there is anyone who could rehab them, it would be one of the city's largest construction-real estate companies."

Local resident Julie Carter shares that view. "Part of the reason this district is on the National Register of Historic Places is because of the beautiful historic homes that this developer plans to demolish on the pretense that the houses can't be saved," she said.

Last summer, the proposal was voted down by the Buffalo Preservation Board in its advisory capacity, and two variances sought by the developer were rejected by the city's Zoning Board of Appeals. This time, the developer didn't seek any variances.

"These were really minor issues that were pretty simple for them to correct," said Nadine Marrero, the city's planning director. "As long as [the application] meets all the standards in the Unified Development Ordinance, it will be approved."

Assemblyman Sean Ryan, a critic of the planned demolition, said he is glad a public meeting is being held.

"I share the concerns of the many residents and business owners who have contacted my office about the proposed demolitions," Ryan said. "Last year I urged the property owners to work with the community to preserve these vital neighborhood assets."

Ryan said he hopes the public meeting gives community members "the opportunity to voice their concerns about this major proposal."

Cercone said she doesn't expect the meeting to accomplish anything, though she did not point out how the Green Code was being violated.

"Holding a community meeting well after plans requiring more demolitions have already been submitted to the city is too little too late," Cercone said.

She is also critical of Feroleto, who she said "stands on the sidelines" rather than taking a stand against demolitions of Elmwood Village properties listed on the National Register.

But Feroleto said the Green Code makes it clear the project can proceed.

"If it complies with the Green Code there are no grounds to challenge it," Feroleto said.

The councilman is researching adding an amendment to the code that would require a public hearing at the Planning Board when similar demolitions are involved.

"I think a lot of people are frustrated because there are no public hearings," he said.

Jessie Fisher, executive director of Preservation Buffalo Niagara, said she would also like to see a public hearing in these situations. She said it is already within the discretion of the city's planning director, who is also the zoning administrator under the Green Code.