Travis Yost has been involved in the world of hockey analytics for a decade and is currently part of TSN's Hockey Analytics team. Prior to joining TSN, Travis was a contributor at the Ottawa Citizen, the Sporting News and NHL Numbers, and has been a consultant for an NHL franchise. He will be contributing breakdowns on the Sabres for The Buffalo News this season. Follow Travis on Twitter: @travisyost.

The trade deadline is here, and there might be no better opportunity for the Sabres to trade defenseman Rasmus Ristolainen.

Ristolainen, now in his sixth professional season, has logged 407 NHL games for the Sabres. Most of those games have looked relatively the same, with the Sabres routinely outclassed by superior competition from around the league. No defender was leaned on more heavily during those games, and most of Ristolainen’s shifts – even to this day – were defense-oriented minutes against the opposition’s most competent attackers.

The Sabres have always been killed in those minutes, and it has led to increasing scrutiny around Ristolainen’s game – especially as the talent levels have increased around him. Can the tough minutes really excuse six years of seeing such little favorable performance while on the ice? And for how long do age and experience caveats exist, particularly with so many other young defenders driving substantial results around the league?

I mentioned that the numbers are appalling in the Ristolainen era. That’s true even by Buffalo standards. If you look at the last six seasons, one thing that’s noticeable is how better the Sabres always appear to look with Ristolainen on the bench. 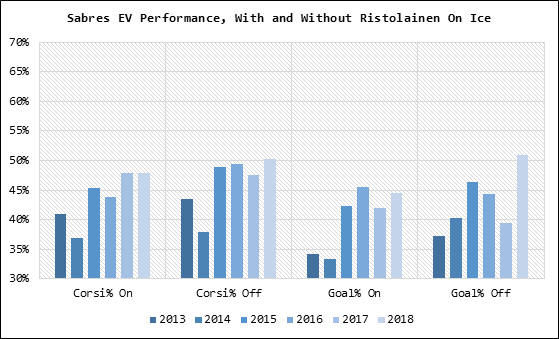 Year after year, we see the Sabres' performance spike when Ristolainen is on the bench. And there is a material difference. By these key performance measures, Buffalo sees a 1.2 percent increase in goal differential, and a 1.7 percent increase in shot differential. If Ristolainen were providing considerable top-pairing value, we would expect to see the results flipped. (It is worth noting that scoring chances are also negative, though not shown here.)

So we know Buffalo is a better team with Ristolainen off the ice, but what we haven’t yet quantified is how much context is impacting Ristolainen’s numbers. If Ristolainen has been so plagued with defensive zone starts and relentless shifts against elite attacking competition, we would expect he and his teammates’ performance to appear ugly.

How do we answer this question? One of the things we can do is appropriately adjust for these contextual factors, and then look at how Ristolainen has impacted the play of his teammates in those minutes. Again, high-end defenders (or high-end skaters for that matter) have appreciable and measurable impact not just on individual performance, but team-level performance as well. So let’s look at how Ristolainen has impacted these measures while adjusting for context, and we’ll use Evolving Hockey’s methodology to accomplish this.

Let’s again look at shot and goal rates, per 60 minutes. Does context (specifically the talent of his teammates) soften how ugly Ristolainen’s numbers are? 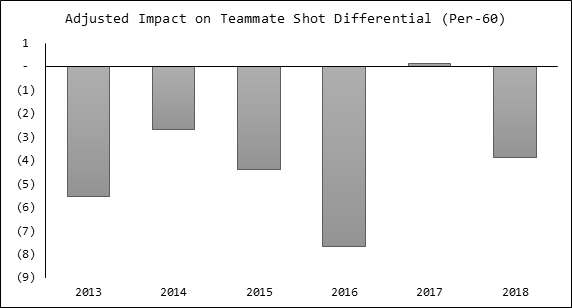 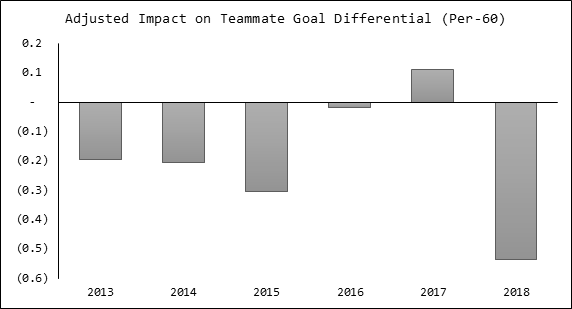 The short answer is no. Even when accounting for critical contextual and environmental factors, Ristolainen has generally been a drag on team performance. Recent years have seen those numbers move closer towards breaking even, but the reality is Buffalo still struggles (in some cases, rather emphatically) with Ristolainen on the ice.

So why should the Sabres considering trading Ristolainen now? There are obviously a few reasons, but none might be more important than the acquisition of Brandon Montour from Anaheim. For years the issue on the Sabres blue line was simply that they were short on NHL-caliber bodies. This acquisition gives Buffalo a credible first pairing between the aforementioned Montour and blue-chipper Rasmus Dahlin, which means that we will likely see even more displacement of Ristolainen’s minutes to other, more capable Sabres defenders.

And then it begs the question: Is it worth paying a second-pairing defenseman with unfavorable results $5.4 million over the next four seasons? Particularly so in an environment where defenders are being moved for large trade returns relative to their talent levels. Already we have seen defenders Jake Muzzin, Ben Lovejoy and Nick Jensen return high-quality compensation packages. Considering Ristolainen’s relatively young age and his reputation around the league, it would seem sensible that Buffalo maximizes on a seller’s market for these type of defenders.

But lastly, there is tremendous value in being the team that figures out a player is bad (or good!) before others around the league. No team should have a better understanding of what Ristolainen can and can’t do than Buffalo, and if the Sabres can convince another team that Ristolainen is still a salvageable first-pairing talent (as opposed to an OK second-pairing option), they should make it their highest priority today. They would more than recoup the assets lost in the Montour trade, and the on-ice performance may even improve as a result.