That Dec. 28, 2008 windstorm — which left more than 30,000 customers in Western New York without power, LaSalle Park flooded by wind-driven waves from Lake Erie and Route 5 in Athol Springs closed to Southtowns motorists — provides a glimpse of what the Buffalo Niagara region should gird for on Sunday.

“That is a significant amount of wind and that is nothing to be trifled with,” Gov. Andrew M. Cuomo said at a news conference Saturday afternoon in Hamburg. "Seventy-five mph winds are something to be taken very, very seriously."

Cuomo, Lt. Gov. Kathy Hochul, Buffalo Mayor Byron W. Brown and other local officials met with reporters in the hangar of the state Department of Transportation's maintenance garage on Lakeview Road to outline some of the state's storm preparations that included road closures and public advisories.

‘I know Erie County is tough…we’re hardy. But, 75 mph winds are something to be taken very seriously.’ ⁦@NYGovCuomo⁩ said of Sunday’s expected storm. #Buffalo #NYwx pic.twitter.com/4mIFIfBMdv

Winds gusts are expected to begin ramping up significantly by mid-morning Sunday, according to the National Weather Service.

"It's going to be a high-impact wind event," said Aaron Reynolds, a weather service meteorologist.

The weather is being generated by an anomalously strong low pressure system tracking from the Great Lakes into upper Canada. 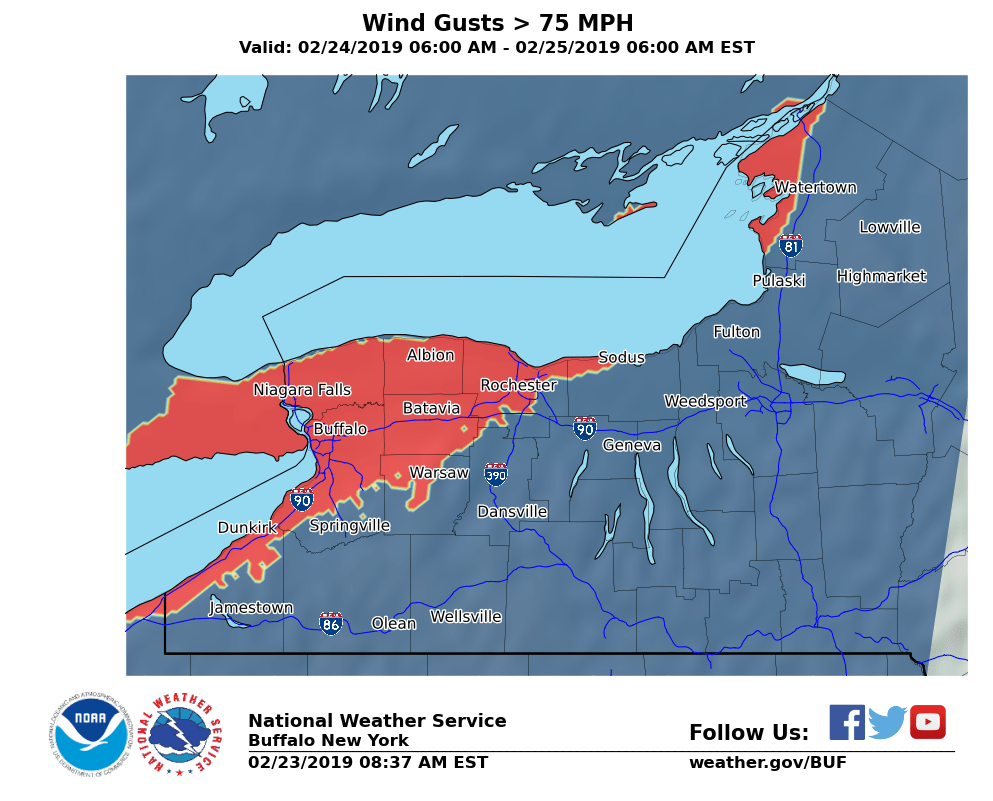 The Niagara Frontier and lake shore areas from Ripley to Rochester are expected to take the brunt of the winds Sunday. Some gusts could exceed 75 mph. Wind gusts over at least 60 mph are expected across the rest of the region. (National Weather Service)

Behind the late morning passage of the cold front, wind gusts are forecast to jump from about 40 mph to 75 mph by about 1 p.m. Gusts over 70 mph are forecast through the early evening hours and are expected to remain above 50 mph through dawn on Monday, forecasts show.

"Winds of this magnitude will produce widespread power outages that may last for days, along with extensive tree and power line damage," the weather service said. "Property damage to shingles and siding is likely, and buildings under construction and older buildings that are starting to deteriorate may experience significant damage."

Brown said heeding these warnings will be important.

"These are hurricane-level wind gusts, so that is to be taken very, very seriously," Brown said.

Buffalo began preparing earlier in the weekend for the storm. The state provided stand-by generators, chain saws and chippers to the city.

Police finalized plans for officers to attend to traffic control in places where power is knocked out to signals. And fire personnel will staff the city's Emergency Operations Center at 8 a.m. Sunday.

"We are as prepared as we can be for what Mother Nature will throw at us," Brown said.

Cuomo also directed state agencies to move emergency response equipment to Western New York to cope with the expected damage from the winds.

“Hopefully Mother Nature gives us a break. Because we deserve it,” the governor said. "We hope for the best and prepare for the worst. And that's what we're doing here."

The state's Division of Homeland Security and Emergency Services is coordinating with other state agencies and local governments to ensure resources are available where needed. Thousands of state workers, from troopers to transportation workers, are on standby and will be called in if needed, the governor said.

"The state is very good that way," Cuomo said. "Western New York has come to the rescue of downstate New York many, many times. And the same is true in reverse." 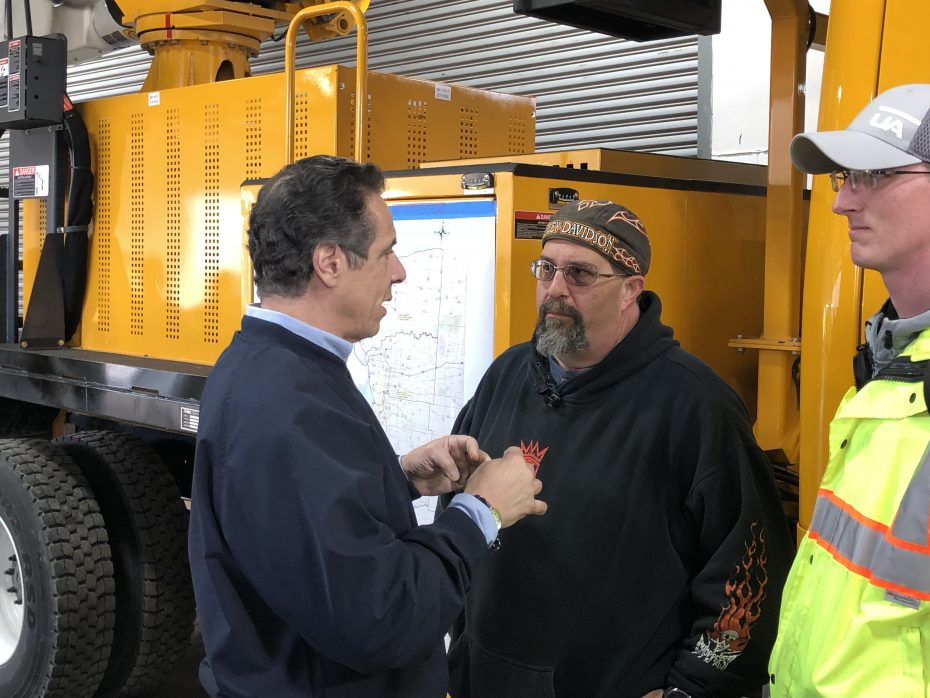 Cuomo on Saturday also activated 100 members of the National Guard to respond to debris clearing missions. Utility companies have also been put on notice by the governor to swiftly respond to power outages.

"New York is preparing to endure yet another extreme weather event that could bring strong winds resulting in significant power outages," Cuomo said. "I want to make it abundantly clear that utilities are expected to be prepared with response plans to deal with emergencies and quickly restore power."

"In preparation for the potential for hurricane-force winds moving west to east across portions of upstate New York beginning Sunday morning, National Grid has increased staffing to include more than 3,250 line, service, tree, damage assessment and public safety workers," the utility announced on its website Saturday. "Crews are being pre-positioned this weekend, particularly in western and central New York."

NYSEG said it was deploying more than 2,000 line, tree and service and support workers in advance of the storm.

"If the winds persist, there may be a period of time that we will have to wait to start restoration," NYSEG said. "Restoration and tree crews will focus on cutting and clearing wires and trees to make conditions safe."

Damaging winds Sunday could knock out power 'for several days'

As if the winds aren't problem enough, lake-effect snow is also a real possibility later Sunday into early Monday as colder air rushes in behind the cold front. That's forecast even though 87 percent of the lake was encased in ice as of Saturday.

"Strong winds will break up the ice (on the lake) and you will have some open areas of water on the lake," Reynolds said.

Winter weather advisories are posted across Western New York from Sunday into Monday.

In northern Erie County, including metro Buffalo, and Genesee County, up to 3 inches of snow is possible by early Monday morning. As much as 5 inches is forecast in southern Erie County along with Wyoming, Chautauqua and Cattaraugus counties, the weather service said.