Kathy Reynolds decided to get serious about running after her youngest of three children started kindergarten.

“I decided I needed something for me,” said Reynolds, who was 39 at the time. “I knew that I could run. It was something I had done before, back in high school, but not very much.”

Reynolds caught the running bug right away. She has participated in dozens of races during the last 11 years, including several Ironman competitions, but marathons have become her favorite. She has run 26 in all, including in Big Sur, Philadelphia and six times in Boston. She has enjoyed Buffalo Marathon weekend every year since 2008 – at least mostly.

“The first one was fun – for most of the race,” said Reynolds, of Amherst. “One friend came in at mile 20. That friend, to this day, says he’s never heard me say a cross word but that the last three miles were very bad. My husband said later, ‘It sounds like it was like giving childbirth.’ ”

Reynolds has learned a lot since. Now 50, and an active member of several regional running clubs, she recently shared some of her top distance running tips, as did her sometimes running coach, Vicki Mitchell.

“If it’s someone who has never run a step in their life, a marathon certainly is an aggressive goal for your very first running encounter,” said Mitchell, also coach of the University at Buffalo track and cross-country teams.

Those who start running to lose weight should first consider a shorter, safer distance, like a 5K – 3.1 miles, as compared to a 26.2-mile marathon. Those who haven’t exercised should talk with a primary care provider and get a physical exam before setting out on a distance running trajectory.

“Another factor is your real-life schedule,” Mitchell said. “How many commitments do you have? Do you have the time to put in training for a marathon? On weekends, the progressively longer runs are going to take two hours, three hours, maybe more than that, once a week.”

Mitchell – also the running coach for the Checkers Athletic Club – tells students of all ages they need to see time spent running as one way to prioritize a healthier way of living, and to avoid the mindset they are making a big sacrifice. “I always think there’s a way to do it, but you have to plan for a marathon – and really any kind of physical exercise,” she said. 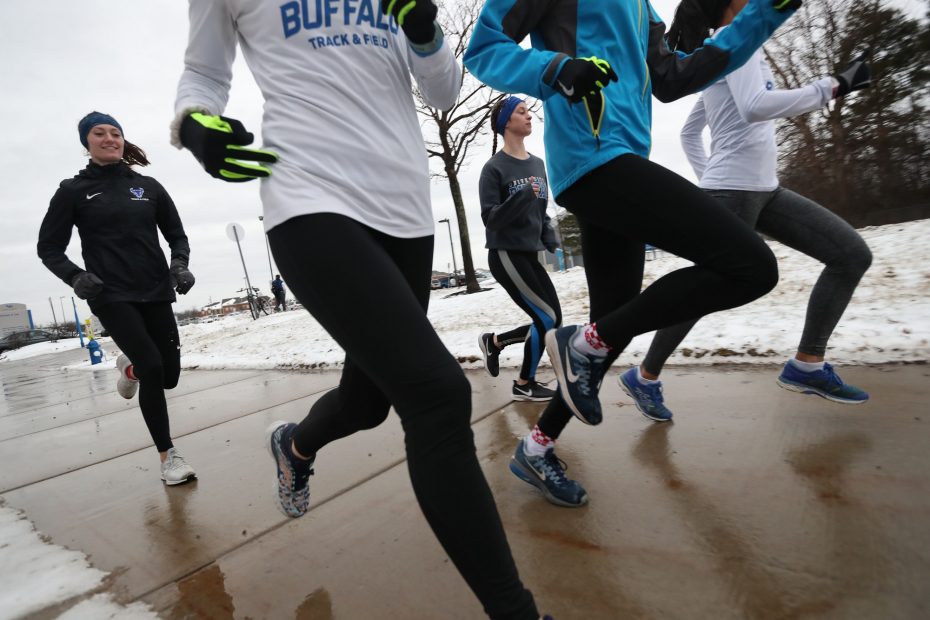 Vicki Mitchell coaches the University at Buffalo track and cross-country teams. Team members run outside even in most winter weather, including, in back from left, Lily Meek and Marlee Shaffer. (Sharon Cantillon/Buffalo News)

You don’t want to just show up at the starting line of any distance race. You risk injury or dropping out.

“If you’re well prepared for something, your experience can be much more enjoyable,” Mitchell said.

The running coach created training programs available at buffalomarathon.com for several Buffalo Marathon Weekend distance runs, for novice, intermediate and more advanced runners. She likes first-time marathon runners to start about 18 weeks before the race. (There are 13 weeks before this year’s marathon on May 26, so start soon if you haven’t already.) Marathon training gradually builds weekly distance miles from at least 10 to 30 per week. Shorter races take less training, but it still needs to be consistent, with varied distances, she said.

Reynolds started running in September 2007 with a goal to run her first 5K that November. She ran Tuesday and Thursday mornings with a friend, and a longer distance on weekends with members of Checkers. Her first Buffalo Turkey Trot followed a couple of weeks later with newfound friends in the running club. “When you get into that environment of running with all these people who are so enthusiastic about it, it was really enjoyable,” she said.

Clubs tend to be the most popular, and economical, way to help train for races. An experienced trainer is also worth the investment whether you choose to run for time, better health, or to engage – and finish – a challenge. You can find personal and online training for about $50 to $200 a month, depending on frequency of contact, Mitchell said. She recommended the Run Smart Project; Reynolds has used the Hansons Running Method. 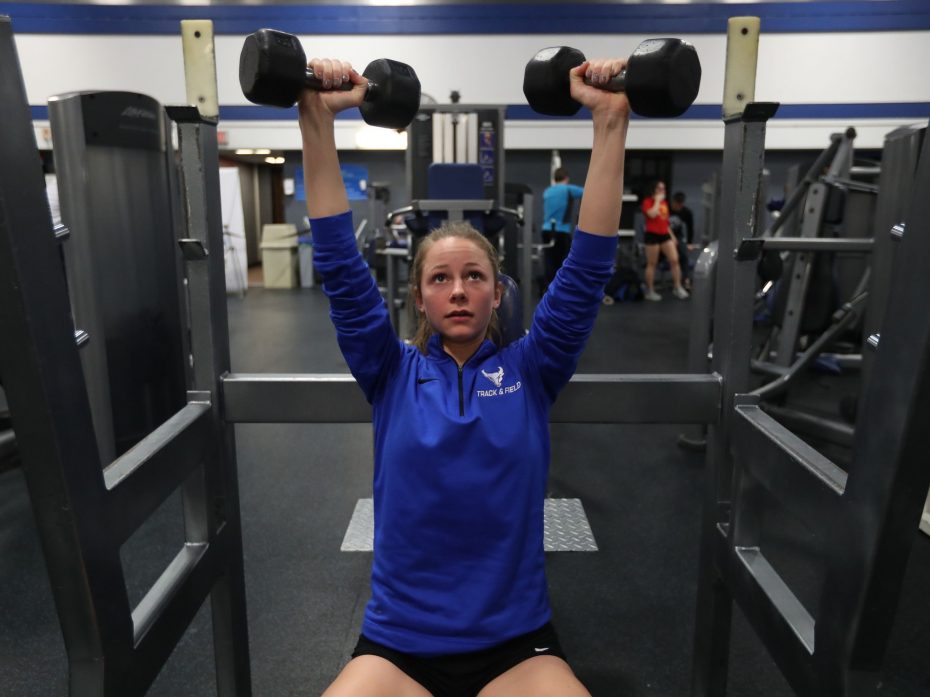 Reynolds, an occupational therapist, builds some flexibility in her run schedule but won’t skip more than a day or two of training. She takes a balanced approach to her weekly fitness regimen, which includes five run days, a power yoga class and a year-round 6 a.m. Wednesday functional training workout with November Project Buffalo.

Mitchell recommends six days of running – inside or out – for advanced runners. For novices, she likes a combination of running plus cardio cross-training like cycling, elliptical or swimming. “We’ve had some challenges over the last few weeks with some uncooperative weather but I am a huge fan of treadmill running,” she said. “You can really be incredibly productive during workouts, long runs, or easy short runs on the treadmill.” 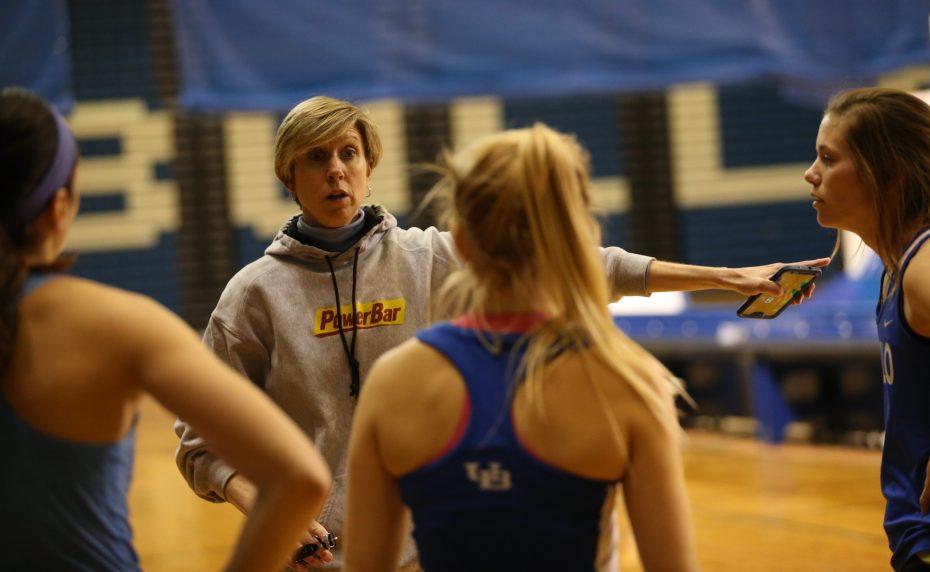 “People think running is the cure all” to a bad diet, Reynolds said. “It isn’t. It’s still calories in and calories out. If you have a beer and a piece of pizza after a 5K, you’ve just blown all of that.”

She drinks lots of water, particularly if she plans to run the following morning. She favors spinach salads, lean meats and complex carbs, which slow digestion. She also advocates eating beets because they contain nitrous oxide, which helps maintain a healthy oxygen level.

Mitchell advised runners, especially those just starting and training for a half-marathon or more, to avoid following the latest diet that claims you can run faster while losing weight. Caloric deficits make it harder to recover. “This is often the place where people can benefit from working with an expert, like a registered dietitian,” she said.

Mitchell also believes sleep is often the most overlooked element for recovery and training. “If there’s one thing I could change with my student athletes at UB,” she said, “they’d all sleep 10 hours a night.”

Covid-19 surpassed cardiovascular disease last month as the leading cause of death in the United States.Dr. Vijay Iyer is among heart specialists who believe that probably changed this month, as the novel coronavirus fatality curve flattened in m…

Knowing where “fueling stands” exist on a long-distance course, the terrain you will tackle and the weather conditions you’re likely to confront all are important. Hydration, and the boost that comes with a quick push of carbs that come in gels and goos can be critical in running your best time and completing a grueling race. Reynolds also likes to use running club friends to help her keep her preplanned running pace. She often volunteers to do so for others, too.

“You get individuals that do all the training in the world and they get to race day and it doesn’t come together because they haven’t worked on that mental approach,” Mitchell said. “That’s very, very important. Are you staying focused on the pace, on your breathing, on your mechanics? There are different ways to gear your mental approach.”

Coping skills help to handle pain and fatigue, she said, and it often takes motivational skills to complete training runs. A sports psychologist at UB helps Mitchell’s collegiate teams. She also recommends books by elite runners who talk about strategies and mindset, including “Let Your Mind Run,” by Deena Kastor and Michelle Hamilton.

Enjoy at any distance

Mitchell and Reynolds both look forward to several races during WNY running season, particularly Buffalo Marathon Weekend, which involves thousands of participants in full, half and relay marathons, as well as several shorter runs.

“We draw people from all over the world,” the running coach said. “To be able to be part of that weekend is pretty special.” 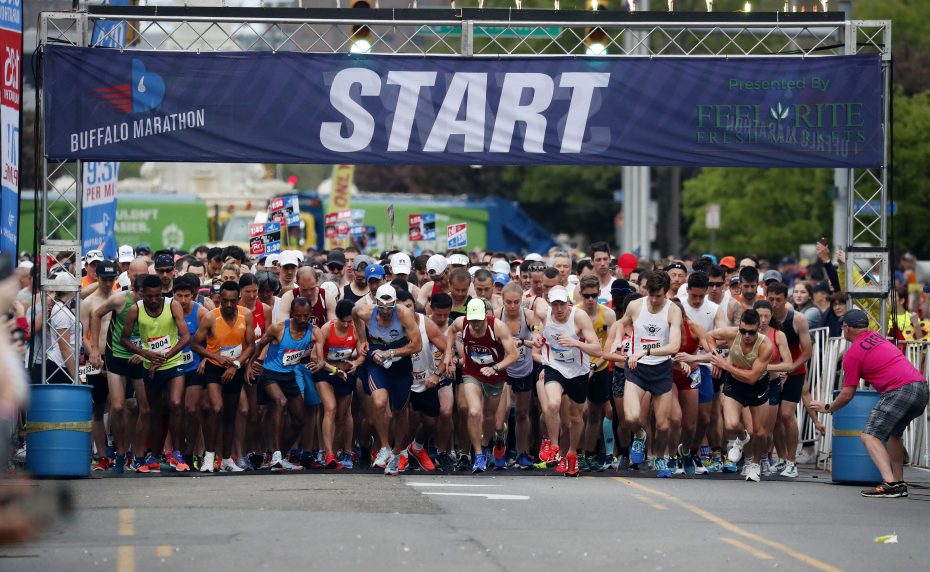 This year's Buffalo Marathon will take place on May 26; it is one of several races scheduled at part of the city's marathon weekend, and among several long-distance races this season in Western New York and Southern Ontario. (Mark Mulville/News file photo)

Longer races in Western New York this year include:

Happy Half: May 11, Holiday Valley, Ellicottville

Buffalo Half and Full Marathon: May 26, Buffalo Niagara Convention Center

Run for the Grapes Half Marathon: Sept. 22 in St. Catharines, Ont. 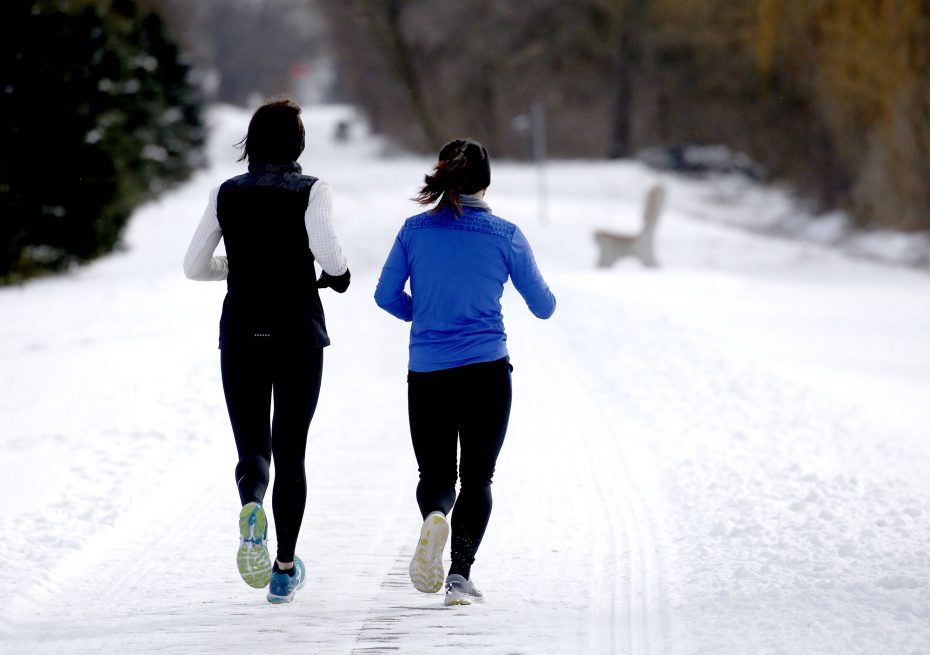 Teresa Darlak, left, and Kathy Reynolds are members of Checkers Athletic Club, one of several running clubs in the region. (Robert Kirkham/Buffalo News)

The following running clubs provide training and the motivation and social support that comes with group running; many charge a membership or participation fee.

Checkers Athletic Club: All-levels running training Tuesday evenings from April to October; its members are regulars at most races in the region.

Committed Athletic Family: Began with the “most active” list of those who run races from the comprehensive list at buffalorunners.com.

Meet Up: The online social media platform has at least two groups.