On Friday nights, Joanne Lorenzo is in a giving mood.

She moves around Niagara Falls, looking for people who need a bite to eat, a blanket to get warm or maybe just a smile.

In her 23 years of running the Magdalene Project, she has asked for only one thing in return: someone to join her in prayer.

"Father, we thank you for his life," the 62-year-old Lorenzo prayed with J.T., whom she found in a motel parking lot on a recent Friday night. "Father, help him to know he has the mind of a Christ ... help him never lose hope."

On this night, Lorenzo and her volunteers brought turkey sandwiches, cookies and blankets, toiletries and bottled water to the city's down-and-out.

J.T., who wouldn't give his full name, walked away with even more – resolve.

"I just want to get on my feet, get a job and do the right thing the rest of my life," said J.T., who recently completed a jail term for robbery. "It really felt good to pray."

The project's name comes from Mary Magdalene, a disciple of Jesus whom tradition identifies as a repentant prostitute. The name reflected Lorenzo's outreach primarily to prostitutes when she began her ministry.

"I especially like working with the girls," Lorenzo said.

She brings roses for them on her Friday night rounds. Lorenzo said it’s to make the women feel special.

Her ministry has grown, and now Lorenzo and her volunteers also distribute donated food and clothes to the homeless, recently freed prisoners and others hanging onto slivers of dignity. 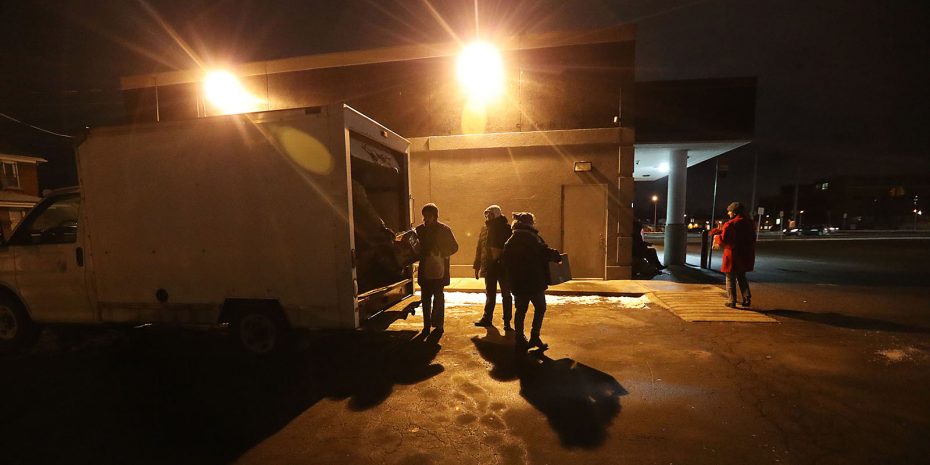 With everything packed up, Joanne Lorenzo and her small team of volunteers head out on the streets Jan. 18. (Sharon Cantillon/Buffalo News) 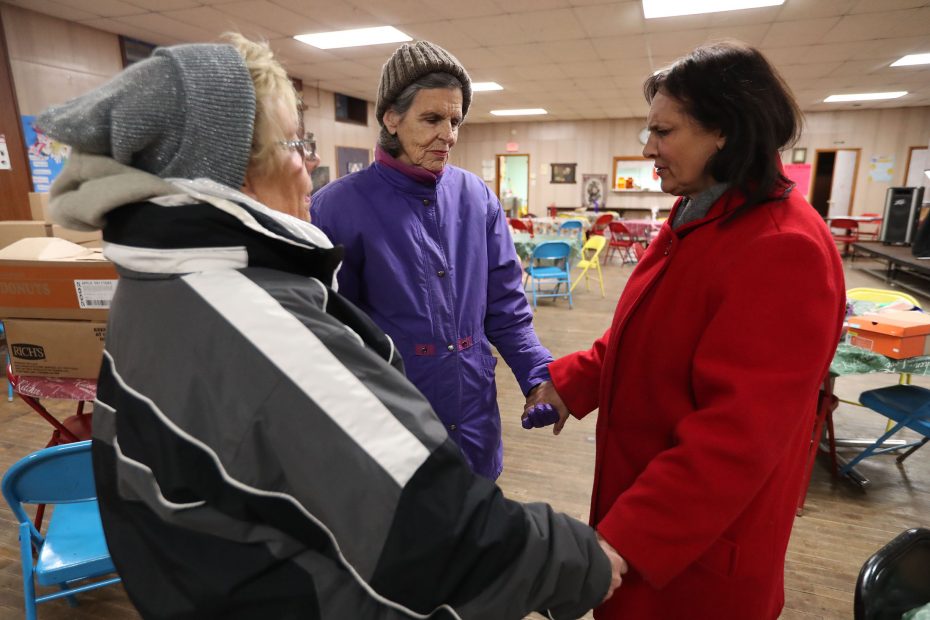 From left, Debbie Donato, Kitty Pierce and Joanne Lorenzo pray before heading out into the streets. (Sharon Cantillon/Buffalo News)

"She's like a legend to us," said Ted Colton, who took shelter in the city's bus station on a recent frigid Friday. "She cares a lot. She's always watching out for us."

Many have accepted her help for months and even years, but don't seem able to change.

"I have to remember, we can’t look at the outcome. We just have to do what God told us to do," said Lorenzo, an ordained deacon in the Anglican church. "We want to tell people that Jesus loves them and they don’t have to live the way they’re living."

It's a message she spreads wherever her ministry takes her – motel parking lots, bus stations and dangerous street corners.

Friday night at the motels

The Enjoy Hotel on Niagara Falls Boulevard is a typical old-style motel, a squat semicircle of small rooms opening onto an ill-lit parking lot, which contains a few vehicles, none of them new.

It seems like a place bypassed by time and occupied by people ignored by society.

Lorenzo hopped from her rattling old white cube van and started at the end nearest the street, pounding on each door.

Fifteen or 20 people emerged into the cold, some shrugging on coats, others wearing only street clothes as they shuffled toward the back of the van, where a volunteer offered them food and blankets.

The available items change from week to week, depending on donations. This was one of the better-supplied nights. 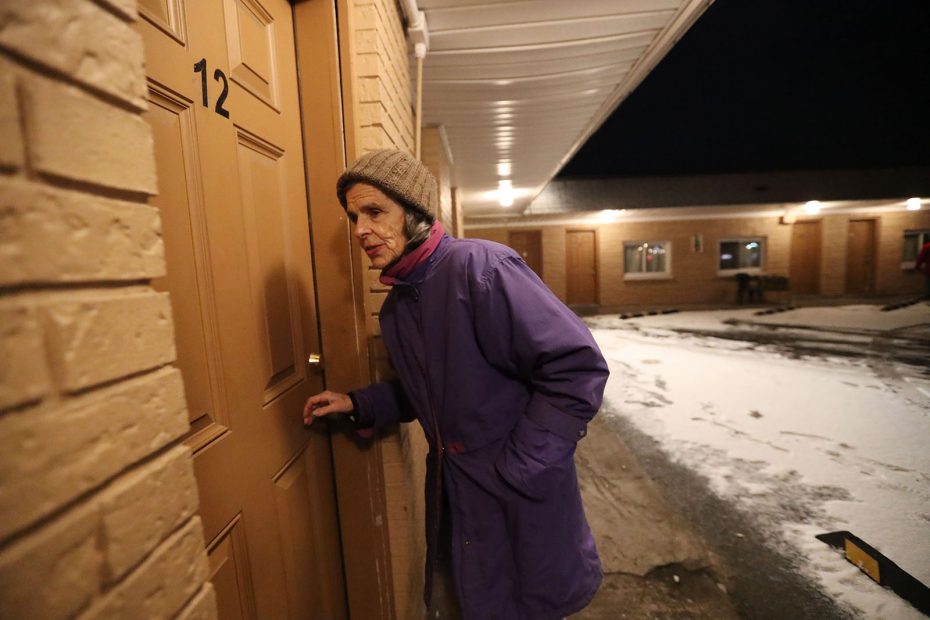 Kitty Pierce knocks on the doors and let people know they are there with food, blankets and toiletries. (Sharon Cantillon/Buffalo News)

Often, Lorenzo already knows most of the people she meets. On this night, there were only one or two newcomers.

One woman complained that some of the items she received had been stolen, along with her other property.

"I'm getting sick of this," the woman shouted.

Lorenzo calmed her. "I got two pair of (size) 9 shoes for you at my house," she replied.

Volunteer Kitty Pierce took the name of a man who said he didn't have a winter coat. The team would try to bring him one.

Lorenzo asked the recipients of her charity to pray with her. Several did.

"I literally feel power when she prays," said an ex-convict, who declined to give his name.

A female domestic violence victim, living with four daughters in a tiny room at another motel, received food, clothing and stuffed animals for her kids.

"It's very important to me," the mother said. 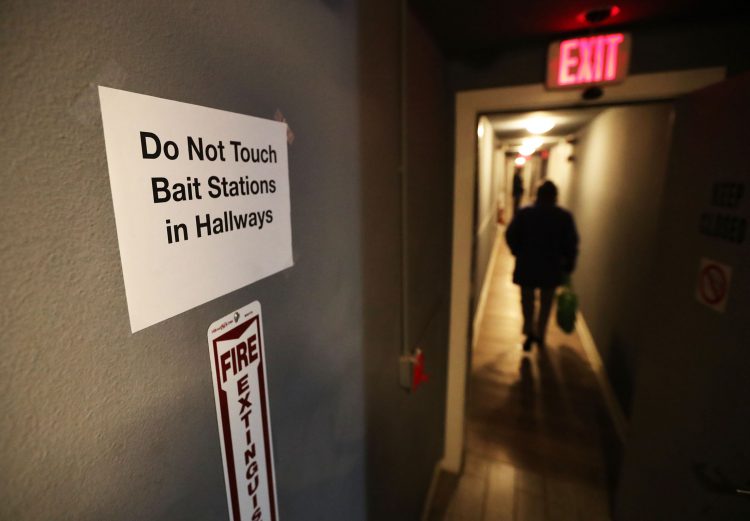 The last stop of the night for Lorenzo's group is at the Midtown Inn, a boarding house on Niagara Street, where there are roach motels all around the building. (Sharon Cantillon/Buffalo News)

At a third stop, Lorenzo met Joe and Michelle, who fled a bedbug-infested Buffalo apartment. She asked the couple if they could afford other lodging.

“No. We’re gonna pray about that," Joe replied.

Lorenzo recommended Community Missions. "At least it’ll be somewhere for you to stay that’s stable. So think about it. God bless you," Lorenzo said.

"Thank you. I need it," Michelle answered.

The Niagara Falls bus station on Portage Road is a magnet for the homeless.

There are plenty of seats. The tile floor is clean. There are restrooms. It's open about 21 hours a day, and despite the glass walls, it's warm.

Again, Lorenzo and her team knew most of the quiet people waiting for them. They offered food bags and knit caps.

"Take this one. It's really warm and it would fit you," Kitty Pierce told Archie Heard, who smiled and took the cap.

A woman with a black eye sat in her boyfriend's lap. She wouldn't give her name but blamed the injury on a fall. Volunteer Debbie Donato embraced her and prayed.

Another time, Pierce brought washcloths, which were a hit.

"You can use them as a scarf. You can put them around your neck," Pierce said. "I'm going to bring these every time."

James Griggs received a washcloth and a new pair of gray socks.

"I need to be able to take a bath," Griggs said. "I got socks. I got a change of clothes. I just need to wash my face." 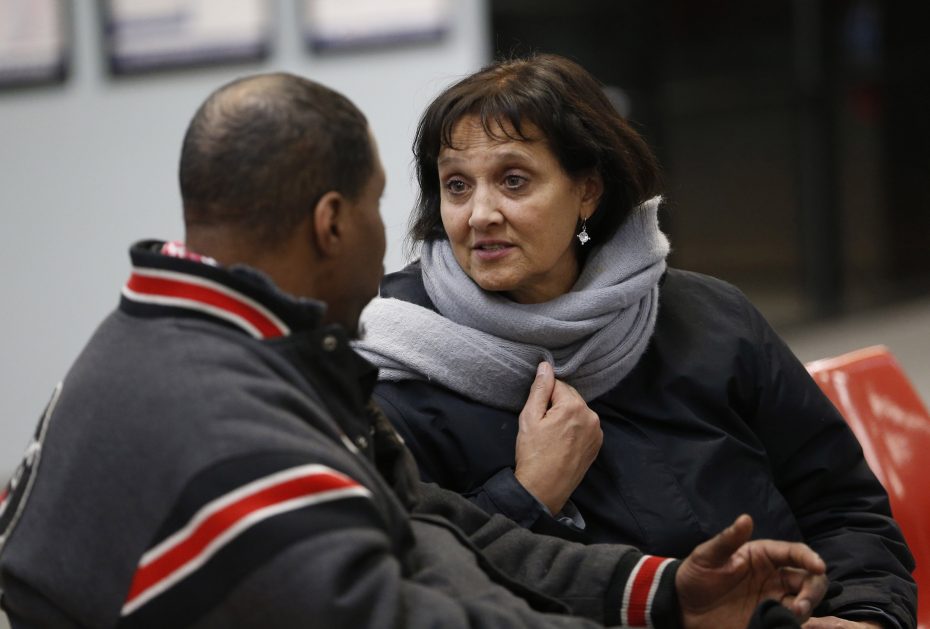 Joanne Lorenzo talks to James Griggs, 47, who is homeless. He admits to being kicked out of many different homeless shelters and programs because of his alcoholism. (Sharon Cantillon/Buffalo News)

Bus stations and motel parking lots are not the music halls Lorenzo trained for as a student decades ago.

For three years, she played percussion in the New Jersey Symphony Orchestra. She found it "boring" and returned to Buffalo in the mid-1980s.

"I played jazz vibes in Buffalo a lot," Lorenzo said.

Like most musicians, she needed a day job. She became a teller at M&T Bank's Niagara Falls office.

About that same time, her grandmother gave her a pamphlet about a New York City pastor's street ministry. It impressed Lorenzo, a lapsed Baptist.

Soon afterward, while in New York City for a musical recital, she visited the pastor's church.

"That's when I rededicated my life to God," she said. "I was in this bad relationship in Buffalo, and I felt like I couldn’t get out of it because I had no self-esteem. So I started praying and I started reading my Bible." 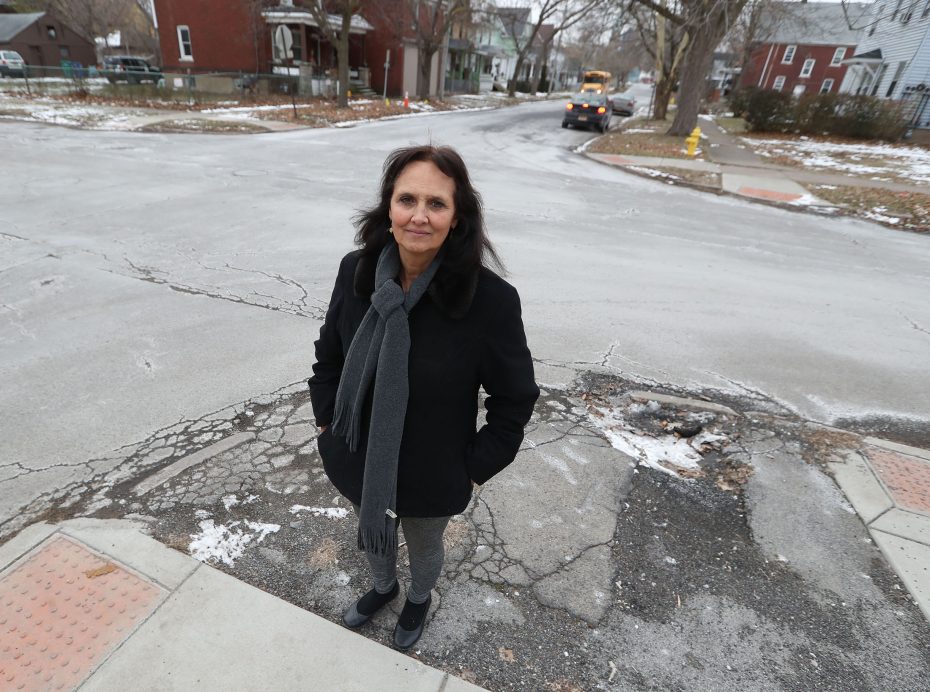 Joanne Lorenzo at 19th and Niagara streets, one of the poorest areas in Niagara Falls – a location that is frequented by prostitutes and the neighborhood in which Lorenzo lives. (Sharon Cantillon/Buffalo News)

After five days in New York, Lorenzo dumped her boyfriend, started going to church and moved to Niagara Falls.

"It changed my life," Lorenzo said.

Then she married another man.

"I shouldn’t have married him. He wasn’t a believer like I was," Lorenzo said.

They lived in Canada, and Lorenzo commuted to her bank job in Niagara Falls.

One day, a friend asked, "Do you want to go over to the United States and pass out Bible tracts?"

For three straight days, Lorenzo called in sick. She passed out religious literature and prayed with people on the streets of Niagara Falls.

Lorenzo's marriage ended, and she returned to Niagara Falls.

With no income, she stayed at Community Missions. Before long, they hired her.

"She was our kitchen supervisor and food pantry supervisor for close to 14 years," Executive Director Robyn L. Krueger said. "She was doing Magdalene Project while she was working for us."

Besides the Rose Café, a women-only event, Lorenzo offers a children's after-school program on Tuesdays; substance abuse recovery meetings on Thursdays; dinners for street people on Thursdays and lunches on Saturdays; and a Christmas dinner, which in December drew more than 200 people.

"She gets a lot of things on her plate, but that’s because of her heart," said Anne Skinner, head of Hannah House, another Niagara Falls ministry. "She just cares, you know?"

Lorenzo acknowledges she can become frustrated.

"Sometimes I wonder if we’re making a difference," she said. "But then there’s always that one light where you see somebody’s not doing drugs anymore, somebody’s not going to jail anymore. That is encouraging."

She's thinking about returning to a job at Community Missions.

But her street work will continue, Lorenzo said, "probably for the rest of my life." 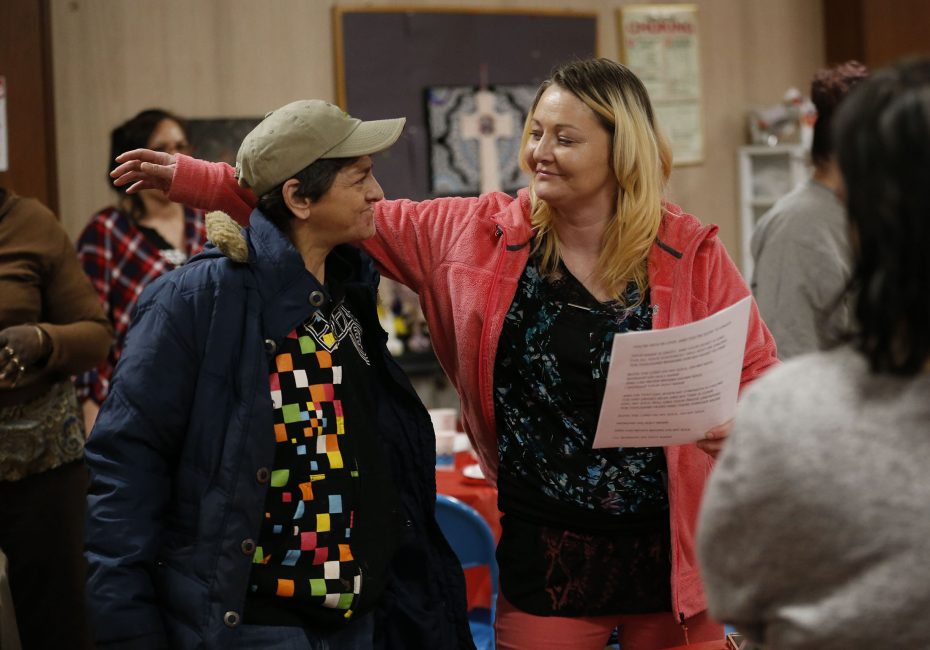 The Rose Café, offered about once a month at Lighthouse Church, provides dinner, worship, a message, a clothes giveaway and drawing prizes to the women who attend. The café event helps women spiritually and physically. It makes them feel like they belong somewhere, a place abounding with unconditional love. Many of them have burned bridges with family, so they especially need a place where they feel they belong.

About 25 women – most with histories of drug addiction, homelessness and prostitution – came to the Rose Café on a recent Saturday night.

Amber Rowlett, one of the women, met Lorenzo at a Bible study class in the Niagara County Jail. 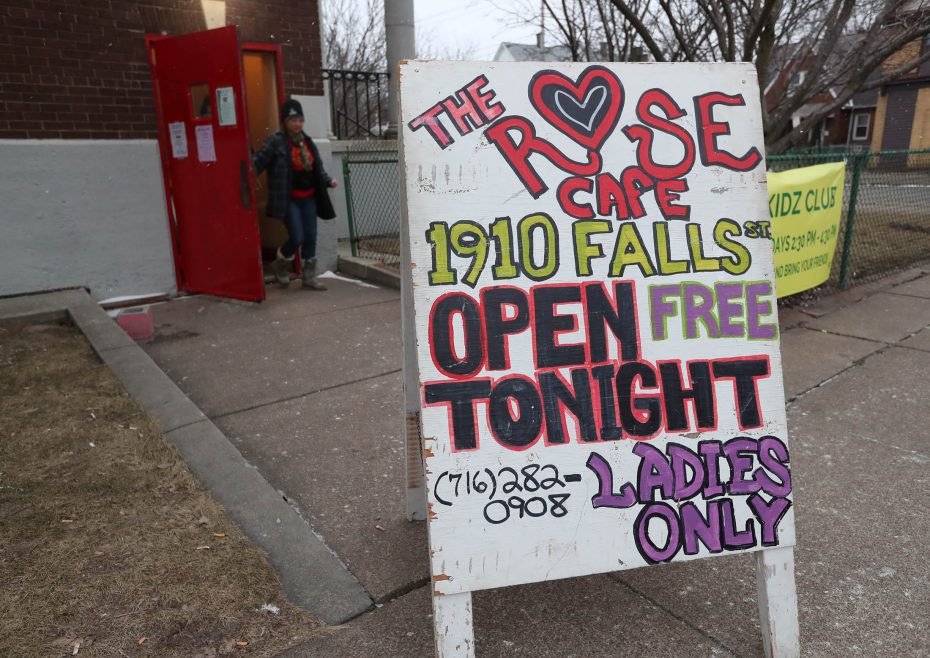 Rowlett had recently battled a landlord for three months over a pest-infested apartment.

"I was at Social Services about a week ago," Rowlett said earlier this month. "I came out of the room and here she is. She hugged me; we prayed together," Rowlett said. "All of a sudden, that day, things started happening."

Within days, Rowlett and her child found a new apartment.

Sheila Tatroe was a nurse until she was injured by a patient in an assault. She ended up on the streets, addicted to heroin and fentanyl.

"Joanne, the last two years, has helped me with food and clothing and spiritual encouragement," Tatroe said.

Another woman at the café, Ann Marie, was a homeless crack addict and a sometime prostitute for 10 years. Now she's a businesswoman, and she credits the Magdalene Project.

The Rose Café provides that love.

"It's difficult sometimes to love because you keep seeing them do the same thing over and over and over, but you’ve got to keep loving them, no matter what," Lorenzo said. "We all think loving is easy, but it’s not."

For more information on the Magdalene Project, visit magdalene-project.org. 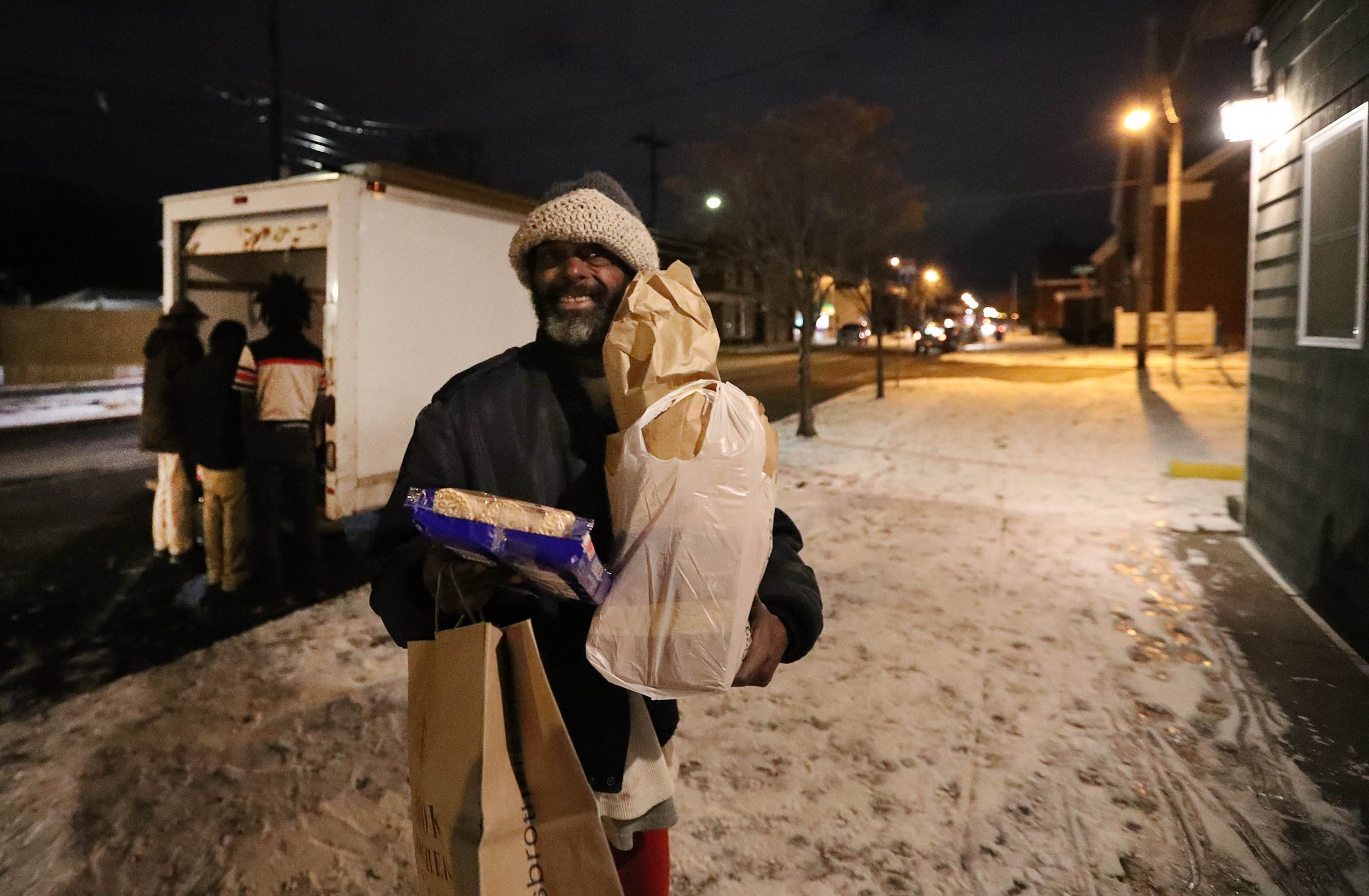 Alphonso Moody heads back into his home with groceries, toiletries and other gifts from Joanne Lorenzo's group. (Sharon Cantillon/Buffalo News)

[RELATED: Too many plastic bags? Help the homeless by making them into sleeping mats.]