Model run after run, there has been remarkable agreement on the likely severity of the coming high wind outbreak which will develop during Sunday into Sunday night.

With that in mind, the National Weather Service's Buffalo office elevated what had been a high wind watch to a high wind warning early on Friday. With average wind speeds increasing to 30-40 mph later Sunday morning behind a strong cold front, and some peak gusts approaching 70-75 mph, widespread damage and many power outages can be expected.

The duration of the powerful winds will be lengthy, possibly exceeding 12 hours, and that stress on trees and vulnerable property adds to the threat.

Analogs of past very similar and relatively rare events have been examined. Basically, meteorologists can look back at what occurred the last time a low pressure storm system of similar intensity followed the path most similar to the modeled path for this low. This model output is in good agreement with other models for the surface map depiction around midday Sunday. The number 978 near the low, millibars of barometric pressure, is exceptionally low, meaning there is no doubt this will be a powerful storm.

The color legend on the right represents knots in average wind speed, not peak gusts. Note the winds are strongest over the relatively smoother Lake Erie surface. The SW orientation of the wind following cold frontal passage, along with the intensity, position and path of the low is the setup most favored for damaging winds in Western New York. The winds accelerate over the lake with higher terrain north and south of the lake helping to “funnel” the wind up the fetch of the lake. The wind typically picks up more speed traveling the path of the lake.

The fact that the many different models we use have been in such good agreement increases forecast confidence this will be a major event. In addition to the widespread property damage potential, there is the threat to the Lake Erie shoreline, up to and including the Buffalo harbor and even the Niagara River shoreline. On lakeshore damage, there is greater uncertainty. As you know, Lake Erie is mostly ice-covered. However, the U.S. Coast Guard estimates the ice is mostly 6-12 inches thick, with thinner ice along the north shore.

Damaging winds Sunday could knock out power 'for several days'

Winds of this magnitude will break up some of the ice, but in unpredictable ways.

There is no computer model which can predict how many slabs of ice may be driven up onto the shoreline, and exactly how high the lake seiche of rising waters pushed by the southwest wind will be in such circumstances. A GOES satellite image from 9:14 a.m. EST Friday shows some nearly open water near Long Point, and numerous cracks in the ice away from the shoreline. The ice closer to our Lake Erie shoreline is still more fixed.

So, on closer examination, this is not the look of a lake with very stable ice. Moreover, a thaw will be underway this weekend into early Sunday afternoon, abetted by prefrontal rain early on Sunday, and maybe a rumble of thunder. Then, dry, cold air will rush in behind the late morning cold front, and the sun may even come out for a few hours.

Ice slabs driven onto the shore can do a lot of damage. On our property, which overlooks a large creek, recent rising waters from last week drove large slaps of ice onto our shoreline, completely flattening about 15 feet of fence – and that was with no wind involved. (I discovered this last night when two of our dogs got skunked despite our “impenetrable” barrier. The evidence of this breach is still in the air as I type.)

The Buffalo Harbor will be impacted as well, and ice will be driven over the ice boom. There is a high probability the boom will be damaged under these rare extreme conditions, and some ice slabs will then race down the Niagara River, threatening docks and other shoreline structures. 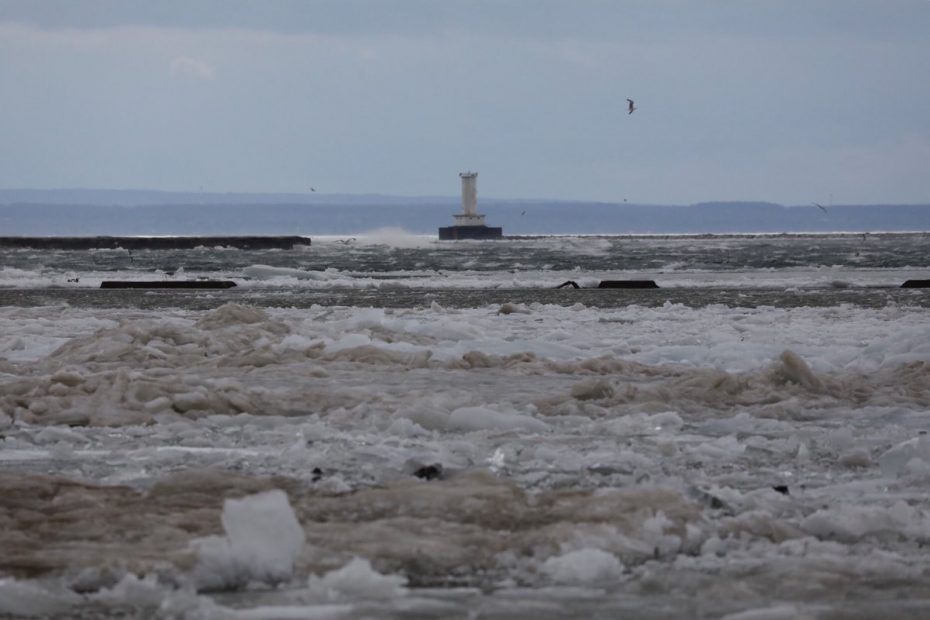 Because of the length and breadth of this coming windstorm, power outages will be numerous. With the workload on line crews, quite a few neighborhoods may have to endure lengthy outages. Lost power in mild weather is bad enough, but these winds will be pushing in much colder temperatures.

Sunday early highs will be in the mid-50s, but temperatures will tumble into the 30s by later in the day and into the 20s Sunday night and Monday with daytime highs Monday to Wednesday in the upper 20s. The wind chill index is a tool to measure heat loss from exposed skin. However, wind chill will definitely take a toll on heat loss from roofs and windows during the period of high winds Sunday night and strong winds on Monday morning. Hopefully, you already know whether your fireplace is in good working order and your flues are clear. Battery operated carbon monoxide detectors will be especially important during these outages.

As for lighting, candles can be a real fire hazard when mishandled and don’t throw that much light. You may want to quickly invest in some battery powered LED lights. Overall, here are tips supplied by NYSEG on what preparations should be undertaken in the event of a long outage. This is definitely worth reading now, not when the windstorm is upon us.

All of us with sump pumps not backed up with generators or batteries will have to monitor our basements and, as per the link above, use caution in entering flooded basements. Outdoor property which can be picked up by the wind needs to be secured.

Try to avoid parking your car downwind of vulnerable trees; that is, to the east or northeast of such a tree. Shallow rooted trees, mainly pines, in the muddy soil will be the most vulnerable to being downed. (If your sense of direction is shaky, Lake Erie is to the west or southwest of most locations. The winds will be blowing from west-southwest toward the east-northeast.

As an offshoot of these cold winds, some lake-effect snow will be developing Sunday night into Monday, with the same uncertainties we’ve experienced in recent weeks because of variable ice cover which cannot be modeled. Here is the updated NWS Buffalo wind forecast.

In the second box down, the upper line on the graph represents peak wind gusts in mph. Note the winds are really peaking by later Sunday afternoon, though high winds will begin ramping up by later Sunday morning. Sustained winds will average 30-40 mph, but peak gusts may reach 70-75 mph, though probably not quite as ferocious in Cattaraugus and Allegany Counties where gusts may approach 60-65 mph. The direction of sustained winds in the lower line suggest most organized lake snow will tend to be steered to the hilly terrain by Monday morning on a west-northwest flow, though some could be close to the metro area late Sunday evening, especially the southern half of the metro area. Any snow, obviously, will result in blowing snow and poor visibility.

The time to prepare is Friday into Saturday night. If all this sounds unduly alarmist, I remind you the NWS and other responsible meteorologists agree this is, unfortunately, a high confidence forecast. If you’re a “I’ll believe it when I see it!” type, you may regret that complacency.