Kelly Babstock quizzed her Buffalo Beauts teammates on the bus rides to away games, pulling the questions from a study guide used to prepare immigrants for a civics test required to become U.S. citizens, one of the final hurdles on a path that stretches for years.

The test has written and oral components, and there are 100 potential questions. Candidates for citizenship are presented with 10, at random, and must answer six correctly to pass. Some are more difficult than others. A sampling:

Who wrote the Declaration of Independence?

The House of Representatives has how many voting members?

Who lived in America before the Europeans arrived?

That one was simple.

Babstock, a two-time All-Star forward who plays for the Beauts of the National Women’s Hockey League, was born in Canada and is a member of the Ojibway tribe, also known as the Chippewas. She is originally from Little Current, a town nestled on the northeast side of Manitoulin Island in Lake Huron, an area widely recognized as Ontario but technically in the Wiikwemkoong Unceded Territory, a First Nation reserve governed by the Council of Three Fires.

“I’m very proud of my roots,” Babstock said. “But I went the route of becoming an American citizen because I wanted to potentially still live here, and since I had the opportunity to have dual citizenship, that’s what I wanted to do. I love living in America. It’s been my home for nine years.”

Babstock, 26, had a relatively straightforward path to citizenship.

And yet the process lasted six years.

Babstock already knew how to read, write and speak English, which are requirements.

She was raised in Mississauga, in suburban Toronto, and was recruited to play hockey at Quinnipiac University in Connecticut.

Babstock liked the idea of playing for a school named to honor the tribe that once inhabited the area, and to help build its improving women’s hockey program.

The international border was no obstacle because Canadian citizens with documented proof of ancestry and at least 50 percent First Nations blood cannot be denied admission to the United States, a law that traces its roots to the Jay Treaty, signed by the U.S. and Great Britain in 1794.

Babstock, whose mother is Ojibway and father is from Newfoundland, was entitled to enter the United States for employment, study, retirement, investing and/or immigration, simply by presenting her Indian status card, an ID issued by the Canadian government.

She starred for Quinnipiac from 2010 to ’14, racking up 203 points in 147 career games to become the program’s all-time leading scorer.

By her junior year, the U.S. felt like home, and she decided to stay.

Babstock, who has been invited to hockey camps with Team Canada and Team USA, had little trouble obtaining a green card, which is required to establish lawful permanent residency and typically must be renewed every 10 years. The card authorizes its holder to live and work in the United States, but the status comes with limitations, including an inability to vote.

A green card also is required to obtain a Social Security number, a U.S. driver’s license and become an American citizen, which is a possibility after living in the country for at least five years.

“A lot of people don’t get (citizenship) that easy,” Babstock said. “They have to wait like 10, 20 years. Like they’re from different countries far from here. But because of my roots, it was a much easier process.”

Another stipulation is being a person of “good moral character,” often demonstrated with a clean criminal record and history of paying taxes.

Then, of course, comes the test.

What are two rights in the Declaration of Independence?

How many amendments does the Constitution have?

What is the economic system in the United States?

Back on the bus, after signing a one-year deal with the Beauts, Babstock peppered her new teammates during the season-opening trip to face the Connecticut Whale, the team she played with for the first three seasons of her pro career.

“I had the book out, and I was like, ‘All right. I’m going to quiz everyone. Put your hand up if you know the answer,’ ” Babstock said. “Nicole Hensley knew everything. But the other gals, they were like, ‘I don’t remember this from school.’ It was fun.”

Who was the President during World War I?

Who is the Chief Justice of the United States now?

“I actually learned quite a bit,” said Beauts forward Annika Zalewski, who was raised near Utica. “I realized I’m lacking a little knowledge.”

Babstock was twice named to the NWHL All-Star game, but never reached the Isobel Cup Final. The Beauts have appeared in all three since the league’s inception, winning the championship in 2017.

The Beauts will play their regular season home finale against the Metropolitan Riveters on Saturday at Harborcenter, then have two more road games before the playoffs.

Babstock chose to sign with Buffalo last offseason, leaving her second home of Connecticut to move closer to her first. The City of Good Neighbors is a 90-minute drive from her family in Mississauga. And she still returns to the Wiikwemkoong Unceded Territory, where her family owns a cabin and visits each summer. Last year, she ran hockey and lacrosse shooting stations during “Wiky Fun Day” and spoke at a youth conference, discussing the importance of school and sports on the reserve.

Once settled in Buffalo, she buckled down herself.

What is one power of the federal government?

What are two ways that Americans can participate in their democracy?

Babstock became a U.S. citizen during a naturalization ceremony Jan. 29 at KeyBank Center, where she was among 109 immigrants from 41 countries to take the oath of allegiance, according to records from U.S. Citizenship and Immigration Services. The oath is the final step to becoming a citizen.

She then led the group in the Pledge of Allegiance.

"It’s a big deal, you know?" Babstock said. "You’re Native American, and you have these rights, and I just took advantage of them."

The day has finally come... and after 8.5 years in the USA, I am officially an American Citizen! #lovetheprocess #NorthAmerican #GodBlessAmerica https://t.co/obqzb0Qdz7

Babstock’s mom, grandmother and two of her sisters attended the ceremony, as did several of her Beauts teammates, who posed for a group photo beside an American flag and replica of the Statue of Liberty.

“Citizenship is maybe something we take for granted, or we don’t realize how special it is to other people,” Zalewski said, “because after that, she was so pumped to be American, and for all of those people it was a huge moment for them, so I think in that regard, maybe we don’t realize we’re lucky to live here in the States and have citizenship.”

Former Buffalo Sabres forward Cody McCormick, a Canadian of Oneida and Ojibway descent who took over as the Beauts’ coach and general manager midway through the season, was heartened by the outpouring.

“Just seeing how happy everybody else was for her, you can tell how tight they are and how much Kelly means to that group,” McCormick said.

Babstock said she intends to throw a big party to celebrate her American citizenship, likely this summer. She’s thinking food trucks. But at the time, the revelry was brief. Babstock and her teammates hustled across the street.

They were late to practice. 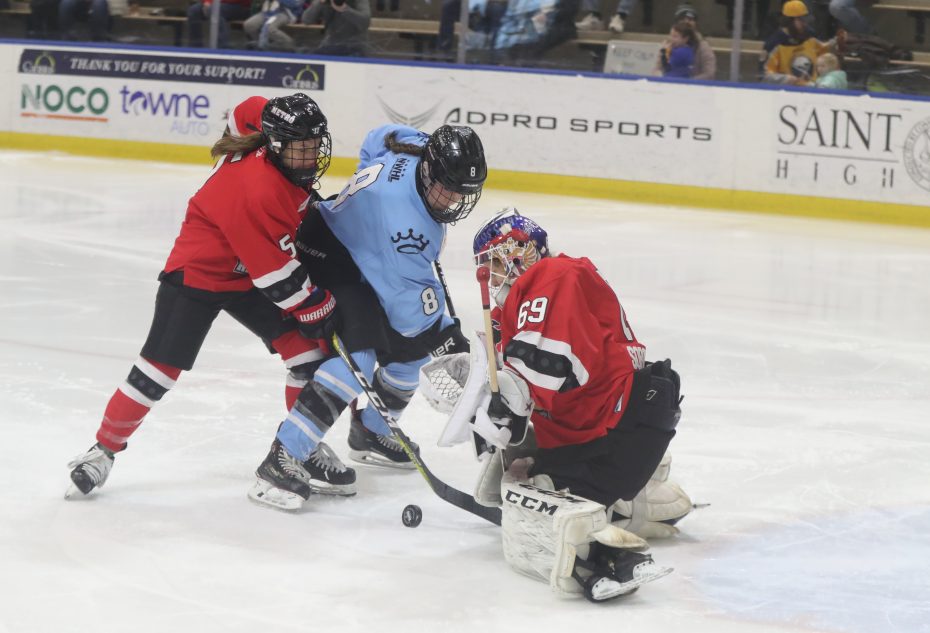 Did you correctly answer six of the 10 questions in this story?

4 – Life, liberty and pursuit of happiness.

10 – Vote, join a political party, help with a campaign, join a civic group, join a community group, give an elected official your opinion on an issue, call senators and representatives, publicly support or oppose an issue or policy, run for office and write to a newspaper.