The best-known flavors of Buffalo have been ladled from its deep melting pot of immigrant contributions.

Buffalo got it wings from Italians, and beef on kummelweck has German roots. Texas hots and open-faced chicken souvlaki are credited to Greek restaurateurs.

One day, perhaps, owno koksware will join them. The chicken noodle soup with the odd name is the most successful tool in my ongoing mission to de-mystify Burmese food in Buffalo. People who have spooned up its gently flavored coconut milk broth have credited it with being the on-ramp to exploring more the Burmese kitchen has to offer.

Based on the influence of more than 10,000 Burmese immigrants to the Queen City, there’s at least 15 locations serving Burmese dishes to all comers, from downtown to Depew. To give you some background on the most common Burmese dishes and where to find them, here’s a guide to the Buffalo area’s Burmese cuisine.

(Note: Dish names may vary in restaurants, due to the difficulty of Anglicizing Burmese names.)

Owno koksware evokes Burmese geography, since it bears influences from India and Thailand, two neighboring countries. The noodle soup’s broth, thickened with chickpea flour, is golden with turmeric and laced with ginger, hearkening to India, while its coconut milk base and cilantro echoes Thai tom kha soups. Tender egg noodles and dark-meat chicken hide in its depths, while crunchy noodles, red onion and hard-boiled egg beckon from the surface.

Tea leaf salad, le peth thoat, is one of Burma’s most-loved dishes. The best tea leaves aren’t dried for beverage use, they’re fermented like sauerkraut for tangy year-round vegetable use.

Here, they’re coupled with crunchy elements like fried beans and peanuts, plus shaved cabbage, and juicy fresh tomato, the entire assembly tossed in garlic oil, for an engaging plate. It’s vegan, too. (Some places sprinkle a few little dried shrimp on top, but they’re easy to omit by request.) 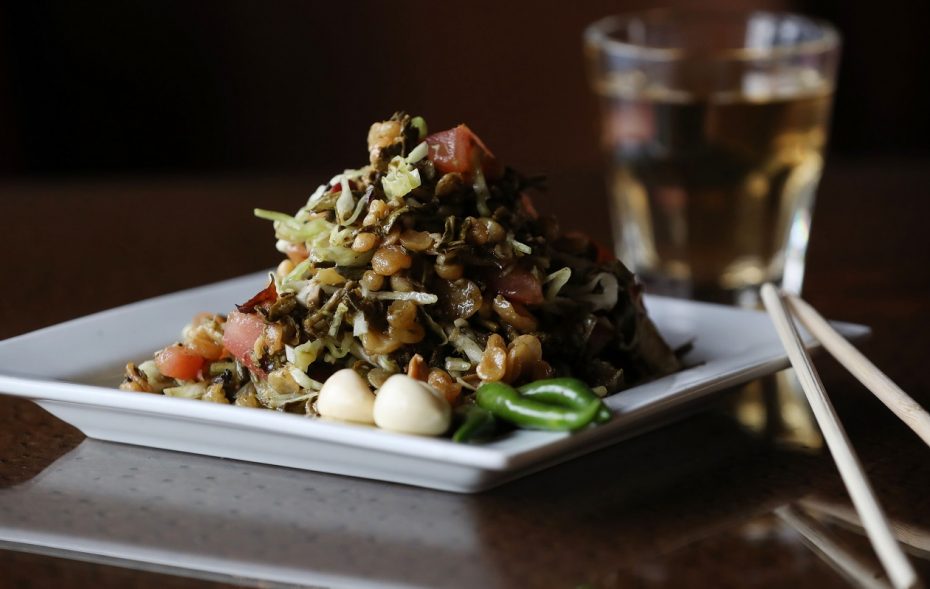 Ginger thoat and tofu thoat are similarly crunchy salads dressed in garlic oil, with tea leaves replaced by shaved fresh ginger and Shan tofu, a creamy cheeselike substance made from a type of chickpea.

Mohinga (pictured at top), fish chowder with rice noodles, is considered Burma’s national dish. A traditional breakfast, it’s available at restaurants throughout the day. Fish is simmered, mashed and flavored with garlic, onions, lemongrass, turmeric and other spices for a beige broth. It’s ladled out on rice noodles, and served with hardboiled egg, onion, cilantro, and fried bean fritters, like crunchy crackers, to add texture.

Sometimes sliced banana stem is included, which sounds exotic but could be mistaken for a pale carrot. Squeeze a lime wedge in, and you’re ready to eat.

Burmese curries are distinguishable from their Indian and Thai cousins by their sauce-to-solids ratio, with the Burmese versions mostly starring proteins. The sauce is dark, almost tarry, of aromatic ginger and onions cooked down to caramelized sweetness.

Bone-in chicken, simmered to practically falling apart, is the predominant version, but chunks of pork shoulder, pork belly, fish steaks, or even hardboiled eggs get the curry treatment. Spooned out over white rice, the flavors are deep but mild and faintly sweet. 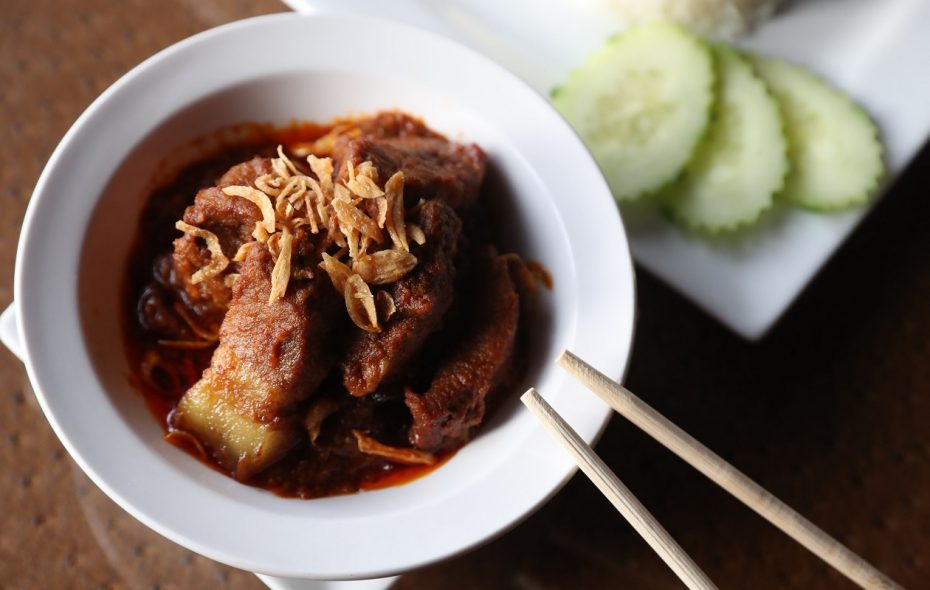 A popular Burmese chicken curry spin-off is an appetizer of curry with paratha, a flatbread that is eaten across numerous south Asian countries. The Burmese version if flaky and multi-layered, griddled in a hot pan to a toasty bronze. Tearing and dipping is the order of the day here.

Biryani has the same name as the aromatic Indian steamed rice casserole, but Burmese versions are subtly different. They both start with basmati rice scented with spices like black and green cardamom, cinnamon and clove. The Burmese version has dark meat chicken, caramelized onion, and cashews, all of which are finished in a ripping hot clay pot. The rice sticks to the sides and bottom to provide crunchy bits.

Kat Kyay Kite is a dish of broad rice noodles or pasta sheets stir-fried with egg, beans, sweet soy and proteins like chicken or shrimp, before being topped with fresh bean sprouts for serving. It’s akin to a Burmese pad Thai, one that’s not as sweet as many of the Americanized Thai versions. This is one Burmese dish that can be presented spicy if desired, so make sure you ask for the heat level you desire.

Mango sticky rice is a Burmese and Thai dessert that depends on the care and selection of mangos for its greatness. There’s only three ingredients: sliced mango, rice, and coconut cream. At its best the tropical perfume of dead-ripe mango infuses every bite. At its not-so-best, with crunchy, underripe mango, you still have a spoonful of sweetness to wrap up your repast.

(Below the map, in which you can click on the restaurants to read more News content about each, they're also listed alphabetically. My favorites are Lin Restaurant, Sun Cuisines, and Lime House, but they all have worthy offerings.)