It was a packed house – 1,600 people were packed into the Fillmore Room at Norton Hall (now Squire Hall) on UB’s South Campus — that showed up to listen to a tiny, nondescript, 77-year-old man talk 50 years of eye pokes and pie tosses.

This wasn’t the first time "The Three Stooges" star Moe Howard played Buffalo — the Stooges were regulars at Glen Park in the '60s and had been on the stage at several Buffalo theaters to debut feature films. It was, however, Moe’s first time in Western New York as a “single,” Vaudeville lingo for a solo act. His brothers Curly and Shemp had died 20 years earlier, and his longtime stage partner, Larry Fine, had been in a nursing home for a few years after suffering a stroke.

This time, he didn’t need those other knuckleheads to entertain people.

Howard stood up and told a few jokes about his age and the Buffalo weather, and he had these college kids – who had grown up watching him as one of "The Three Stooges" – eating out of his hand.

“Every joke, gesture, and comment elicited an exuberant response from his listeners,” wrote Amy Dunkin in a review of the show for the Spectrum, UB's student newspaper. “They were so attuned to Moe and what he represented that there was a constant, mutual exchange of emotional energy from the podium to the floor.”

After showing a few short films, Howard answered questions from the audience that had been written on index cards.

There were lots of questions about Curly, who Moe said always had trouble with his lines. When he couldn’t remember but didn’t want to ruin a take, he’d do one of those memorable floor spins until he could think of the next line.

But the show wasn’t all laughs. Howard’s voice cracked as he talked about his brother Curly’s stroke and how it left Curly's face painfully contorted. He shared that Larry had trouble communicating after his stroke, but that he’d lift Larry’s spirits by sharing the crowds' regards for him the next time they shared a visit.

Most of the stories were for laughs, though. The biggest reaction came from the audience card that read, “I would consider it a giant honor if you hit me with a pie I brought.”

With the pride and precision of a craftsman, Howard explained the science of pie throwing as Gary Apple, who'd driven to Buffalo from Brockport for the appearance, approached the stage with a pie in hand.

Howard explained that the pies the Stooges used to throw were always very light whipped cream in a thin cardboard plate, but this one was a dense fruit pie with an aluminum plate. He broke the crust, to avoid injury and to make the pie splatter more. The wallop knocked the kid back a few feet, but he left the stage to thunderous applause, grinning as he wiped pie from his eyes.

Moe Howard was writing his autobiography when his visited UB in 1974, and he included the story of that pie toss.

“I must say here that never in my career in show business, with or without the other Stooges, have I ever enjoyed such a standing ovation,” wrote Howard. He said he’d come a long way from “Moses Horowitz, high school dropout” to Moe Howard, Stooge, at UB.

Moe Howard died in 1975, about six months after that last visit to Buffalo. 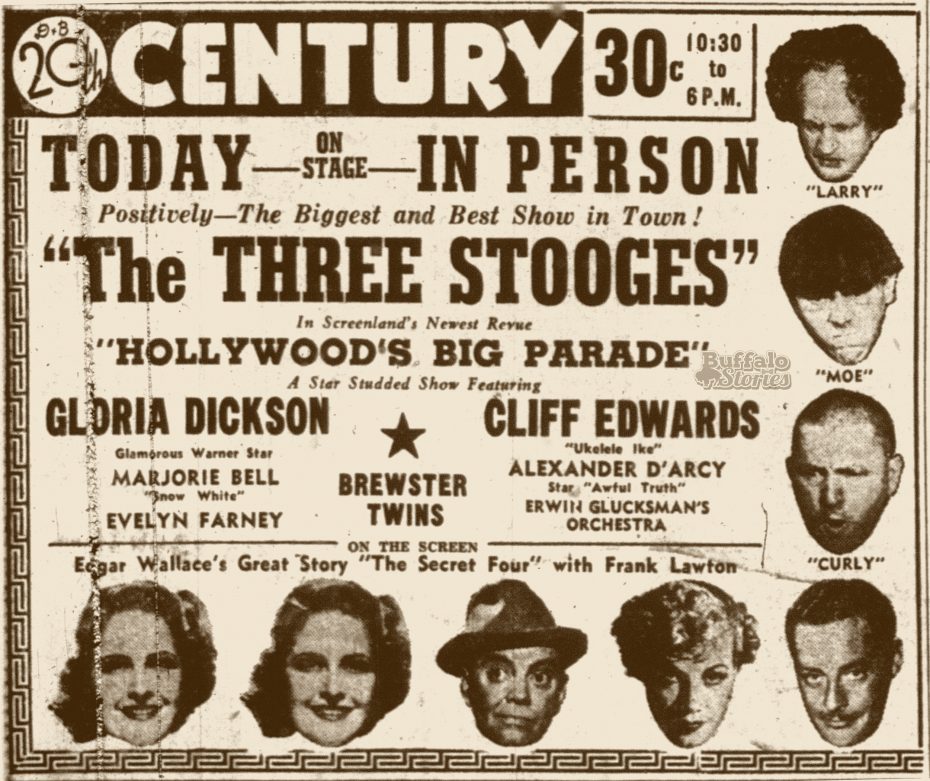 The Three Stooges appeared at the Century Theater on Main Street in 1940.