On the path to this weekend’s NYSPHSAA championships in Albany, some of Western New York’s best wrestlers have been getting frequent maintenance work done on the second floor of a three-car garage at the end of a quarter-mile driveway in Elma.

State tournament qualifiers Johnny Putney of East Aurora, Ryan Stencel from Lancaster, and the three McDougald cousins, Warren and Justin of Niagara Wheatfield and Willie from Niagara Falls, are among the garage band of grapplers who have gathered for Sunday morning workouts led by former Kenmore West coach Kevin Day.

The practice sessions are held in what the wrestlers call “The Barn,” a windowless, 30-by-36-foot space covered wall to wall in blue and red mats.

Day began work on his backyard wrestling room about a decade ago. A sectional finalist for Iroquois in 1987, Day coached at Kenmore West, where he teaches technology, for 19 seasons. He received the Jerry Wright Memorial Coaches Award for excellence from the Niagara Frontier Wrestling Officials Association in 2013, but gave up coaching a year later to devote more time and attention to his sons and their athletic careers.

His oldest son, Connor Day, was a three-time Section VI champion from 2015-17 and now wrestles for Division II Gannon University. Cory Day, a senior at Iroquois, is a two-time sectional champion and the top seed in the Division II bracket at 160 pounds for the state tournament.

Over the years, the Days have opened their barn to wrestlers from around the area.

“We encourage everyone to come out here and get better,” Cory said. “Having this up here is a unique tool that we have to gain an advantage. The want to be a champion, the heart, if you don’t have that, you won’t be here. But all the kids that have that heart want to take that next step.”

The groups range in size from eight to 18, usually representing as many as six different school districts. There is no cost to attend the workouts. But there is plenty to gain, according to Day.

“The main focus is to get kids together that want to separate themselves from their opponent,” he said. “The more reps you can get beyond the regular season, if your opponent is only practicing with his school team, the better chance you have of being successful.

“The kids that want a little extra, they are buying into the fact that if their opponent drilled for seven hours this week and you drilled for 10, it’s going to show up on Saturday at the tournament.” 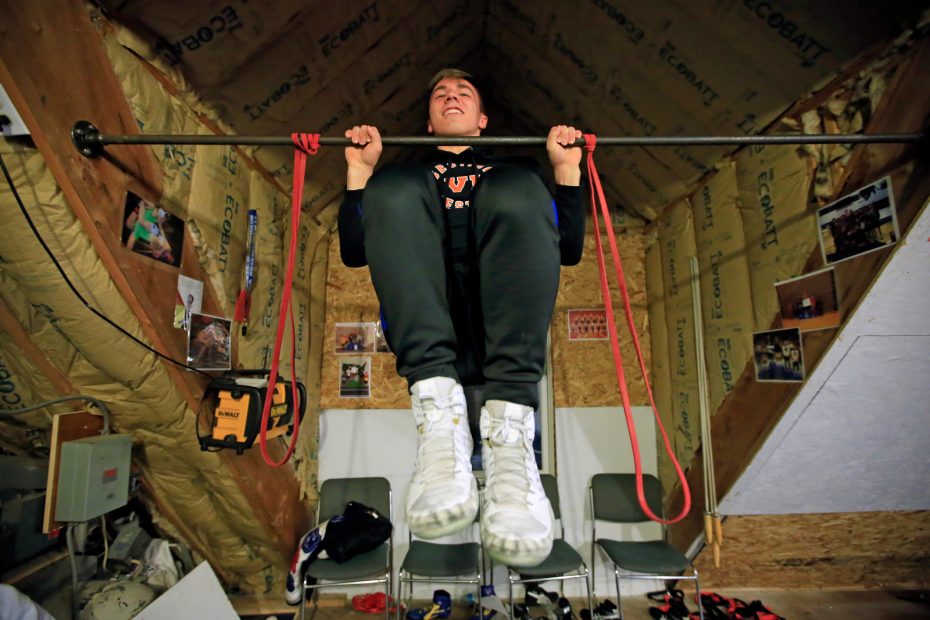 Johnny Putney does pullups above the garage at the home of Kevin Day in Elma. (Harry Scull Jr./Buffalo News)

Putney, a two-time sectional champion and the fourth seed at 152 pounds in Division II for this year’s state tournament, has been training with the Days since he was in eighth grade.

“They were very open to me joining and I felt welcomed there,” said Putney, now a senior at East Aurora. “One of my favorite things about it is that wrestlers of all different skill sets can be there at the same time and can all get something out of it. It’s probably the only place I’ve been to that is like that, which makes it incredibly valuable and useful for everyone.”

“He is an exceptionally intelligent individual and knows so much about wrestling, whether it’s technique or rules or strategies or dealing with different style wrestlers,” Putney said. “He allows people to come to his home and he spends his own time teaching them and never asks for anything in return. … I owe a large portion of my success to him.”

On occasion, barn veterans will pass on their knowledge to younger wrestlers. Watching his son Cory offer instruction, Kevin said, “They’ll listen to him more than they listen to me. That kid’s got 230 wins. They’ve watched him terrorize people.” 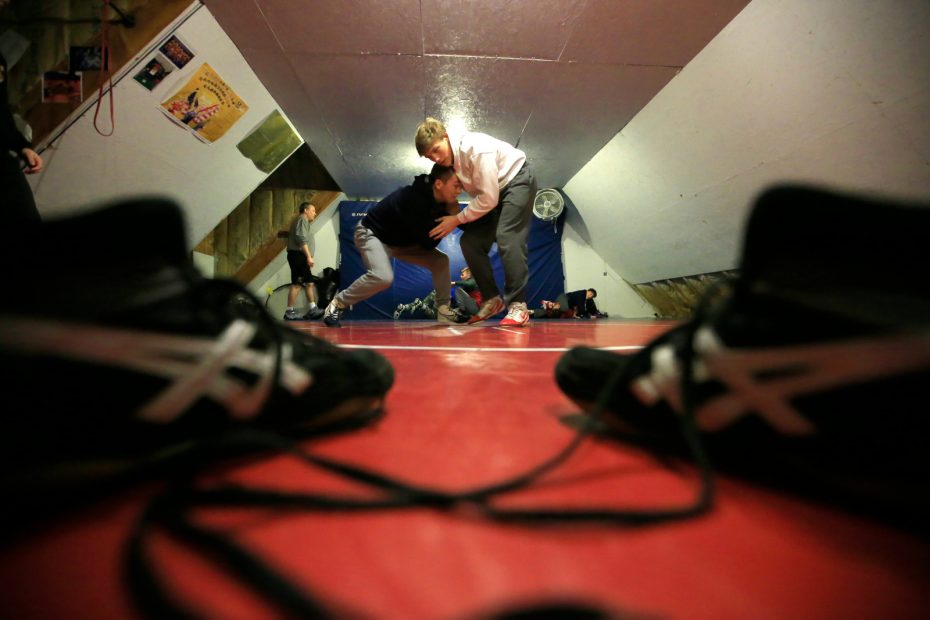 Cory Day, right, from Iroquois High School trains with Ryan Current above the garage at the home of Kevin Day in Elma. (Harry Scull Jr./Buffalo News)

Barn workouts similar to the ones Day organizes have become part of the region’s wrestling culture.

Jeff Prescott, an Olean standout who beat Kevin Day in the sectional final match in 1987 and went on to win two NCAA championships at Penn State, used to train wrestlers out of his basement before moving his school into a gym space in Limestone.

Some wrestlers from Day’s group leave from his barn for a second Sunday workout at the Pike Road Pumphouse just outside Batavia, where a larger group works out with Alexander coach Dee Gugel.

“He is fantastic with the mental aspects of wrestling and positions on the mat. I spend 80 percent of my time with them on their feet,” Kevin said. “They get to hear from a totally different voice, a different tone, a different coaching mentality. If you get it from different angles, it sinks in a little better.

Gugel refers to his group of grapplers as “Paddock West,” a nod to the late Brad Paddock’s barn — which was really a garage — in Warsaw, where wrestlers gathered for years on Sunday mornings.

Reece Mariacher, a two-time sectional champion (2005-06) for Iroquois who wrestled at Brockport State and the University at Buffalo, used to train at Paddock’s barn. Now an assistant coach at Canisius High School, when a recent winter storm closed school for several days, Mariacher called Kevin Day and asked if some of his wrestlers could attend his barn workout.

“It’s very beneficial to the wrestling community in Elma and other athletes from around the area to have a place like this,” Mariacher said. “To have that additional avenue to use something other than the high school practice facility to work on your craft.”