HOUGHTON — The boys 1,000-meter run more than lived up to its billing as one of the most competitive races at the Section VI Indoor Track and Field State Qualifier at Houghton College.

The balanced field headed down the last straightaway of the Kerr-Pegula Field House, and several runners lunged at the finish line. Vinny Pagliaccio of West Seneca East found himself on the ground a few yards past the finish line, completely spent. Then he checked the results on the scoreboard.

“I didn’t know until I looked up that I won,” he said. “You have to trust yourself, trust your training."

The margin of victory was five one-hundredths of a second, prompting Pagliaccio to say, “That’s what you train for.” His time was 2:38.23.

Luckily for Diego Ray of Fredonia, he and Pagliaccio are both off to the state championships in Staten Island on March 2. It’s Pagliaccio’s first trip to the state meet, and he hopes to be at his peak.

“There were some rough spots during the season where I haven’t been able to run outside because of the weather,” he said. “I think I’m pretty much ready, although I’ve got some work to do.” 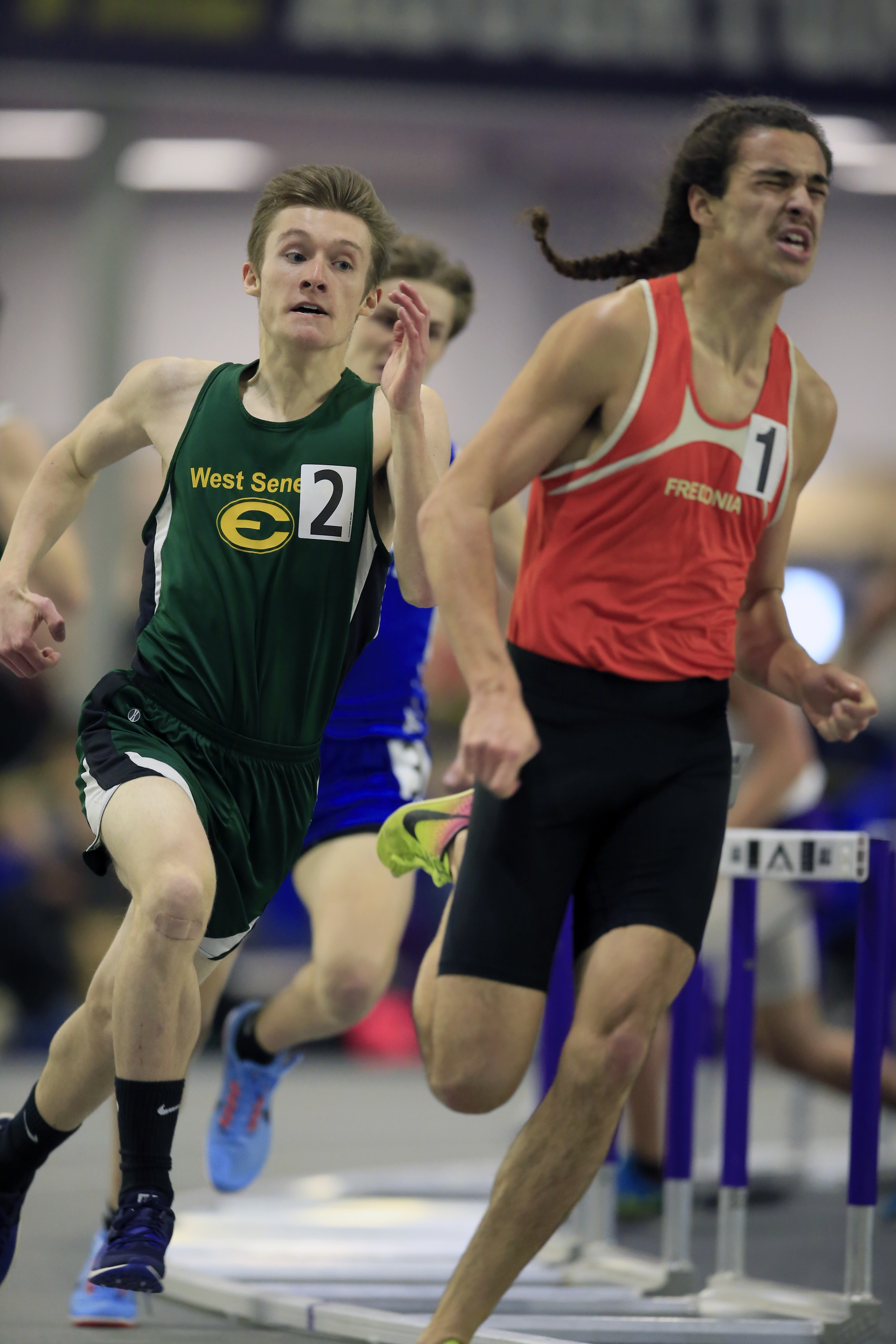 The state championships were on the mind of every competitor at the Section VI meet. Boys pole vaulter Chris Kaszynski of Kenmore West had one bit of drama on his way to securing a spot in Staten Island. He missed on his first attempt at 13 feet.

"I had to think about making sure I made it on the second try,” he said.

Kaszynski cleared the bar, and went on to win the event by clearing 13 feet, 6 inches. That means he’s off to the state meet, too. He thinks he’s peaking at the appropriate time.

“Definitely, there’s a peak for states that you want to hit, and then you want to restart and do it all over again for outdoor. So I’ll crush through and get ready for outdoor.”

If there’s a cooler sport to achieve success, Kaszynski doesn’t know it.

“You get to fly!” he said. “The guys here (who were competing in the pole vault) are all like my brothers. Everybody is supportive. Everyone wants you to clear the next height.”

Brian Gleason of Frontier will race in the state meet after winning the 1,600 meters in 4:29.24. This is Gleason’s first trip to Staten Island. Considering that this is his first year of running indoor track, Gleason is surprised to have the chance to compete against New York’s best.

“After the 5K in cross country, you have to adjust to the shorter distances,” he said. “You really have to figure out what your best distance is. I figured out the mile was best for me.”

Gleason is part of an impressive group, which has been deep and strong throughout the season, at Frontier. He was part of the winning 4x800 relay with Connor O’Brian, Preston Bova, and Joshua Peron, who won the 600 meters by less than a second over Bova.

“We had a great year in cross country, and we’re all killing it in indoor,” he said. “It’s great to see.”

Trailing Gleason in that event was Armani Merlino of Lancaster, who already had a victory in the 3,200 meters (9:46.99) in his pocket. He stayed with the pack for a little while, felt great, and put on a burst. Merlino was never challenged as he won by more than four seconds.

“First you start wondering, am I actually going too slow? Then you figure out it’s time to go,” he said. 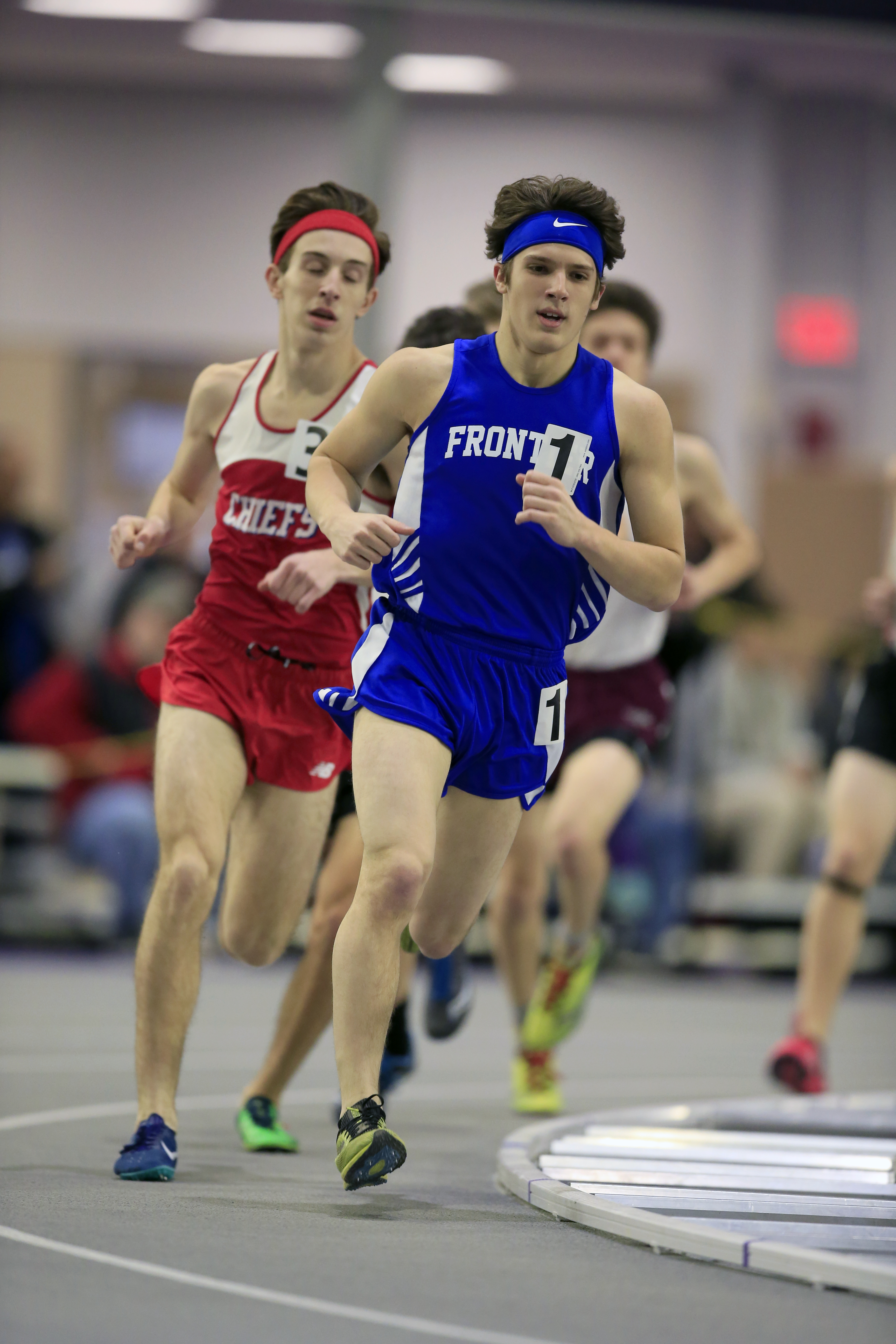 Two veteran coaches who are retiring were saluted at the meet. Kevin Carriero has been working at Lancaster for 47 years, with duties in football, cross country and track and field. Jon Robins of Niagara Falls has spent 32 years coaching football and track and field.