A Wyoming County woman hid children in the attic of her illegal day care when investigators knocked at her door, according to a state agency that licenses day cares.

Three years after a judge ordered her to shut down, Maureen Szwaczkowski continued to pack children into her home, investigators alleged.

A $500-a-day civil fine against Szwaczkowski has now grown to $440,000, the biggest fine ever imposed by the state for operating an unlicensed day care.

“One of the children admitted going to Mo’s house and explained that he had to hide in the attic when inspectors come,” the State Attorney General’s Office stated in court papers.

In another incident, a parent complained to Village of Perry police that a man who identified himself as “George” had called to say he had the mother’s daughter because state inspectors had shown up at Szwaczkowski's home.

“The parent did not know the identity of George,” the court papers stated.

New York’s Office of Children and Family Services, which regulates day care facilities, says it took the “strongest possible action” against Szwaczkowski because it does not “tolerate illegal child care putting children at risk of harm” by failing to obey state laws.

“This extremely large fine was imposed to send a clear message that child safety is paramount and illegal child care operators will be shut down,” said Monica Mahaffey, a spokesperson for the Office of Children and Family Services.

When Szwaczkowski was ordered to appear in court last month, she failed to show up. That brought a response that her neighbors and competing day care operators are still discussing.

State and county officials headed from the Wyoming County Courthouse in Warsaw to nearby Perry. To prove they meant business, county deputies and village police were also summoned.

When they arrived at Szwaczkowski's home at 29 Buckland Ave., they discovered she was still operating a day care, Mahaffey said.

Szwaczkowski was informed that Wyoming County Judge Michael Mohun had issued a bench warrant for her arrest. But if she headed over to court to respond to the lawsuit, she would not be arrested, authorities said.

“Since I have been brought on board, she has completely ceased operations,” said attorney Andrew F. Emborsky, who represents Szwaczkowski. “She has complied.”

Not much goes unnoticed in Perry, a village with about 3,500 residents not far from the massive gorge at Letchworth State Park. For years, other day care operators say they were aware of Szwaczkowski's illegal operation.

“I’m glad she finally got busted. We get cited for every little thing and she just seemed to not care and was always getting away with it,” said Judy Uveino, who for the last decade has run a day care in her Perry home.

Szwaczkowski had been licensed since Feb. 9, 2010, to operate what’s known as a “group family day care,” which allows for seven to 12 children. But during inspections by the Office of Children and Family Services, it was determined that she was not maintaining adequate staffing levels.

“In essence the defendant had repeatedly failed to provide competent supervision of children,” the court papers against Szwaczkowski stated.

As a result, her license was revoked in November 2014. 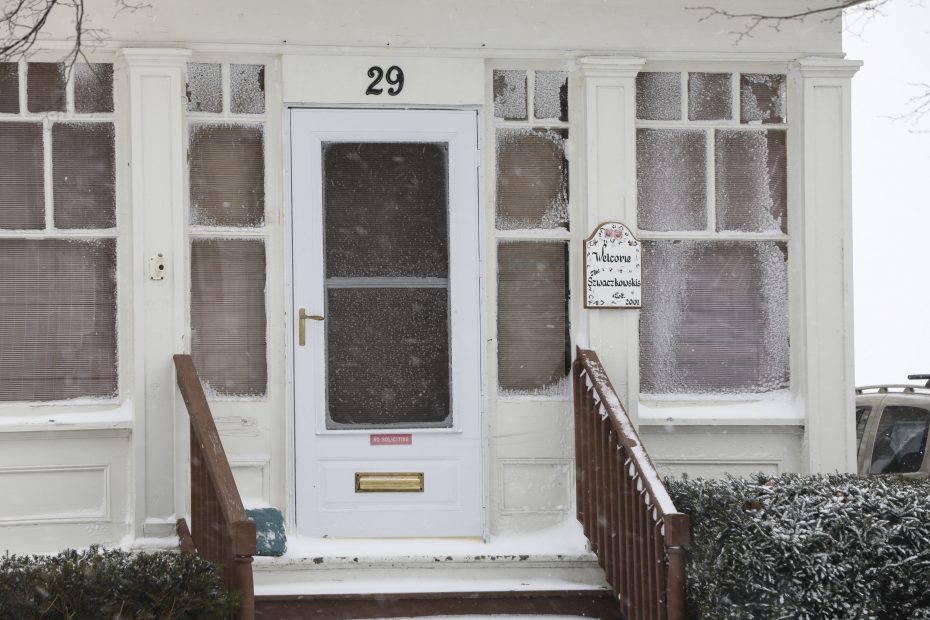 On March 11, 2015, a parent called Perry police to report that her daughter was with an unknown man named “George,” when the child was supposed to be at Szwaczkowski's day care.

When police investigated, Szwaczkowski said the state had closed her down the previous week, but she had taken some steps to continue.

“The defendant further stated that she attempted to harbor the children at another house, but state inspectors had located them,” the court papers state.

Despite the state’s scrutiny, Szwaczkowski stayed in business. The next day, the state received another complaint that Szwaczkowski was still running her day care.

A follow-up inspection discovered that she was caring for seven children ranging in age from three months to five years of age at her home. An inspector cited Szwaczkowski for running an illegal day care.

On March 27, 2015, one of the children at her day care told authorities he would have to hide in Szwaczkowski's attic when inspectors showed up at her home, according to the complaint. The state believes this was part of her strategy to hide her illegal operation.

On April 16, 2015, during a state surveillance operation, the state determined Szwaczkowski was caring for at least nine children. When inspectors knocked on her door, she refused to answer, they said.

The state began fining Szwaczkowski $500 a day on May 28, 2015. She appealed the fine, but a judge upheld the state’s financial penalty and its other actions taken against her.

Uveino, who operates Judy’s Day Care, said she and other day care operators would ask inspectors what was going on with Szwaczkowski.

“We were told it was being taken care of. We had been complaining for at least four or five years,” Uveino said. “The rules are the rules. You have to follow the rules or you pay the consequences.”

The state has numerous laws and regulations governing operations at day cares that range from certifications in first aid and CPR to allowing inspections and criminal background checks of operators and adults who may live in the home.

On average, the state issues about two dozen letters annually ordering individuals to stop operating illegal day cares. Some of those individuals, Mahaffey said, end up going through the state process and obtaining licenses.

Day care licenses, she said, must be renewed every four years.

The state's enforcement actions taken against Szwaczkowski have the support of other day care providers in Perry.

“It definitely hurt my business because she had so many kids,” said Abbie Dueppengiesser, who operates a day care in her Perry farmhouse. “The state has to be strict. They are protecting children. We live in a very, very bad world.”

Candace Sadowski, another Perry day care operator, said Szwaczkowski was undercutting the competition by charging as little as $2 an hour.

“This is what we do for a living and the rest of us were being undermined,” Sadowski said, adding that state inspectors over the years had quizzed her and other day care providers about Szwaczkowski.

The Buffalo News attempted to reach out to parents who placed their children with Szwaczkowski, but received no responses. On Facebook, though, Szwaczkowski had some supporters:

One woman wrote, “I loved her!! She watched my kids before and she was great.”

Another posted:  “… she was the most amazing daycare provider.”

Szwaczkowski's lawyer declined to say whether Szwaczkowski will fight the attorney general's lawsuit, but he said she has been publicly humiliated and undeserving of what the state has done.

“My client is very embarrassed by the amount of attention that this matter has drawn,” Emborsky said. “I expect that the ultimate resolution of this case will speak for itself. We’re really not going to have any further comment on the matter until it is concluded.”

Szwaczkowski is scheduled to appear in front of Judge Mohun on March 7 for further proceedings.

When she was reached by phone at a hotel in Florida, Szwaczkowski said, “I’m on vacation. Thanks for bothering me.”

She then hung up the phone.

Complaint Against Maureen S... by on Scribd