Except when there have been awards shows, Sunday nights haven’t exactly been must-see TV lately.

But circle March 3, when three interesting TV projects that should keep your DVRs humming.

The National Geographic Channel carries a two-hour documentary at 9 p.m. on that night that has played in theaters, “Free Solo.” It revolves around Alex Honnold’s incredible rock climb of El Capitan in Yosemite National Park, and it also has a romantic element.

Since I am so afraid of heights that I can’t stand on a chair, I felt queasy watching some incredible excerpts of the film here. I feared for Honnold’s life even though Honnold was very much alive in front of us during an interview session.

Honnold, who has lived in a van, spent the night in a luxury hotel here and was asked which he prefers. He said the luxury hotel was “not as good as the van.”

“One of the things that drives me crazy in nice hotels is there’s too much room, there’s too much space,” said Honnold. “You have to, like, wander. It’s like a 10-meter walk to get to the bathroom. And you’re like, where are the light switches?”

“And, like, the beauty of the van is that you can just reach down, grab your pee bottle, go back to sleep.”

On the same night at 8 p.m., HBO is carrying the first two hours of a controversial two-part, four-hour documentary, “Leaving Neverland,” about allegations that Michael Jackson sexually abused two young boys. Now in their 30s, they tell their stories. The second part of the documentary, which recently premiered at the Sundance Film Festival, airs March 4.

The disturbing film includes interviews with the mothers of a California man and an Australian man who attempt to explain why they allowed their very young sons to have sleepovers with Jackson, who they came to consider a member of the family.

March 3 also is the date of the premiere of the next edition of ABC’s “American Idol.” The two-hour premiere starts at 8 p.m.

Needless to say, the two cable projects may drive many viewers away from the “Idol” premiere.

Warner Brothers treated critics here to a run through of an episode of “The Big Bang Theory” that will air sometime in March. Buffalo native Christine Baranski, who has a recurring role as Leonard’s mother, is in the episode.

We were allowed on the set, which enabled me to have a picture taken on the “Big Bang”couch. Looking around the set, I was surprised to see a bag of Tim Horton’s coffee. 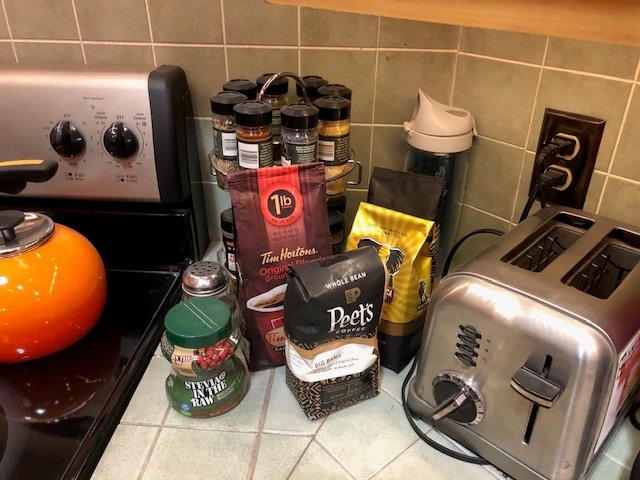 The kitchen set from "The Big Bang Theory" shows that someone on the show has an affinity for Tim Hortons coffee. (Alan Pergament/Buffalo News)

HBO disappointed critics here by deciding against having an interview session to showcase the final season of “Game of Thrones,” which starts April 14.

Its reasoning was suspect, to say the least.

Quentin Schaffer, the vice president of HBO Corporate Communications, joked about the answer to why a panel wasn’t scheduled.

Of course, critics knew they weren’t going to get answers to those questions and they wouldn’t want to reveal them if they had gotten them.

A “Game of Thrones” panel – like panels with all shows -- would have been able to address many things beyond spoilers, including where the series belongs in HBO’s history and what is the overall theme of the final season.