Stand on Youngs Road and look across to SUNY Erie Community College's Amherst campus and you'll see its two faces.

To your right is a dense complex of academic buildings, including the college's bright new science building. To your left, though, is a vast, nearly empty expanse of grass and underused athletic fields.

College officials want to put that space to better use.

ECC President Daniel Hocoy said the college, as part of a study of its three campuses, is considering redeveloping a nearly 49-acre section of the North Campus at Main Street and Youngs Road.

Hocoy said officials are talking about the construction of apartments, student housing, a hotel, retail shops, restaurants, a brewery and an innovation hub, among other ideas.

"That would be like a little village that would serve the needs of Amherst, Williamsville and also the college," he said.

Any development would tie into the college's mission – with, for example, culinary arts students working at a restaurant. 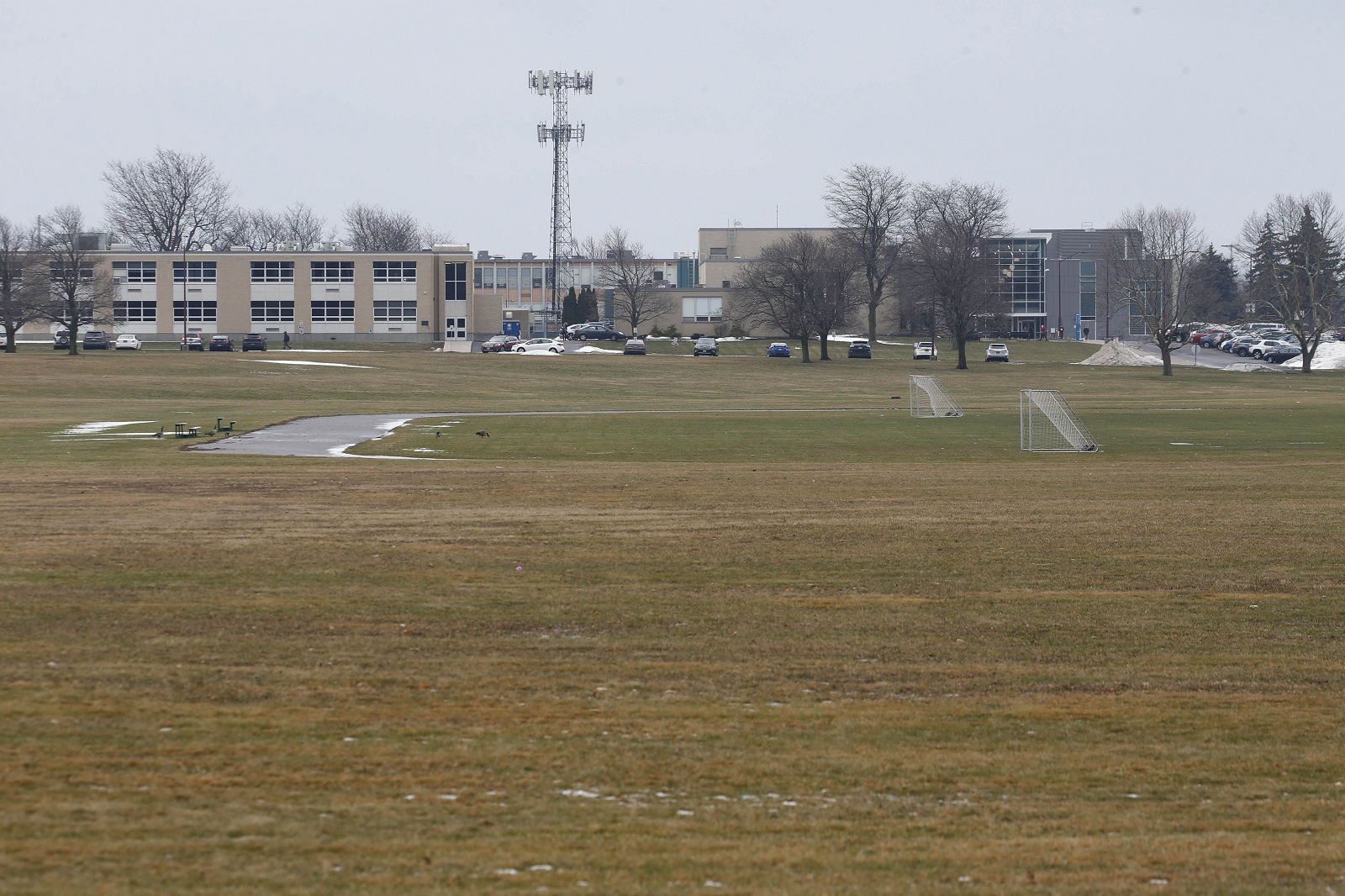 The playing fields on the ECC North Campus at the corner of Main and Youngs in Amherst. (Derek Gee/Buffalo News)

Planning is in the early stages, and questions about what development makes the most sense and how the college would pay for all of it remain unanswered. But ECC has discussed initial plans with community leaders, who say more details are needed but that they welcome further investment on the Amherst campus and in that section of the town.

"I think there's opportunity for public-private partnerships," said A.J. Baynes, president and CEO of the Amherst Chamber of Commerce. "That's obviously a valuable piece of real estate. And there's a lot of commercial traffic that goes by, would you say, the front lawn of SUNY Erie there?"

The then-Erie County Technical Institute moved to the present site of the North Campus in 1960, according to a history of the college. The school later added its City Campus, located downtown, and its South Campus in Orchard Park.

Most of the low-slung, pale brick buildings on the North Campus were constructed in the 1950s and 1960s. The $30 million building for science and engineering students is the major exception.

"Today's use and needs of SUNY Erie, and going forward, is quite different than it was back then," said Dennis Murphy, an ECC trustee and former board chairman who founded INNVest Lodging Services.

The STEM building opened a year ago following a decade-long fight over whether the college should invest in the aging North Campus or consolidate its suburban campuses into the Buffalo campus.

The college isn't interested in revisiting that battle, but it has hired a consultant – JMZ Architects and Planners of Glens Falls – to examine its space needs at all three campuses.

Even as that process is underway, Hocoy and Murphy see opportunity on the North Campus.

The college's 116.5-acre Amherst campus is bounded by Main Street to the north, Wehrle Drive to the south, Youngs Road to the west and Tech Drive to the east. It is split in half by an internal road named Arrow Drive that runs between Youngs and Tech.

Nearly all of the campus' buildings are between Arrow and Wehrle. The north half of the campus is largely filled with baseball and softball diamonds, soccer fields, other athletic fields and green space. The fields largely go unused during the winter months, naturally, and the college's sports teams for the most part practice and play games at the South Campus, Hocoy said.

The question Hocoy and the college are asking is whether there's a better way to use of that space. It's early in the planning process, but school officials see potential for restaurants and a brewery, a hotel, retail stores, housing for students and others and an incubator for start-up businesses, among other concepts.

The businesses all would tie into the college's instructional mission. In addition to its culinary arts program, ECC has a hospitality program and a brewing science and service program.

Hocoy said the college could launch a degree program in winery operations, for example, and "we could have a wine bar."

And business students could get a chance to set up shop in an incubator, or maker space, where they would get help in bringing their ideas to life.

The hope is to build a walkable neighborhood of three- or four-story commercial, academic and residential buildings within the larger campus, Hocoy said. It could help attract more out-of-town and international students and better connect to the off-campus community, he said.

"We want Amherst to be a city of the 22nd century and beyond," said Hocoy, who took over as ECC president in 2017.

Leasing out land on the North Campus for this development could help the school offset, at least in part, the anticipated loss of tuition money as the region's high school population continues to decline in the coming years, college officials said. That's a problem community colleges across the state are grappling with.

"This is a perfect example of why we brought Dan in," Murphy said. "He looks at things in a way traditionalists have not."

The college must figure out how to pay for all of it and must obtain buy-in from Erie County, the State University of New York and the Town of Amherst. Further design work and planning is needed and any construction is a long way away. The consultant's study should be finished in a year.

But college administrators already have started briefing town leaders on the proposal.

That intersection at Main and Youngs has the green space of the North Campus, a former gas station soon to be replaced by a car wash, vacant land owned by Uniland Development Co. and a NOCO gas station. ECC previously has talked about a mixed-use development partnership with Uniland for that vacant parcel or the North Campus itself.

Amherst Supervisor Brian J. Kulpa noted the available land, the existing infrastructure and proximity to the airport and Williamsville as selling points.

"I think that it bodes well for some future redevelopment of that campus, which is a little tired," Kulpa said.