Diseased ash trees snap like twigs in the face of gusting winds. The falling trees can damage property, block roads, tear down power lines and shatter a homeowner's peace of mind.

With high wind warnings appearing regularly in the weather forecasts, residents throughout Western New York are reeling after the fall of a towering tree. Many described the experience as unforgettable, costly and always jarring.

“The biggest danger is dead ash trees. They’re punky, soft, lose their strength, and people wait too long to remove them. Taking them down becomes dangerous,” said Greg Sojka of Greg’s Tree Service in Lancaster. “The top snaps, branches break off and when it falls, it shatters like china.

“There’s a huge liability and a hazardous situation with dead ash trees," said Sojka. "The next wind storm, there will be another 40 or 50 down. They fall any which way the wind is blowing.”

New York State was home to an estimated 700 million ash trees in July 2018, according to the state Department of Environmental Conservation. Erie County had an estimated 24.4 million ash trees, roughly 20 percent of the county’s total tree population, the DEC reported. But the ash population is decreasing rapidly, thanks to a tiny green bug.

The hungry emerald ash borer emerged in Erie County in 2011 to infest ash trees and rob them of the ability to circulate water and nutrients. By 2014 the infestation soared, leaving thousands of dead trees that stand out like “long brown fingers” from the surrounding vegetation. Most die within two to four years and become ticking time bombs, said Sojka.

Stacey Doerflein, 43, of George Street in Depew, thought a plane struck her ranch-style home one recent morning as her 17-year-old daughter Breanna was getting ready for school. Living off of Transit Road near the airport, the Doerfleins are accustomed to the sound of low-flying planes. But then they discovered their neighbor’s 80-foot ash tree had snapped and smashed the roof. 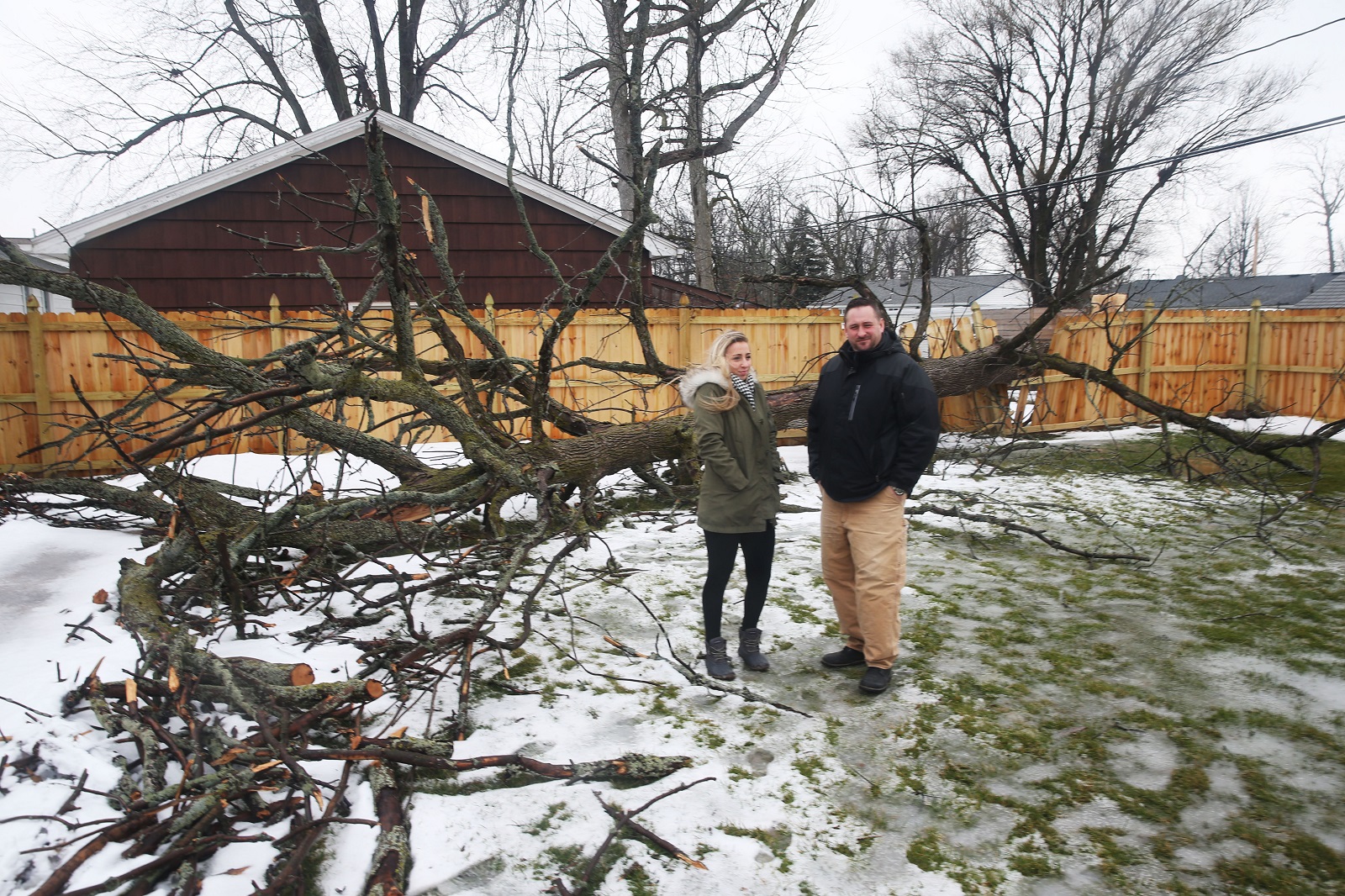 Jeffrey Doerflein, right, and his daughter Breanna in the backyard of their home in Depew. A neighbor's dead ash tree came down in high winds and landed in their yard. (John Hickey/Buffalo News)

It was 7:26 a.m. on Feb. 8 when 60 mph winds toppled one of three dead ash trees in the neighbor’s yard, said Jeff Doerflein, who was at work in Lancaster at the time. Just six years ago, Doerflein removed three diseased ash trees from his yard and suggested his neighbor do the same. This past summer, after saving for years, the family added a custom-built, stamped concrete patio and new windows to their backyard.

“Numerous times I asked my neighbor if he was going to take the tree down. I had 6-foot branches in my yard. I had children, and it was a safety concern. I had photo documentation. I printed literature that the trees are hard to maintain and deadly,” said Doerflein. "Then I went to the Village of Depew. I wanted to have something done about the trees.”

Depew Code Enforcement Officer Anthony Fischione is familiar with the Doerfleins. In September 2018, the village sent a letter to the neighbor based on Doerflein’s complaint. The letter was not a citation, Fischione said. It informed the neighbor of Doerflein's complaint, and the hazard posed by the dead trees in his yard.

“The issue is trying to cite someone for a dead tree,” said Fischione. “I’d love to be able to write people up, but there’s nothing to back it up. The only vegetation that gets addressed is grass or noxious weeds. Trees and shrubs are exempt. The thing is, we just can’t make it up. Here in Depew we have nothing. I’ve tried calling it an imminent danger. I have yet to find anything that gives me jurisdiction to cite someone.”

James Abbatoy, 60, is surrounded by ash trees at his Angola home. He said he can hear them knocking in the winds coming off Lake Erie. Abbatoy worried his dead ashes will fall on his house or take down power lines and cut electricity to the neighborhood. He is looking to have them removed. 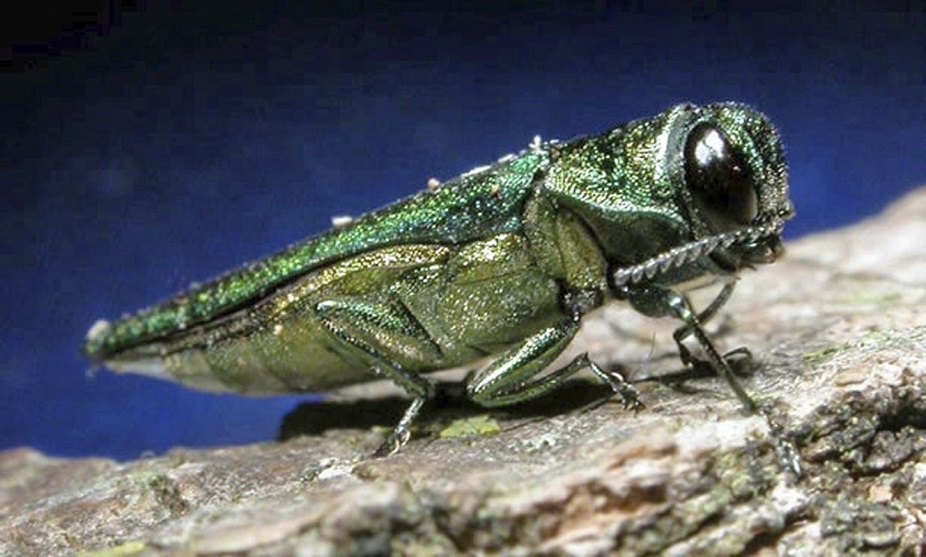 “They were looking to protect [power] lines if one of my trees should fall,” Abbatoy said. “They offered to cut them back, possibly remove them, but they wanted to leave the mess, and I would need to sign a liability waiver. At first I said no, but now I’m thinking about it.”

“We’ve taken down 8,500 to 9,000 ash trees in Western New York, and we’ll probably remove our 9,000th ash tree in the next month,” said Bertola. “Sometimes we’ll trim an ash tree and not remove it entirely if that is all that’s required to make our facilities safe. We’ve been having branches coated with ice fall and damage lines. Ice and wind are worse than snow.”

As of Friday, two trails — Hawthorne Hallow and Ridge Run — are closed because of the fallen ash trees, said Jaroszewski. Ash trees also damaged the boardwalk, the elevated footpath covering a portion of the trail. Workers are waiting for a break in the weather to rebuild the trail and repair the boardwalk. So far, 200 ash trees in the park were removed because they were diseased and in danger of falling, said Jaroszewski.

“We take them down every day,” said the park director. “Every time the wind is above 20 to 30 mph, we walk the trails to look for downed trees. Every time a tree comes down, there’s a 99 percent chance it’s an ash."