In an unusual request, Uniland Development Co. is asking the Buffalo Zoning Board of Appeals to grant an exception to the rules — not for some aspect of a project it wants to do, but simply for what it is.

The Amherst-based developer is planning to build a new U.S. post office at 695 Washington St. in downtown Buffalo, to replace the outdated Ellicott post office up the street that Uniland is buying. That's a condition of Uniland's purchase agreement with the federal government, which required it to provide a new mail facility within the same ZIP code.

The problem for Uniland: The city does not legally allow it to do so. The city code specifies that civic buildings "may be erected only by a government agency or nonprofit establishment" — not a private developer, even if the developer has a contract to do so with the federal government.

So Uniland is seeking an "administrative appeal" to allow it to continue, noting that its participation means the city also has oversight of the project, which must then comply with the Green Code.

Uniland plans to build a 2,685-square-foot building on 0.1 acres on the northwest corner of the current post office property, which will be combined with 502 Ellicott. The Postal Service will sign a 10-year lease, with two five-year renewal options, for up to 20 years in total.

The proposed new building would meet the Green Code requirements for "a civic structure in all matters of form" and would not require any variances, according to a letter to ZBA Chairman James Lewis from Gwen A. Howard, vice president of the architecture group at Foit-Albert Associates, who is working with Uniland.

It would provide the post office box rentals that are needed, as well as offer the retail "walk-up" services. The plan even supports the city goal of reducing parking lots by sharing a large parking area that Uniland already owns for its building at 502 Ellicott, Howard noted.

The developer is even required to build in accordance with the U.S. Postal Service design standards, which "dictate every single feature of these buildings, all general layouts, configurations and relationships," Howard said.

"If the United States Postal Service was to construct this building themselves, they would not require the issuance of a City of Buffalo building permit or any compliance with municipal codes at all," Howard wrote. "Granting of this appeal will allow the project to continue its path to the Planning Board for Major Site Plan review."

The board will consider the request Wednesday afternoon.

The Ellicott Post Office has served downtown Buffalo with mailboxes, retail services and mail delivery from its location at 701 Washington St. since 1977, but the federal agency decided the building has outlived its usefulness. Uniland bought the nearly 2-acre site in November for $3.05 million, with plans to redevelop the block-wide property, adding to a growing campus in that neighborhood that already includes 505, 520 and 525 Ellicott.

Located on the northern end of the central business district, just south of the Buffalo Niagara Medical Campus, the property includes the 9,870-square-foot building, as well as a front drive and parking area and another parking zone in the rear.

It's adjacent to Uniland's new three-story brick-and-glass office building at 520 Ellicott, which cost $5 million to build, and houses a DaVita Healthcare kidney dialysis center and offices for Huron Consulting Group within its 23,000 square feet of space. And it's across from Uniland's properties at 525 and 505 Ellicott, which have not yet been developed. 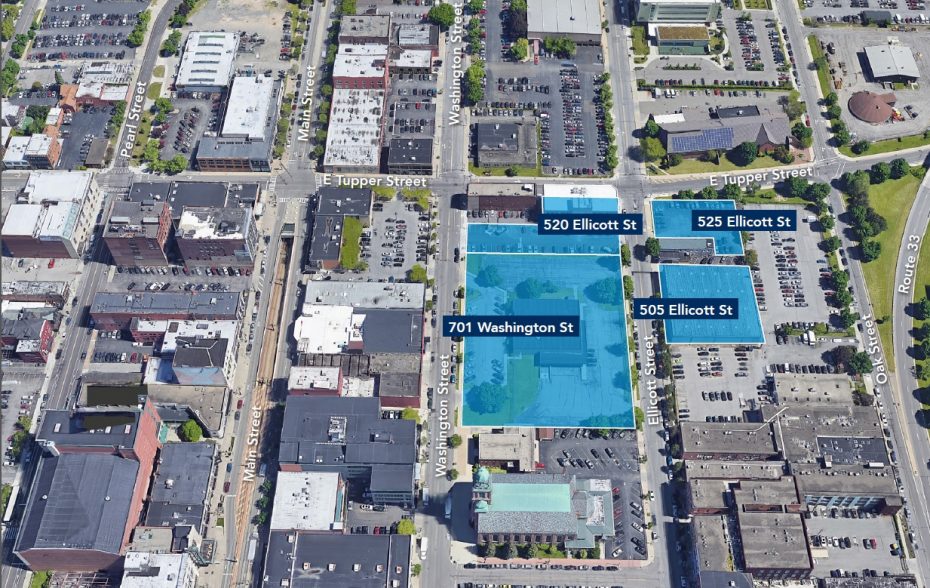