The routine, in many ways, remains the same. Clarence Simmons is up early on these winter mornings. He glances out the window of his Wyoming Avenue home in Buffalo, and almost always sees snow or ice along the street.

He puts on at least two layers of clothing beneath his uniform and yellow slicker, laces up the boots that he says make all the difference, and heads off to his job as a crossing guard for the City of Buffalo.

For about four hours each day, over two shifts, he watches over the corner of Suffolk Street and Westminster Avenue, not far from the door of the Westminster Community Charter School. He has worked there for 15 of his 18 years as a guard.

Two elements make it extraordinary, and the one that means the most to him is missing.

The first is longevity. Clarence is 80, even if he looks 60. He spent almost 40 years at Moog in Elma, but then decided, “When you retire, you should not just sit down.” Eighteen years ago, he was one of the first men ever hired to serve as a regular crossing guard in Buffalo, said retired police Lt. Robert Penders, who supervised 191 crossing guards at the time.

Until that point, the jobs were almost always held by women, according to Debbie Reilly, also retired, who helped coordinate the guards and calls Clarence "a great man." She said he was also the first African-American man to work as a city crossing guard, but Clarence found plenty of inspiration inside his own house.

His wife, Zollie, a city crossing guard since 1977, typically works at Suffolk and Kensington Avenue, one short block from Clarence's corner. 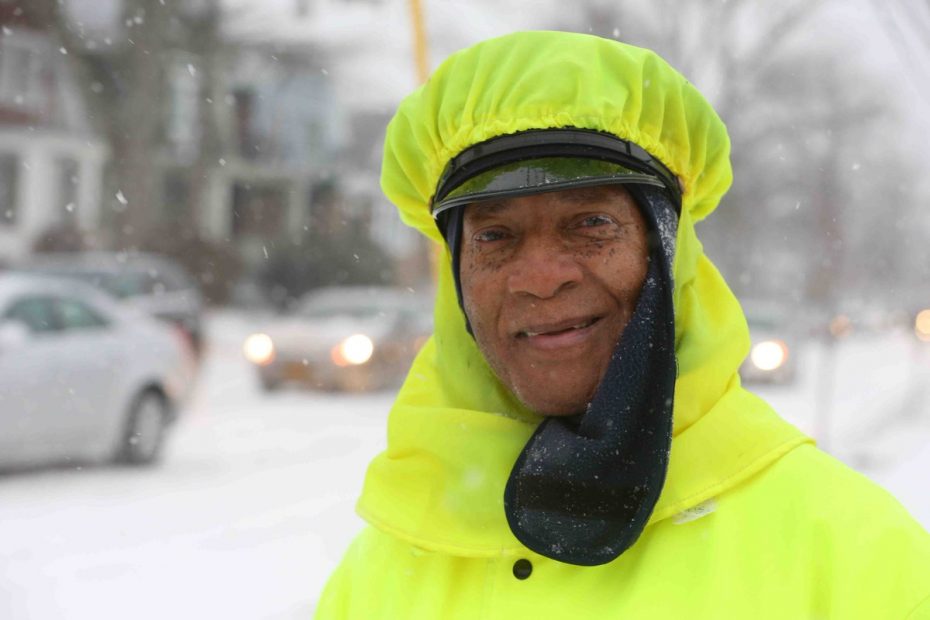 Clarence Simmons at Suffolk and Westminster, the corner he's served for years as a crossing guard. (John Hickey/The Buffalo News)

They have known each other since they were children in a coal mining camp at Omar, W.Va. The camp was segregated, at a time when the families of African-American workers had no choice but to stay within that same community.

Clarence recalls how he and his buddies were always throwing stones – at trees, at bottles, into the water, at anything they saw. Maybe, Clarence said, he twirled a stone or two at this third-grade girl he saw walking home from school, a girl whose attention he sought above all else.

More than 70 years later, they have their own punch lines for the tale.

“One conked me upside the head,” Zollie said, before going on to say the foggy thinking she suffered as a result may be why she agreed to marry Clarence.

Her husband finishes the story in a slightly different way.

“I was walking by the house, and she came to the door and said, I’m going to get you for that,” he said. “And she did. She married me.”

While they laugh, the truth of it is this:

Until this year, they did all things together, even work.

That routine has changed over the past few months. Zollie’s back was hurting her, and she needed spinal surgery. Since autumn, she has been laid up and off the job, which she misses terribly. She and Clarence are faithful members of Pastor Michael Chapman's St. John Baptist Church, and Zollie said she keeps praying she can return to work before the school year ends.

For now, then, it is just Clarence who stands on a corner every morning, breathing mist, mask beneath his cap to add a little bit more warmth. Stand with him, and you realize he is always watching.

Over there, a child is jumping from her father’s car.

Over there, a mother and a kindergartner, heads down, both looking weary, are headed toward the corner, unaware of vehicles skidding past.

Clarence tries to read every face before wading into traffic. Too many times, he said, even in a school zone, people are on their phones or arguing with someone in the car or twisting back to try and quiet a toddler in the back seat.

So Clarence waits, holding back any children at his side until he can catch a driver's eye and raise that gloved hand. Please stop.

Only then does he walk to the middle of the street, sliding and pushing through the frosting-like slop, little kids following closely behind, one hand twirling – a gesture he remembers from his days in the Army – for the child to come on, keep moving, until they are across, traffic resumes, and it all seems like no big deal.

Clarence is already looking again at traffic, trying to catch an eye. 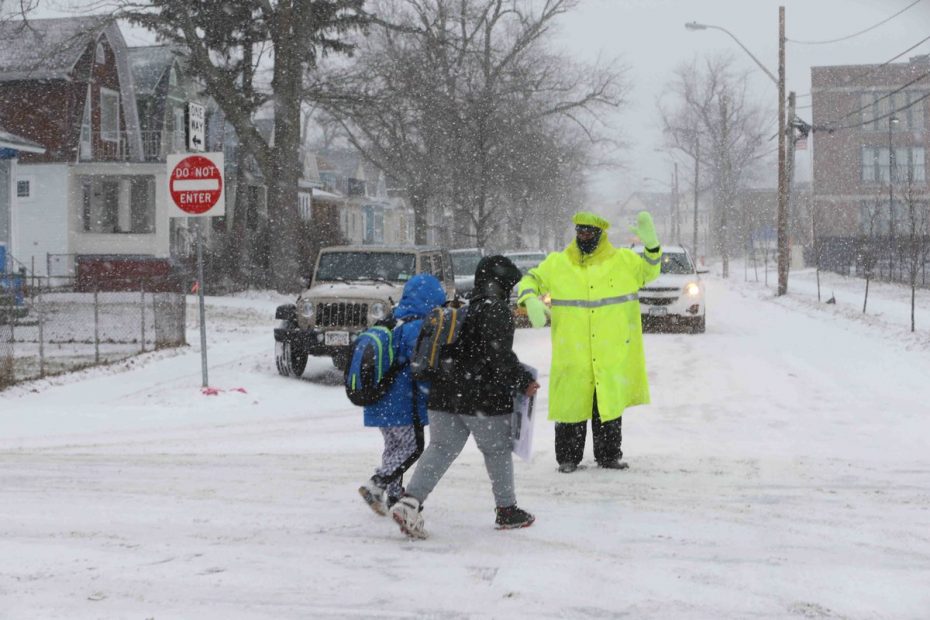 Even now, he and Zollie are driven by lessons from their childhoods. Zollie’s father died in a mining accident, before her earliest memory. She lost her mother when she was 5, and she was raised by older sisters who put the little girl above their own worries and concerns, an example that shaped the course of her life.

As for Clarence, his father was a World War I veteran who worked in the mines. He made it to retirement at 65, before dying a few years later of the brutal disease known as the black lung.

Clarence remembers how he and his siblings would sometimes meet their father on the coal car that brought the workers up from beneath the earth, how their dad would be soaked and trembling with cold after working in stagnant water that sometimes built up in the tunnels in the mines, how their father told them from an early age:

“Fellas, you better get an education so you can stay out of these mines.”

Clarence listened. After high school, he said, there were three choices. You went into the military, you went to college, or you did the same work as your father.

He joined the Army and spent eight years in uniform. He and Zollie were married, then made a decision after Clarence left the service. They could stay in their hometown in West Virginia, but the economic pressure, the temptation, would always be to go into the mines.

The other choice was joining some cousins in Buffalo, where they heard there were plenty of jobs.

They made the move. Clarence went on to spend 37 years on the floor at Moog, while Zollie – after working as a nurse's aide – taught Sunday school at their church and took the job as a guard. They raised two sons, Christopher and Clarence Jr., who built successful careers of their own.

After retirement, Clarence volunteered with Meals on Wheels, and they both remained active in their church, while twice each day on weekdays they followed the same routine.

They went to their jobs, one short block apart, to help boys and girls find their way across the street. Sometimes the children barely seemed to see them, but sometimes they looked up with a smile, a sunburst of trust or gratitude.

And every now and then, at moments Zollie does not forget, these young people returned as teens or young adults she barely recognized to wrap her in a hug and say:

Remember? When I was little? You used to cross me?

At those moments, every step of their long journey makes sense.

“I’ve been blessed with my corners,” Zollie said, amid her prayers to go back.