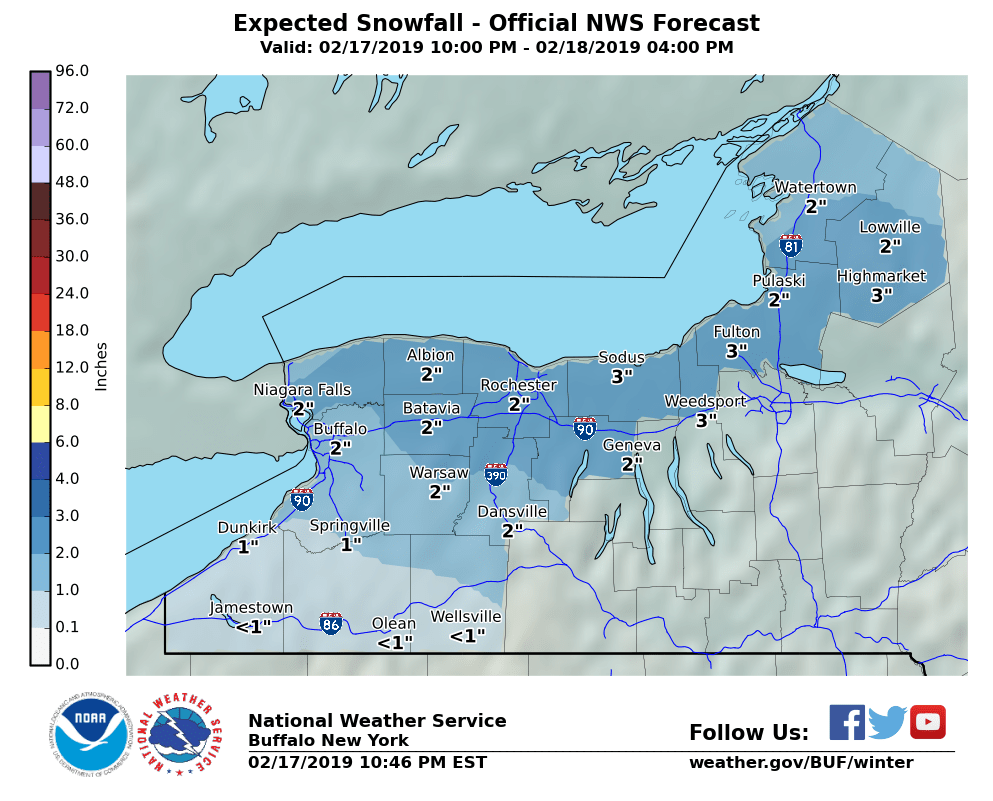 A couple of inches of snow is forecast in Buffalo by Monday afternoon. (NWS Buffalo)

Some residual snowfall from a storm system that brought some snow and freezing drizzle across the Buffalo Niagara region late Sunday is expected to wrap up by midday Monday.

A winter weather advisory was posted through 1 p.m., the National Weather Service said.

Snow showers, possibly mixed with freezing drizzle, were expected in metro Buffalo. About 1 inch of accumulation was forecast on Monday.

It's the 12th time since 2000 Buffalo has hit the century mark for snowfall. The city's average seasonal snowfall is 94.4 inches.

Today's daytime highs were expected to top out in the mid-20s.

High pressure was expected to take over on Tuesday. Mostly sunny skies with highs in the mid-20s were forecast. Overnight lows Tuesday were expected in the mid-teens.

The next weather-making storm is expected to arrive in Western New York by Wednesday.

A storm system pushing into the Great Lakes from the Plains states is forecast to bring snow to the Buffalo Niagara region by late Wednesday morning. Forecasters said it should overspread the balance of Western New York through early evening.

"Precipitation type is going to become the main concern starting Wednesday afternoon and heading into Wednesday night as warmer air aloft arrives," the weather service said. "There looks to be a several hour period where sleet or freezing rain may become the predominant precipitation as a transition to rain occurs, particularly west of the Finger Lakes."

Forecasters said neither snow nor ice accumulations don't look significant, but travel could be impacted.

"Snow is expected to transition to rain Wednesday afternoon into early Wednesday night," the weather service said in its hazardous weather outlook. "As this transition occurs, a period of sleet and freezing rain is possible. Some light accumulations of ice will be possible."