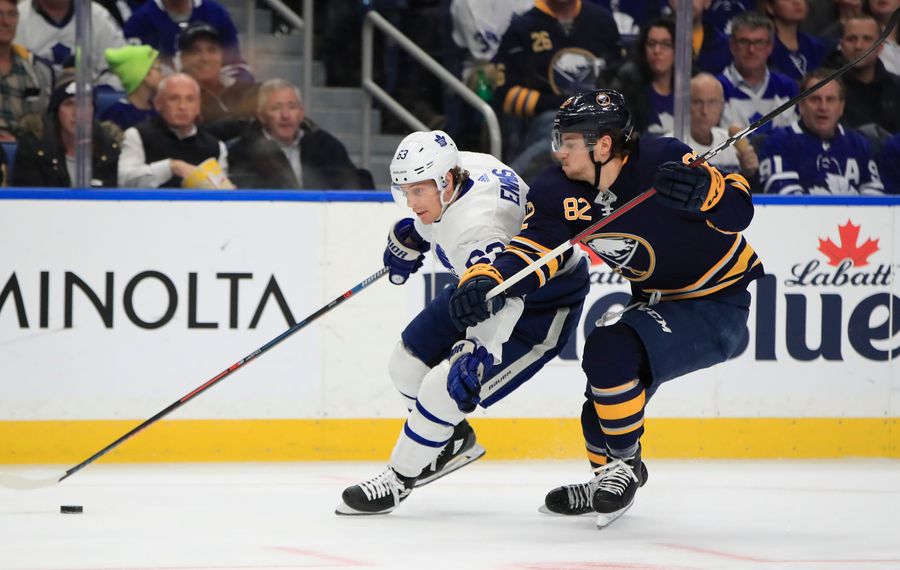 SUNRISE, Fla. – Nathan Beaulieu is well aware the countdown clock has, in fact, slipped under a week to go. By the time the NHL trade deadline hits next Monday afternoon, the Buffalo Sabres' defenseman is a good bet to have a new team.

Beaulieu is waiting for his phone to ring to get the go-ahead to play again. Until then, he practices with the Sabres knowing there's little chance he gets into another game unless the team is hit by a sudden epidemic of injuries on defense.

"I'm not going lie. I'm pretty frustrated. I don't really know what to tell you," Beaulieu said after yet another workout Monday in BB&T Center. "It's important for me to keep grinding away here. Time is ticking. There's not many games left and you want to get in as many as you can. But it's tough. You try to stay in shape and practice hard. It's tough but part of being a pro. I have to make the most of the situation I'm in."

The reeling Sabres look to snap an ugly two-game skid Tuesday night against the Florida Panthers. Beaulieu figures to be a spectator for the 22nd time in the last 26 games and the ninth game in a row.

Beaulieu had a rough night during the Sabres' 7-2 loss Jan. 14 in Edmonton – but who didn't? – and that was compounded by news emerging out of Quebec later that week that his agent had requested a trade to get him more playing time.

Since then, Beaulieu's career has become a bit of a political football. He hasn't played well enough at times to satisfy coach Phil Housley, and the trade rumblings clearly agitated General Manager Jason Botterill enough to the point he's been left to rot in the press box.

Beaulieu, in the final year of a deal that carries a $2.4 million cap hit, has three goals and four assists with an even rating in 27 games. He has just one goal eight assists and was minus-19 last year in 59 games.

Housley has said multiple times he's happy with the way Beaulieu has prepared for practice, but that hasn't tipped the scales in favor of getting the 26-year-old back in the lineup. Rookie Lawrence Pilut played over Beaulieu and Casey Nelson rejoined the club from his conditioning assignment in Rochester on Monday, further pushing Beaulieu down the pecking order.

"Of course, I think I should be in the lineup every night," Beaulieu said. "But that's just me as a player being competitive and that's how we are. It's a difficult spot. Call it what you want. I don't really know what it is. I'm just trying to be a pro here."

Beaulieu said if a trade does happen, he'll be thrilled to get back on the ice, but saddened at the way his two years in Buffalo have ended.

"I've come to love these guys in this locker room and the biggest thing for me is to work hard," Beaulieu said. "Guys on this team can look to me as a leader. I take pride on being a good teammate and it's something I've worked hard at even though I never expected to be in this situation. When you're dealt a hand, you kind of just have to play it."

The Sabres only have two unrestricted free agents in wingers Jeff Skinner and Jason Pominville. Representatives for Skinner, who is second in the NHL with 36 goals, are working on a long-term deal with the team and it's not imperative it gets done before the deadline.

Skinner maintained his no-trade clause that came with him from Carolina and is not likely to waive it for a possible deal to a team higher up in the standings. His focus has been to stay on Jack Eichel's wing for multiple seasons.

Pominville, meanwhile, could draw interest if the Sabres agree to keep part of his $5.6 million cap hit. Former GM Darcy Regier traded Pominville to Minnesota at the deadline in 2013 and Botterill reacquired him from the Wild in the summer of 2017. Pominville has a partial no-trade clause.

"Honestly I'm just trying to help the team win. This is where my mind and my head is at," Pominville said Monday. "You know how much I've always loved being here. I've always loved putting this jersey on. I don't envision myself playing anywhere else. All my focus and attention is here to try to turn things around and get us where we're hoping to be and where we've put a lot of work into. I'm hoping to be a part of that."

Housley wasn't interested in talking trade much Monday, preferring to keep the focus on the Sabres' long shot playoff chances and their game against the Panthers. They'll need a much better performance than Sunday's 4-1 loss in New Jersey, a game in which the Sabres rang up 35 shots on goal but never seem overly dangerous on offense.

"Obviously we can't control that," the coach said of the looming deadline. "What we can control is playing against a tough opponent tomorrow. ... We've got a big game and we have to come back and play a similar type game. Get more net-front presence, execute when we need to and capitalize on our opportunities. If we get the first goal, maybe that changes the complexion. That's what we can control."

Beaulieu is one of seven restricted free agents the Sabres have on their roster for next year. That list includes goalie Linus Ullmark, defenseman Jake McCabe and forwards Evan Rodrigues, Johan Larsson, Zemgus Girgensons and C.J. Smith.

As playoff race slips away, Sabres left with no answers on the ice or off it