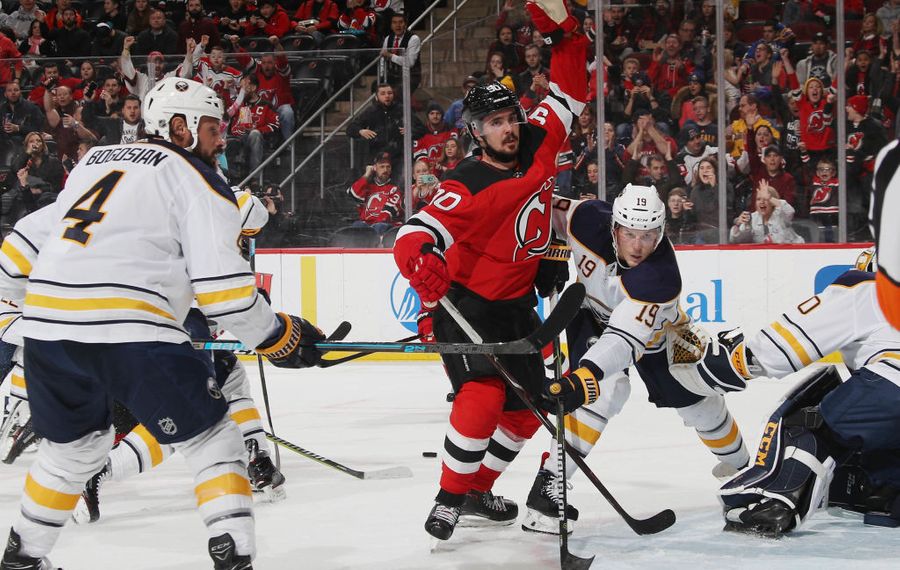 NEWARK, N.J. – The Buffalo Sabres called up defenseman Casey Nelson from his conditioning assignment in Rochester on Sunday and told him to head to Florida, where he'll join the team for practice on Monday at BB&T Center in Sunrise.

Nelson thus did not play in Sunday's 4-1 loss to the New Jersey Devils as Matt Hunwick took the place of the injured Marco Scandella. Coach Phil Housley said Scandella remains in Buffalo for evaluation and had no further update on him.

It would appear likely that Scandella will miss both games on the Florida trip and move to the injured reserve list to make room on the roster for Nelson, who has not played since he suffered an upper-body injury Dec. 4 against Toronto. Sunday was Nelson's 28th straight game out of the lineup.

Casey Mittelstadt returned to the lineup after missing two games with an lower-body injury and took his regular spot centering Buffalo's second line. Kyle Okposo made the trip, but did not play after taking a shot to the chin in his fight Friday with Tony DeAngelo of the New York Rangers.

Housley said Saturday that Okposo, who had major concussion issues in the summer of 2017, did not suffer a recurrence of that injury. The fact that he was on the team flight clearly backs up that point. Okposo was seen meeting with team trainers before the game but did not participate in the warmup and was thus unavailable for comment.

There was plenty of tension during the pregame warmup between Sabres defenseman Zach Bogosian and fourth-line Devils forward Kurtis Gabriel. The pair collided by catching skates at one point near the center red line and were yelling at each other multiple times during the session. Bogosian offered a quick cross-check and a slash that were not answered.

At one point, Gabriel shot a puck down the ice toward the Buffalo net and Bogosian responded by sending one into the Devils zone in the direction of a group of players. The pair skated and chirped again in the final couple minutes of the session, with Devils forward and former Sabre Drew Stafford skating between them as a peacemaker.

Said a smiling Bogosian: "We bumped into each other. Just crossed up skates a little bit. That's about it."

Some remarkable history vs. New Jersey: The Sabres were 9-0-2 (two ties) in their first 11 meetings against the Devils after they moved to Jersey in 1982. Buffalo was also 7-0-1 against the Kansas City Scouts from 1974-76, and 18-2-3 against the Colorado Rockies from 1976-82 and those are the two teams that eventually morphed into the Devils.

That means in the first 42 games of that franchise's inception, covering all three cities, Buffalo was a stunning 34-2-6 against Kansas City-Colorado-New Jersey. The domination has hardly held.

As playoff race slips away, Sabres left with no answers on the ice or off it