I hoped to drive to Cooperstown this month with a few workers from the New Era Cap Co., folks from the floor of the cap-making plant in Derby, to walk the halls of the National Baseball Hall of Fame. That is the game's Valhalla, where artifacts have the feel of sacred relics, and what artifact is more revered than a baseball cap?

Many of those caps were made by everyday people from Western New York. I saw the Cooperstown trip as another long-shot way to change a mind or jog a conscience amid desperate efforts to save the plant.

I was kidding myself. As the workers understood all too well, the thing was done. That became nail-in-the-casket obvious this week, when New Era and the Communications Workers of America, the union representing many in the plant, confirmed they had settled on a severance plan the CWA described as disappointing.

The news was almost lost in the all-too-rich juxtaposition of Amazon's change of heart in New York City. For the New Era workers, then, it still feels as if the moment demands an epitaph. What they did mattered, growing in regional meaning over the past 30 or 40 years as Bethlehem Steel and Trico and so many iconic Western New York manufacturers disappeared.

From the outside, at least, we figured those cap-making jobs were a lasting part of the civic DNA. I can remember, as a kid, riding past that plant with my parents. My folks were working people who lived in rented houses and drove used cars, but like many in the region, they took ownership in points of pride about greater Buffalo.

In a baseball family where I learned of the courage of Lou Gehrig and Jackie Robinson before I started kindergarten, my parents told me, with a touch of awe: Many caps worn by Major Leaguers are made here, those two last words taking on ultimate power.

They were not sewn together by rich guys talking policy in lush downtown offices, but by regular people who carried lunch buckets, sometimes wrapped tape around their fingers and built their lives to match the up-and-down drumbeat of the machines.

All of that will soon go silent. In a statement last November, New Era executive Chris Koch called the shutdown a way to "keep pace with changes in our industry." If so, it makes you wonder:

What has the industry become? 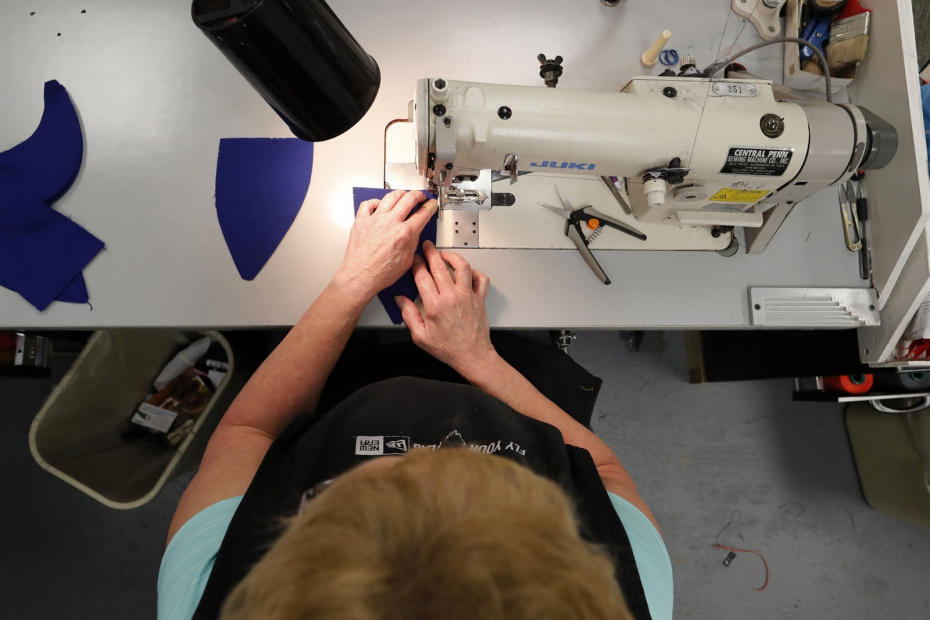 The lost jobs involve workers who averaged 19 years of experience, men and women who worked furiously at piecework for an average of $35,000 a year. The decision is being pitched as another shuffle in a changing economy, and I think the idea is that we are supposed to offer a quick sigh and at least be glad the corporate headquarters is still here.

Sorry. What gave New Era its deepest resonance was not just a name on a stadium wall or a flagship store behind sleek walls on Delaware Avenue or even all the people working hard at corporate marketing and strategy.

At the core was this: Baseball caps worn by the game's immortals were made by workers who pulled themselves out of bed, often before dawn, to drive the Skyway or rural highways toward Derby, and then to show up in the parking lot of the factory.

Call me naïve — God knows I have it coming — but I was among those hoping for a miracle. The reality seemed too much like savage comedy: Downstate, Gov. Andrew Cuomo and New York City Mayor Bill De Blasio supported billions in tax breaks for Amazon, a corporate titan that reportedly will again pay no federal taxes in 2019.

In Derby, some 200 men and women who sat with pencil and paper each January, figuring out tax payments that cut too close to the bone, will lose jobs making an iconic American product as part of what was painted by the company as some no-other-way transition.

On one level, the empty feeling in the communal gut was all too familiar - no different than, say, new fear of the possible loss of 300 jobs at Ingersoll Rand, or the response to any hurtful manufacturing blows we endured in the last half-century.

Yet New Era, in many ways, was atypical. Not only is the company fully homegrown, its tale so deeply intertwined with Buffalo, but Major League Baseball dictates that its caps must be made in the United States. How could we not find a way to keep doing it here, where the workers in Derby did piecework and hardly required hefty wages? Is this not among the unique situations where men and women could still make a well-loved product within a changing Buffalo?

The Derby plant turns out about 4.5 million caps a year. Most are expected to now be produced abroad – in China, Vietnam, Bangladesh and Haiti – while the caps specifically for official use by big league teams will be made at a New Era facility in Miami.

Many of us hoped Major League Commissioner Rob Manfred, an Upstate native, would swoop in to do what he did less than two years ago in Easton, Pa., where he both celebrated saving hundreds of longtime jobs for people making big league uniforms, and spoke of MLB's gratitude toward such dedicated workers.

I know there was a dream amid advocates for the plant that the Major League Baseball Players Association might go beyond offering an expression of sympathy, maybe even by sending a few big-name players to reaffirm the connection and lift the tale onto the national radar.

None of it came to be. New Era did not budge. Such civic leaders as Assemblyman Sean Ryan and Erie County Executive Mark Poloncarz stayed in there and gave it a shot, while Rev. Kirk Laubenstein brought together his Coalition for Economic Justice, which gathers union groups and churches and civic activists, to hold rallies and try somehow to pry open the decision.

No go. This week, the union confirmed its final deal with management. Erin Bowie, a CWA staff representative, said it would be a mistake to believe there ever was real hope of a reversal since the jarring day the shutdown was announced.

In three months of discussions, she said, union officials never picked up a flicker of a sense that the company might change its mind. That was an illusion carried around instead by those of us who believed the little cap factory equated to something spiritually larger, a direct link between an ethic we grew up with, and the major leagues.

No need, then, for the statement of the trip to Cooperstown, where these workers could reflect upon how the caps they sewed and prepared collectively live on as baseball history.

No need to wonder who among them made the cap that Hall of Fame inductee Mariano Rivera wore in an all-star game, or the one Charlie Morton pulled on before he won the seventh game of the 2017 World Series for the Houston Astros, or the one umpire Brian Gorman had on his head as he umpired the final game at Shea Stadium.

Those caps were created by Western New Yorkers who put care and toil into every stitch, caps that always showed up at the most important and unforgettable moments in baseball.

A lot of us made sure our children knew of that connection, in its own way as striking a Western New York landmark as any of the familiar towers on the skyline.

Company officials say the plant simply stopped making business sense, but the shutdown leaves behind a larger kind of cost. We dreamed, or many of us did, that New Era officials would put this bond above whatever took over in their boardroom, that they would find a way to save such a soulful, fundamentally Buffalo operation simply through a higher imperative of place and loyalty.

The problem is, all too often, that is not made here anymore.