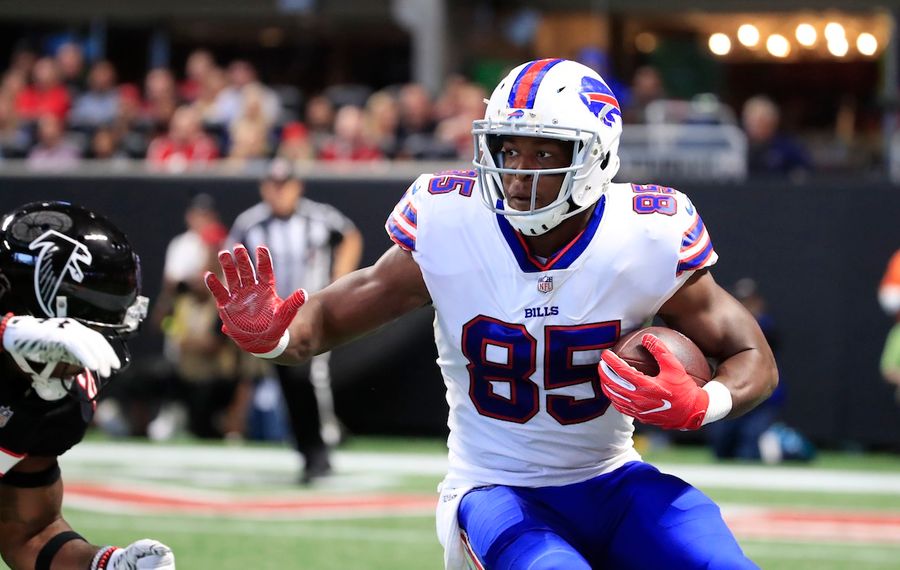 The first dominoes of the Buffalo Bills’ offseason have started to fall.

The addition of offensive lineman Spencer Long follows a pattern established last year by General Manager Brandon Beane of pursuing players released by their former team ahead of the official start of free agency.

The release of tight end Charles Clay also was an expected move – one that freed up another $4.5 million in cap space. Speaking of Clay, and what that move might mean for next season, let’s start there with this week’s Mailbag …

Rick McGuire asks: Now that Charles Clay has been released, do you think there’s ANY chance Brandon Beane will attempt to trade for someone like Dallas Goedert from Philadelphia? He may be available with the Eagles having Zach Ertz and Goedert wouldn’t be going to the NFC. The kid is really good!

Aran Heaney asks: Your thoughts on drafting a tight end high (either of the Iowa kids) vs. pursuing someone in free agency?

Jay Skurski: Goedert was the Eagles’ second-round pick just last year, and is coming off a rookie season with 33 catches for 334 yards and four touchdowns. Even with Ertz, I don’t see the Eagles trading a player like that away. Why would they? He’s on a cost-controlled contract, and gives the team two starting-caliber tight ends, which is a luxury for any offense. I think it’s far more likely that the Bills look for a tight end in this year’s draft. It’s looked at as a strong year for the position, with 21 players getting invites to the NFL Scouting Combine. It they don’t address tight end in free agency, it wouldn’t shock me to see the Bills use a pick as early as the second round on a tight end.

Minus released Charles Clay, here are some of the Bills' tight end options

As for Aran’s question, the top free agent at the position is Oakland’s Jared Cook. He’ll be 32 at the start of next season, but is coming off a career year in which he made 68 catches for 896 yards and six touchdowns. Would he go for a short-term contract? If so, I’d be interested in that, but I wouldn’t want to go past three years at his age. The Bengals’ trio of Tyler Eifert, Tyler Kroft and C.J. Uzomah are next on the list. Eifert and Kroft have injury concerns, so I wouldn’t count on them being the unquestioned starter if they were signed.

With only Jason Croom on the roster at the position currently, I could see the Bills signing a mid-level free agent and drafting one early – but not in the first round.

Brian Rossignol asks: Do you think this regime can handle big-personality guys like Antonio Brown? The consensus is 50-50.

Jay: I think they can, but I question if they want to. I’ve thought a lot about the possibility of adding Brown over the last few weeks, and struggle to see how he fits here. If he wasn’t happy catching passes from a future Hall of Famer such as Ben Roethlisberger, how’s he going to react when Josh Allen overthrows him? On one hand, the addition of Brown would be an obvious upgrade to the offense – giving the team the best receiver that they’ve ever had. The red flags with him can’t be ignored, though. He quit on his team before a must-win game. You can roll your eyes at the culture talk that comes out of One Bills Drive all you want, but that has to at least be a concern. It would also undermine all the talk of culture mattering to Beane and coach Sean McDermott.

Then there’s the issue of what the Steelers want in return. Brown publicly declaring he wants out certainly didn’t improve his trade value, but Pittsburgh ultimately controls his destiny. How much is a 31-year-old receiver, even one as talented as Brown, worth in a trade, particularly when considering the baggage he brings?

Steve Tripi asks: How do you reconcile the absence of hope for a Bills fan in the era of Tom Brady? It’s been 20 years, and no one can beat him. Spare me the “if Josh Allen pans out” spin. I want an honest assessment. How can anyone believe any team in the AFC will ever win anything until he retires?

Furthermore, is the Patriots’ monopoly bad for football’s future? We learned in economics that monopolies are bad for economies. They undercut competition, offer fewer choices for consumers, driving prices up. Ought not the league address this problem? Relegation? Realignment?

Jay: Here’s my honest assessment: You are right. There is very little that should give a Bills fan hope. I said several years ago I wouldn’t pick against the Patriots until Brady and Bill Belichick are gone, and I stand by that. As requested, I won’t make the case about Allen panning out, because it’s too soon to say whether that will actually happen. The only glimmer of hope I can offer is this: Brady can’t play forever. Yes, he says he wants to make it to 45, but I’ll believe that when I see it. The end of the Patriots’ reign has to be coming soon (right?).

As for the second part, the idea of the Patriots playing in the Alliance of American Football does make me laugh, but seriously, their dynasty isn’t a bad thing for football. That’s reflected in the TV ratings every year. Sports are more fun when there’s an enemy, and for basically everyone not from New England, that’s the Patriots.

Justin asks: Do you think defensive end Frank Clark is a big free agent the Bills go after?

Jay: I don’t think so. I understand the desire for another pass rusher, but the Bills committed decent money to Trent Murphy last year and have to hope he’s better a year removed from ACL surgery. They also still have Jerry Hughes and Shaq Lawson under contract, with Hughes making big money.

The other reason I don’t see Clark being a target is the character concerns he comes with. He was arrested on a domestic violence charge in college, leading to his dismissal at Michigan, and the allegations against him were, in a word, disgusting. The charge was later pleaded down to disorderly conduct over the objections of the arresting officers. In short, he’s not the type of player I’d want to win with.

Paul Catalano asks: In what scenario do you believe the Bills move up or down in the draft right now?

Joseph Spinelli asks: If they have a desire to trade down and an acceptable offer on the table, which player(s) still on the board do you think would change their minds, if any?

Jay: I could see a scenario that’s the reverse of what happened last year, when the Bills traded away a starter and the 21st pick in the draft for the No. 12 pick with Cincinnati. That made it easier for them to get in position to draft Allen by moving up again to No. 7. I could also see the Bills interested in a move like the Colts made, picking up three second-round picks to move down three spots with the Jets – a trade that looks like it could benefit both teams. Obviously, the ninth pick likely won’t fetch that much, but there’s no doubt the Bills are in a good spot for possibly trading down. With the quarterback-needy Broncos (Joe Flacco is not the answer) right behind them, other teams could want to make sure they leapfrog Denver to get their guy. That puts the Bills in a good spot. Beane saying at the Senior Bowl the team “doesn’t have to be” in the top 10 is his way of saying “we’re open for business. Call us.”

As for Joseph’s question, which is a good one, it’s early, but my answer would be Nick Bosa or Quinnen Williams. I think the odds of either being there at No. 9 are close to zero, so I’m not banking on that scenario unfolding. If an acceptable trade offer to move down is made, I think the Bills take it.

BigD asks: How would you rate Josh Allen compared to other quarterbacks the Bills have drafted?

Jay: I mean, how far are we going back here? Let’s stick with the last two quarterbacks chosen in the first round – EJ Manuel and JP Losman. I’m more hopeful that Allen will be successful than those other two – but haven’t seen enough to determine one way or the other whether that will indeed happen.

Brendan Sweet asks: When do you think Tyree Jackson gets selected, and by whom? Any chance the Bills give him a look? Better Valentine: Bobby or Greg the Hammer?

Jay: The combine will be big for Jackson. Quarterbacks have a tendency to move up in the pre-draft process, and a good showing in Indianapolis would help Jackson do that. Jackson has been considered a late Day 3 prospect in most pre-draft rankings, but I could see him sneaking up to the fourth round. As for a team – how would it go over in Western New York if he landed in New England. Landing Tom Brady’s heir apparent has to be a priority for the Patriots.

As for the second part of that – easy! Greg the Hammer in a landslide. Did you see the Red Sox under Bobby Valentine? What a disaster that was. Greg the Hammer and Brutus “The Barber” Beefcake were the original Dream Team!

Robert Goodwin asks: What Bills player has broken your heart, made your heart flutter (I won’t tell Melissa), or whose absence has made the heart grow fonder?

Jay: Of course the first one has to be Scott Norwood, as it would be for any kid growing up in Western New York. The second one is tougher. I’ll go with George Wilson. Great story, great guy. As for the last one, I’ll go with Antoine Winfield. I didn’t appreciate how good he was until he left.

Louis Stromberg asks: Jay, I’m back from hiatus. Choose one of the following to be your valentine. Will also need the reason why. Takeo Spikes, George Wilson, Quinn Early, Peerless Price, Antoine Winfield.

Jay: Welcome back. I missed you. As mentioned above, Wilson. The guy appeared in a Mary J. Blige music video for crying out loud!

TNFP69 asks: Your new title for the moment is GM. Tell us what position you sign first in free agency – and as a bonus what his name is. Hope you and your family have a great vacation!

Jay: I sign a right tackle first. I make an offer to Carolina’s Daryl Williams (I know, another former Panther) or Miami’s Ja’Wuan James and see who bites first. As always, thanks for all the questions, and playing along with the Valentine’s Day theme. No mailbag next week – tee times in Florida are calling.