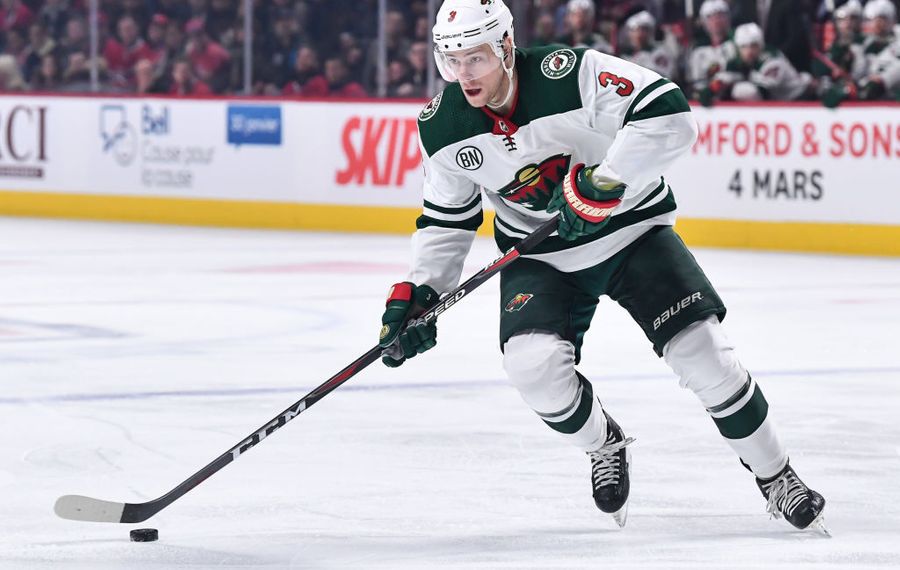 The Sabres are desperate to add some depth at center, both to try to salvage this season and move into next year. The one guy this corner has had in mind for a while is Minnesota's Charlie Coyle, who is signed through next year at a very reasonable $3.2 million cap hit.

The Wild are teetering on the edge of the playoffs and might not make it in the West with the way St. Louis and Chicago have been surging. They've already fired General Manager Chuck Fletcher – Tim Murray's former trading buddy – and new GM Paul Fenton has to be itching to make moves.

It seemed, however, that a Coyle move was dead when captain Mikko Koivu tore a knee ligament here Feb. 5 during a center-ice collision with Sabres winger Tage Thompson. Not so fast.

The 6-foot-2 Coyle, who can also play right wing, probably can still be had at a cost and you wonder if it might mean one of the Sabres' three first-round draft picks. A major retooling appears imminent in Minny, which has made the playoffs for six consecutive seasons but has combined to win just four games in getting blitzed out of the first round the last three seasons.

Coyle, 26, played at Boston University before Jack Eichel, but they certainly know each other. His offensive production isn't massive, with career highs of 21 goals and 56 points, but he would allow Casey Mittelstadt to play at a more reasonable level as the No. 3 center. Coyle has 10 goals and 18 assists with a plus-2 rating this season.

As first reported by veteran Wild beat writer Michael Russo of The Athletic, owner Craig Leipold gave Fenton a green light last week to make big moves. Even if it costs the team a playoff berth this year. Zach Parise and Ryan Suter's massive free agent contracts can't be moved but plenty of others can be. Coyle, Mikael Grandlund and defensemen Jared Spurgeon and Jonas Brodin might all be available.

Same for old friend Marcus Foligno, who wouldn't be on the Sabres' radar but could conceivably interest a playoff team looking for some more jam.

You wonder how much momentum the selloff gained Friday night, when the Wild blew a three-goal lead at home and lost in overtime to pathetic New Jersey, 5-4. They even lost to Devils goaltender Cory Schneider, who was 0-17-4 dating to December 2017.

The funny thing about it was the collapse came the night after coach Bruce Boudreau foolishly went on KFAN Radio in Minnesota – knowing a selloff could be coming – and said the Wild are going back to the playoffs.

"I can tell you right now: I'm not Joe Namath, but we are going to make the playoffs," the Wild coach said. "And we're going to be somebody hard to deal with ... I'm making that prediction right now."

Good luck to Boudreau. Especially if Fenton starts the instant makeover the Wild need. Plenty of other clubs, including the Sabres, are watching things closely.

Jack Eichel was featured Saturday on NHL Network's "Ice Time," discussing how he first learned to skate and his initial love of hockey. He appeared along with Detroit's Dylan Larkin, Columbus' Seth Jones and Chris Kreider of the New York Rangers.

Eichel talked about his start at the Janis Rink in Lowell, Mass., which happened because his parents bought his sister skating lessons and she didn't enjoy them. So Eichel took them over and advanced from there to hockey, to the point where he was carrying what he called a "little yellow plastic hockey stick" around his house.

The league is getting better at this kind of player outreach, showing the personal side so fans get to learn more about the stars.

"We're not the NBA or the NFL or Major League Baseball and we know we have more of an uphill climb to get the same type of publicity and experience to market our players," Eichel said after practice Thursday. "You see how other leagues do it and we know hockey is more under the radar and players are more conservative.

"But it's still good for players to be seen on places like NHL Network. Without their helmet on. Seeing them in a different light other than on the ice."

It's been a big year for the NHL in doing a better job publicizing the game and its players. Nashville's P.K. Subban has his own reality show on NBCSN and the network's platforms dubbed "The PK Project," and even hosted a one-hour variety program akin to Jimmy Fallon's talk show following the All-Star Skills Challenge.

"I haven't seen it, but building your brand as a person and getting your personality out is important," Eichel said. "Hockey can take you so far but at the end of the day you're only going to play a certain number of years. At the end of your career, you've got a lot of life left and you're going to want to have something to go to whether it has something to do with hockey or it doesn't. You can get a lot of doors opened for you if people gravitate to your personality and like who you are off the ice."

NBC has also done a much better job this year with its schedule of game telecasts. The network's studio show has traveled to Winnipeg and there have been multiple appearances by Auston Matthews-led Toronto and Connor McDavid-led Edmonton, including Wednesday's game at Pittsburgh.

Not having Montreal and Calgary on the schedule much is proving to be a mistake, but one the network could not have anticipated when it made out the schedule. The willingness to show Canadian teams – and not just overdose fans on Chicago, Pittsburgh, Washington, Boston, the New York Rangers and Philadelphia – is a long-overdue step by NBC.

"It's big to put any team with stars on. That's what people are going to want to watch," Eichel said. "It's the same thing as watching, say, a New York Giants game to see what Odell [Beckham] is going to do. For us as players, it's important to get yourself out there. We're trying to generate more revenue, market ourselves as much as we can and we're seeing the league take a lot of the right steps to help us do it."

A word on Skinner

There's far too much concern on social media about the Sabres not signing Jeff Skinner. Chill pills are required here.

The Sabres' record this season and whether they fall out of the playoff picture has virtually no impact on whether they sign Skinner. The sides are talking. He wants to be here. He's made that clear to his agent, to the team, his teammates and even the media.

He's two hours or so from his home in suburban Toronto and from his trainers. He's in a hockey market, something he had no idea about when he was playing in Carolina. He's on Eichel's wing. The Sabres will pay him yacht-fulls of Terry Pegula's money.

They will work out a deal. They're not going to trade him at the deadline. Remember, he still has a no-movement clause, which he waived to come to Buffalo. He's going nowhere. Jason Botterill will get this deal done in due time. The overriding concern should be far more about Botterill's misdeeds in formulating another flawed roster and what he's going to do to fix it.

Old friend Robin Lehner was a tad indignant while in town last week when he was asked how he and Islanders goalie partner Thomas Greiss were 1-2 in the league in both goals-against average and save percentage. Both have had plenty of good moments in their careers as well as periods of inconsistency. And Lehner, of course, dealt with his premature end to last season when he entered alcohol rehab.

Mike Harrington: Lehner takes another big step in his personal battle with win over Sabres

But it's all coming together for both of them now in Barry Trotz's system and under the tutelage of goalie coaches Piero Greco and Mitch Korn. The Islanders gave up the most goals in the league last season (296) and have given up the fewest this season (136 entering Saturday's game with Edmonton). The only other time an NHL team has gone worst-to-first in goals against was the 1917-18 Ottawa Senators.

"I said it the other day to a Swedish newspaper. I don't care what anyone says. I had my struggles here off the ice. On the ice, I felt like I performed. I don't care what any of you guys say or anyone in this building says. Ask Botterill and those guys. Before I crashed, they thought I was a really good player on this team."

Fair enough. It's easy to forget that Lehner's first two seasons in Buffalo saw him post GAAs of 2.47 and 2.68, combined with save percentages of .924 and .920. For much of the 2016-17 season, in fact, Lehner was leading the league in save percentage at home.

"I was consistently around 92 percent (in saves) my three years here," Lehner said. "I did a lot of good things."

Speaking of the Islanders, Saturday's game against Edmonton was their final one of the regular season at Barclays Center in Brooklyn, the arena that's mostly loathed by their players and fans. Their last 12 games, including the March 30 visit from the Sabres, will be played at NYCB Live, the renovated version of Nassau Coliseum.

Fans have been waiting for a decision on the postseason and it came down Friday, with the team announcing it will play the first round at Nassau and all remaining games in Brooklyn.

Barclays, with its higher capacity and higher prices, drives more revenue for the league. But it's a terrible place to watch hockey. Which makes laughable the team's release pointing out the decision was made because the Coliseum "does not qualify as an NHL major league facility."

Anyone who has been to Brooklyn knows what a joke Barclays is. One entire end of seats sits mostly empty because the goal is obstructed.

Sabres winger Kyle Okposo, the former Islanders standout, simply said "no" when asked prior to the team and  league's announcement if the issue should be up for debate.

"There's no choice there. None," Okposo said. "I mean, there's one choice and that's it."

Okposo said he was pumped to check the Sabres' schedule release last June and see that their road game against the Islanders will be in his old home.

"I'm so excited," he said. "I knew they were playing a fair amount of their games there ... The fact that we're playing at the 'Coli', that's home. That's home on the Island for me. The Coliseum. Played my first seven years there. It's probably where they should be."

Inside the Sabres: Trying to prevent phones, games from impinging on team bonding