The Thruway toll plazas in Buffalo and Rochester got a pretty good workout as a small team of innovators developed the newest Labatt beer.

"I think everyone in this company who lives in Rochester and here in Buffalo has made the drive at least 100 times," said Ryan Brady, the Labatt USA brewer who created it.

Labatt Blue Citra – a hoppy session lager that debuted in cans in recent days across upstate New York, Pennsylvania, Michigan and Ohio – became the first in a Buffalo-Rochester collaborative process expected to pump a larger variety of Labatt beer into the U.S. market in coming years.

"It's a fairly complex beer but approachable in nature," said Orchard Park native Rob Hertenstein, the brand manager for Labatt USA who worked with Brady and a small team to bring off Citra. “The taste is fruity, tropical, citrusy. Then it finishes really clean."

In early 2017, Hertenstein approached corporate brewers in Rochester with an idea to make a new beer that might one day stand alongside Labatt Blue and Blue Light in delighting a legion of American beer drinkers.

Brady, then assistant brewmaster at Genesee – and a key player in that company’s experimental pilot brewery – was tapped to create the recipe. 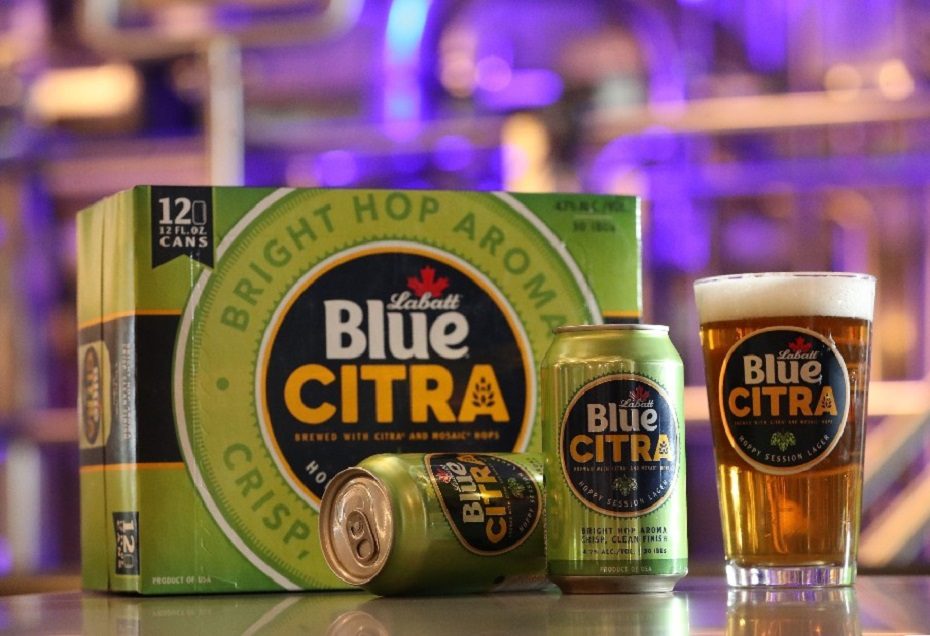 A Canadian design company was the lone business from north of the border that had a hand in the new Labatt Blue Citra, now being sold in a dozen 12-ounce or six 16-ounce packs, or 24-ounce singles. (Sharon Cantillon/Buffalo News)

Corporate executives set no timelines. They also asked for secrecy, so the team set up a code name, Project Patrick Star, a nod to a character on the TV cartoon “SpongeBob SquarePants.”

"We could play around, kind of experiment," Hertenstein said. "It was a good process because the brewers were always used to hearing us say, 'We want this style, this type of beer.' In this case, we said, 'This is kind of what we want it to smell like, taste like, but we don't know what it is.' ”

The brand leaders wanted a beer with a citrus smell, slight hops taste at the start (a nod to the growing popularity of India Pale Ales, or IPAs), and a crisp, clean finish that a typical Labatt drinker would appreciate.

"We didn't want to blow anybody's palate halfway through the first can. We wanted to keep the bitterness low to add to the drinkability of the beer,” said Brady, a Detroit native and former homebrewer who worked in a craft brewery before joining the North American Breweries staff in Rochester.

Brady started with half-barrel test batches, about 15 gallons at a time. There were 13 in all. He either drove them on the Thruway to Buffalo, or Hertenstein, along with one or two others, drove 60 miles east to Rochester for a tasting.

The brewer made a hoppy blonde on the first try, "which wasn't exactly what we wanted," Hertenstein said. Then came a pilsner, an ale and variations of several styles.

"There was one that was a little dark in color,” Brady said. “That was clearly a no."

Brady worked with 18 different hops varieties during the experimentation.

“It was never a single-hopped beer,” he said. “It was always a combination of hops. Sometimes we just changed one. Sometimes we changed whole cloth. It was a fun process." 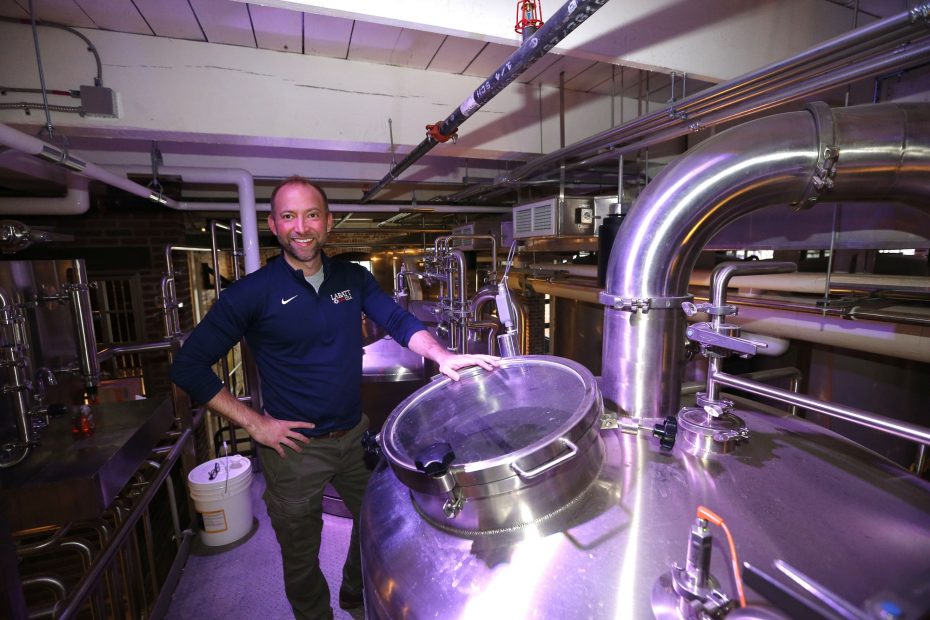 "We thought once people tried a pint, they'd be believers," Rob Hertenstein, Labatt USA brand manager, said of the approach he and his team used in rolling out the new Labatt Blue Citra. (Robert Kirkham/Buffalo News)

The final test batch was among the most straightforward. The hoppy session lager – a style that takes longer to ferment than an ale, using different yeast – included water, pale malt, and Mosaic and Citra hops, the latter pair of ingredients at about a 50/50 mix.

Hertenstein and the team loved the batch – but not the 6.1 percent alcohol by volume (ABV). They were looking for something below 5 percent – the threshold for what is considered a session beer.

Brady tweaked the recipe by using less malt, something that can boost the hop profile, he said, so he added two more twists.

The Mosaic hops were added late in the boil, the tail end of the start of the beer-making process in most brew houses.

“That was done to bring out the aroma, he said. “It also adds just a touch of bitterness that we were looking for in the flavor."

The beer is called Citra because that variety of hops carried the taste profile the team preferred, one that is fruity and dank, and which has become a cornerstone of many New England-style IPAs. Brady “dry hopped” those hops, meaning he added them after fermentation ended, and before it was filtered.

The company rolled out that batch last October, in kegs. Visitors to a national Labatt USA sales conference were among the first to try it, in Buffalo, as were patrons of the Brew House – which opened with Brady as brewmaster – and the adjoining Draft Room. It also went to select restaurants and taverns in the company’s other markets.

"What was really important for this beer was growing awareness and getting people to try it, which the on-premises empowers," Hertenstein said. "We thought once people tried a pint, they'd be believers. We were getting very good initial feedback in the Draft Room and the Brew House. Customers were talking about the beer the way we were talking about the beer, which was really encouraging. 'Hoppy but approachable' were the words we were hearing. That has been a springboard for us launching in a package."

The company released its latest 500 barrels of Labatt Blue Citra in cans – a dozen 12-ounce or six 16-ounce packs, or 24-ounce singles – which have become available during the last two weeks in grocery stores and beverage retailers across the region and sales territory.

The only Canadian influence? Marks design company, which worked with the Labatt USA brand team on the pale green design of the cans and packaging.

The beer already has become a top seller in the Cobblestone District operation, though Blue Light is No. 1, Hertenstein said.

"The intent of it isn't to turn Labatt Blue drinkers into craft beer drinkers," Brady said. "We still want them to drink Blue. That's our product, as well. It's another side of the consumer spectrum to enjoy."

Batches of Citra will continue to come out of the Rochester brewery as demand dictates. Meanwhile, Labatt USA plans to release a seasonal variety pack in April that includes Blue Light Lime, Grapefruit and Blood Orange flavors, the latter of which replaces Blue Light Tangerine. Those beers also are brewed in Rochester.

North American Breweries has since owned Labatt USA. Its other holdings include Genesee Brewing Company in Rochester, as well as Magic Hat Brewing in Burlington, Vt.; Pyramid Brewing in Seattle; and Portland Brewing in Oregon.

Buffalo became headquarters for Labatt USA shortly before the split, when operations moved from Connecticut to Fountain Plaza. The corporate office moved in September toward the Buffalo waterfront, taking the second floor of the Labatt House, a repurposed former manufacturing building owned by Pegula Sports & Entertainment.

The century-old building in the Cobblestone District includes the Draft House restaurant, owned by PSE, and the Labatt Brew House, an innovation brewery in space Labatt USA leases from the Pegula family enterprise. Both opened last November.

Citra will continue to be sold on its own – and also be offered in markets outside Labatt USA core territories, Hertenstein said.

The aim also is to keep the Rochester-Buffalo route bustling to spawn future Labatt USA entries into the U.S. beer market – recipes that now first will be brewed in Buffalo, in the 10-barrel innovation brewery at the Labatt Brew House, and, when warranted, made in greater amounts in the corporate brewing operation in Rochester.

A small team already is looking at five or six prospects.

"The good thing is we can just sit here and have a beer," Hertenstein said recently about he and Brady, while they two hung out in the Brew House taproom. "We're both beer lovers. The best part of having our Brew House so intimate in nature? Our beertenders can get feedback right from the customers, and I can come back here and play bartender, too."