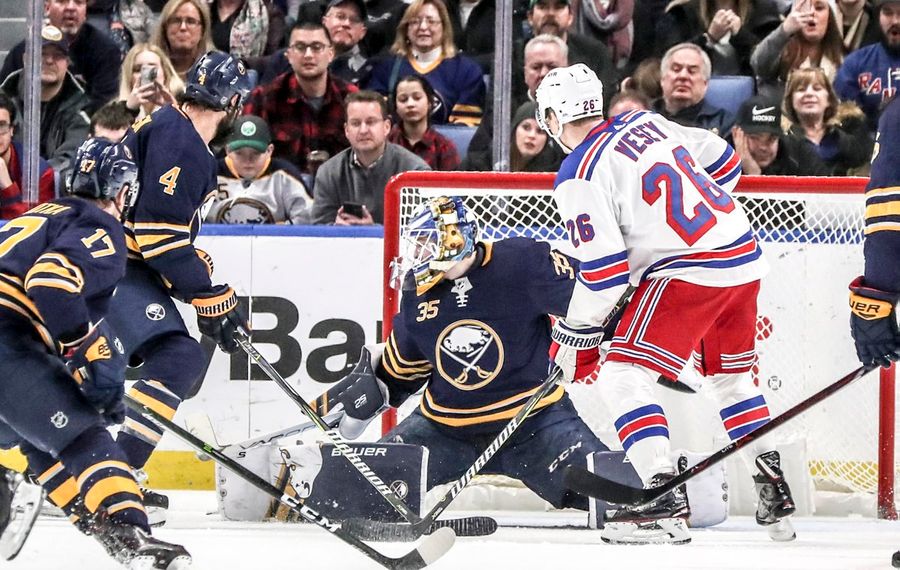 The best thing about the Sabres right now is they're getting out of town so most of you won't have to see them in person for a while.

As somebody on Twitter reminded me during the first intermission of Friday night's 6-2 loss to the New York Rangers, the first period was the type of play where legendary broadcast analyst Mike Robitaille would have cracked that the Sabres were playing "softer than a 3-minute egg."

Phil Housley, who is clearly running out of answers, spanned the globe of talking points about his team after this one. He checked off a lot of boxes with these quotes, all of which are quite damning to any hockey team.

We were easy to play against.

We don't have time to wait around.

We thought it was going to be easy.

We didn't kill a play. We just let them roam.

Bingo. Hard to argue any of those points. And it's quite an indictment for a coach to call his team "soft." That's a buzzword that raises hackles in a dressing room. But this isn't a playoff team right now.

It's a pretty seminal moment for Housley deep into his second season. It will be interesting to see what reaction that sparks. Does his team respond in any manner or is there a Dan Bylsma-style tuneout undertaken by the players in hopes Jason Botterill tries again with a different coach?

For the record, firing a coach every two years is a guarantee of mediocrity. And like many places where the coach does get sent packing, the GM is usually as much or perhaps even more at fault. Let's not forget who put this roster together and who traded Ryan O'Reilly for Patrik Berglund, Vladimir Sobotka and Tage Thompson.

That said, it's Housley's team that came out looking unprepared and mentally deficient in the defensive zone. Jack Eichel nearly put the puck in his own net on the first shift of the night and that was a bad omen.

There were coverage miscues, horrible passes and lackadaisical plays all over the ice.

This was one of those games you wish Chris Drury was still around in uniform. He would have made every player sit at his locker and answer to this atrocity. When the doors were opened, the equipment was hung and everyone but Jeff Skinner was off to the restricted areas.

Now, in fairness, the Sabres will make anyone available and Skinner, Zach Bogosian and Jack Eichel all came out when requested and met the media. That trio is among those regularly answering questions. Still, it would have been nice to see some actual volunteers.

And it's not like they had any real answers anyway. Eichel's eyes were blank trying to explain this one – because there really was no explanation for it.

"It just goes back to work," Eichel said. "I don't think we played as a five-man unit tonight."

It was 2-0 after one period before the Sabres got a goal from Skinner 53 seconds into the second period. Then go look up the replay on the Rangers' next goal 58 seconds later. It's the very definition of soft.

Lawrence Pilut loses the battle on the wall to Pavel Buchnevich and allows the puck to be passed to the doorstep. Jake McCabe doesn't do much to tie up Jimmy Vesey. Linus Ullmark can't make the save.

Bogosian was stuck on the ice for more than two minutes on one shift in the second period and he slammed the bench door with such force that the noise echoed through the arena. That might have been one of the Sabres' biggest hits of the evening.

It's not like the Rangers were defensive dynamos in this one either. Skinner was somehow left wide open twice and converted both opportunities. Rasmus Dahlin hit a post and Eichel whizzed a one-timer off the crossbar, both on Skinner feeds.

There were plenty of chances for the Sabres to get even in the game before it fell apart with three goals in the final 4:01, including a pair in eight seconds after Ullmark misplayed the puck off his pad behind the net to give Vladislav Namestikov a belated Valentine's Day gift.

The Sabres have not won two in a row – two in a row! – since mid-December. This from a team that somehow won 10 straight in November. They're going nowhere playing like that. They're 0-8-1 in the next game after their last nine wins.

"It's tough to really pinpoint right now, to be honest with you," Eichel said. "I don't think we had a very good start to the game. We got a little bit back in the second. It seems like we're all over them, got a pretty push going. If we get that third goal it's a different story and we don't."

"We have to string some games together here. It's coming down to the homestretch," said Bogosian. "Consistency is something we've been up and down with this year. We definitely have to find that if we're going to give ourselves a chance."

Housley is clearly fed up. You wonder if Botterill is going to give him any help at the trade deadline or if the GM is going to let that winning streak go into the history books with no reward and simply try to win a Calder Cup this year in Rochester.

It's a mistake. But Botterill might be chalking this season up, pocketing his three first-round draft picks come June and moving on. He's got nine days left to prove otherwise.

"There has to be total urgency," Housley said, referring to his players although it would apply to the GM as well. "And that's just one of the things I have to keep reminding them. That's my job."