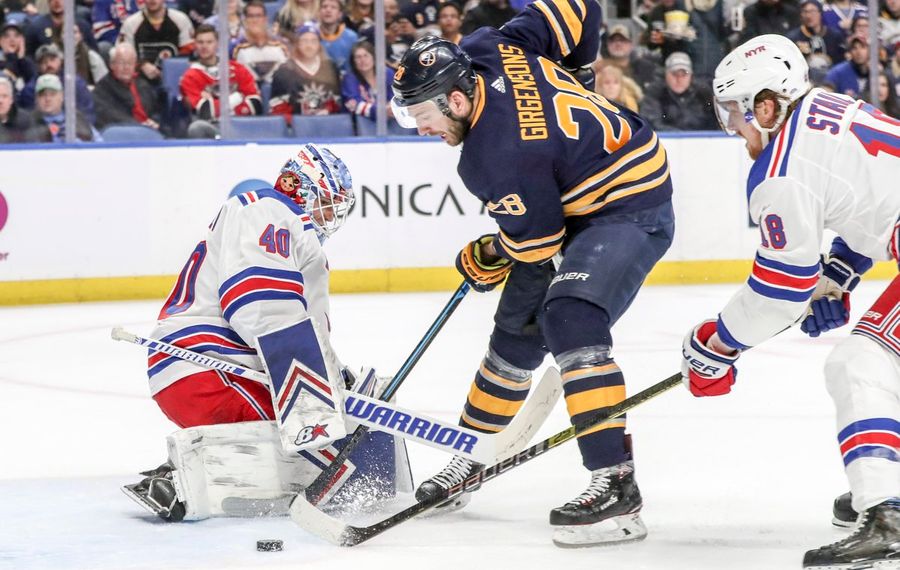 When the Buffalo Sabres' regular season ends in less than two months, they may look back on this seven-game homestand as a turning point. It began with a disastrous loss to Chicago and ended with a missed opportunity Friday night in KeyBank Center.

Jeff Skinner scored two goals, his 35th and 36th of the season, but the Sabres struggled defensively in a 6-2 loss to the New York Rangers. Buffalo, now 28-22-7, earned seven of a possible 14 points during the homestand and remain four points out of the second wild-card playoff spot.

The Sabres allowed two goals in an eight-second span to the Rangers late in the third period, and New York added an empty-netter with 57 seconds remaining. Linus Ullmark made only 23 saves for the Sabres. Rangers goalie Alexandar Georgiev made 12 saves in the third period, including two on Tage Thompson shots from the slot.

Skinner scored both his goals in the second period to twice cut the deficit to one goal. Boo Nieves, Jesper Fast, Jimmy Vesey, Pavel Buchnevich and Vladislav Namestnikov scored for the Rangers (25-24-8), who entered the game 11 points out of a playoff spot.

Okposo leaves: Sabres winger Kyle Okposo left the game and did not return after being punched in the face by Rangers defenseman Tony DeAngelo during a third-period fight. Okposo was hospitalized in March 2017 after a concussion and resulting reaction to medication.

Opening salvo: The Rangers took a 1-0 lead when Nieves was left uncovered, and he shot a loose puck in the slot over Ullmark's shoulder at 4:09 into the first period. The sequence began when Marco Scandella committed a turnover, and neither Okposo nor Johan Larsson could clear the puck from the slot.

Again: Fast deflected Namestnikov's slap shot to give the Rangers a 2-0 lead with 5:57 left in the first period.

Sluggish first: The Sabres seized momentum when they earned a power play 55 seconds into the game, and Rasmus Dahlin nearly scored when his one-timer hit the post. While they generated scoring chances, they looked sluggish in the defensive zone.

$kinner: Skinner scored his 35th goal of the season 53 seconds into the second period with a wrist shot from the slot. He was left alone in front of the net, and Jason Pominville made the pass after beating a Rangers defender to a loose puck.

58 seconds: That is all the Rangers would need to answer following Skinner's first goal. Vesey beat Jake McCabe to the net and snuck a shot past Ullmark for a 3-1 lead at 1:51 into the second period.

$$kinner: Skinner snapped the Sabres' 0-for-7 slump on the power play when he collected a loose puck at the top of the right circle and scored with a snap shot to cut the deficit to 3-2 with 3:04 left in the second period. It was Skinner's eighth multi-goal game and his 36th goal of the season.

Lineup: Defenseman Zach Bogosian returned after missing two games with a lower-body injury, but center Casey Mittelstadt missed a second straight game because of a lower-body injury. Nathan Beaulieu and Matt Hunwick were healthy scratches. Ullmark started for the 11th time in 13 games.

Buffalo connection: Former Sabres coach Lindy Ruff, still the franchise's all-time leader in games (1,165) and wins (571) is an assistant coach for the Rangers. New York's two assistant general managers, Jim Schoenfeld and Chris Drury, also played in Buffalo. Schoenfeld played 11 seasons and is a member of the franchise's hall of fame. Drury was a captain in parts of his three seasons with the team.

Next: The Sabres are scheduled to practice Saturday and will depart for New Jersey, where they will play the Devils at 6 p.m. Sunday.