PASADENA, Calif. – Notes and quotes from the semi-annual press tour of the Television Critics Association:

Brown, who plays Randall Pearson on NBC’s “This Is Us,” was in Buffalo the spring and summer of 2016 when he played the African-American man falsely accused of raping a white woman in the film “Marshall.”

Chadwick Boseman, whose career has taken off since “Marshall” with the lead role in “Black Panther,” played future Supreme Court Justice Thurgood Marshall in the film. Josh Gad played the attorney who helped Marshall on the case, and Kate Hudson played the accuser.

“I love Buffalo,” said Brown in an interview on the “This Is Us” set. “Buffalo was great. We had a wonderful time. Food was great. I didn’t know much about Buffalo cuisine. David Chappelle did a surprise concert while I was there.

“There is like a river walk, is that what it is? Where you ride your bikes and there is water you are overlooking,” he said, referring to Canalside. “Really pretty. The folks were very, very gracious and accepting to Chad and Josh and myself and Kate. I had a wonderful time. Are you from Buffalo? Big up to Buffalo.” 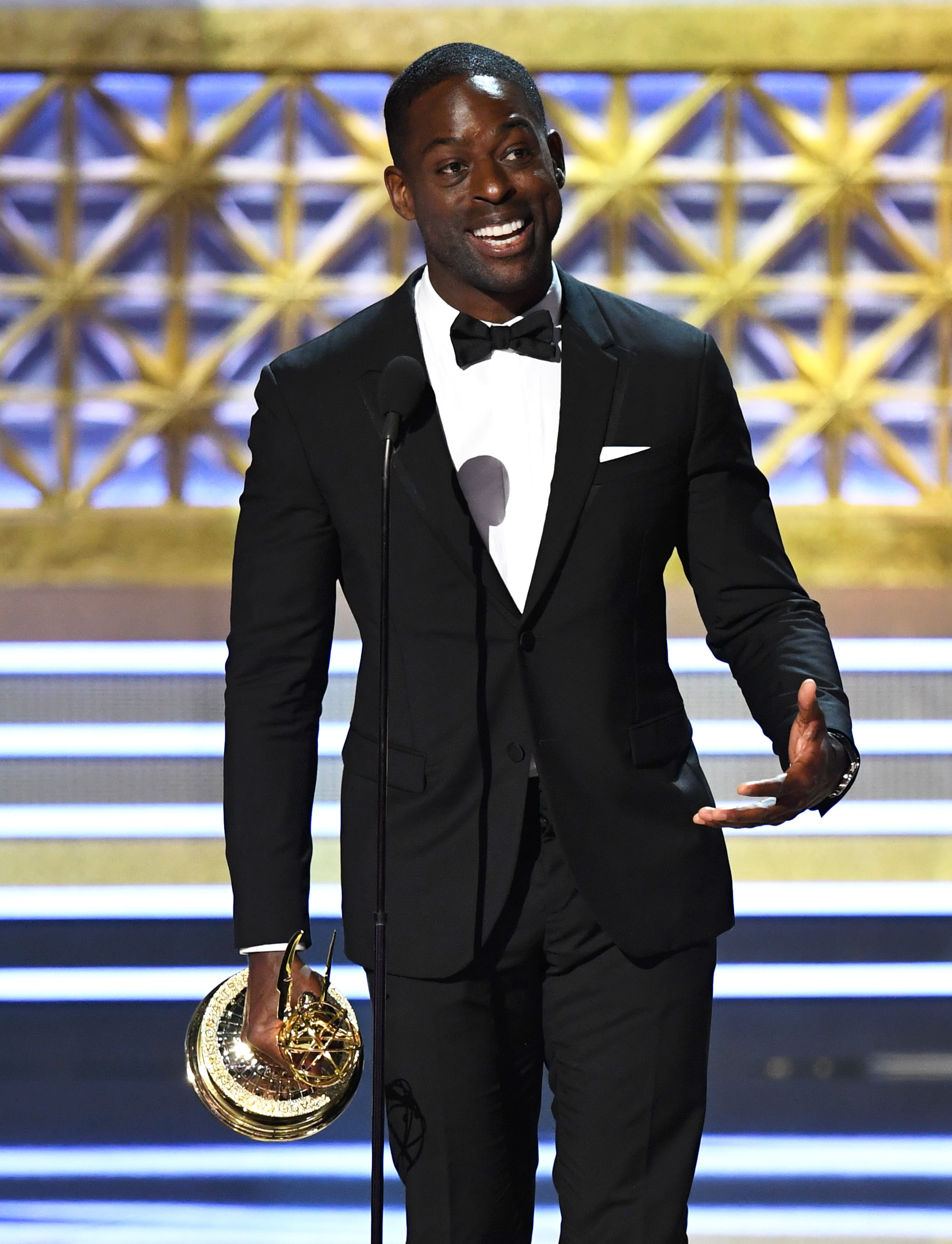 Sterling K. Brown accepts the Outstanding Lead Actor in a Drama Series for "This Is Us" onstage in 2017 during the 69th Annual Primetime Emmy Awards. (Kevin Winter/Getty Images)

By the way, anyone who is lucky enough to get a ticket to the current Broadway production of "To Kill a Mockingbird" starring Jeff Daniels may be reminded of similarities between Harper Lee's novel and the case highlighted in the movie "Marshall."

Brown, of course, plays a popular character on “This Is Us” who is the adopted African-American member of the loving Pearson family.

He said he could relate to the feeling of being different that Randall experiences.

Brown referenced as one example attending the 2011 movie premiere of “Our Idiot Brother” at the Sundance Film Festival along with bigger named co-stars at the time – Paul Rudd, Zooey Deschanel, Elizabeth Banks and Emily Mortimer.

He said he bought his own ticket, watched the movie, people clapped and a panel followed.

“People were asking, ‘why did you choose to do this project?' " recalled Brown. “Paul said, 'I hadn’t done a family sort of thing.’ The ladies were saying similar stuff.”

Then Brown was asked the question.

“I auditioned,” he replied.

“Later on, they had to do a press day, Entertainment Weekly was the first outlet,” added Brown. “As we were going to the thing, all I could do was repeat, ‘They don’t want to talk to me. They want to talk to Paul.' We are walking in and sweat is pouring out of my body … this is the weirdest thing. I said to Paul, ‘I don’t think I should go in there. I don’t think they really want to talk to me. He’s like, ‘It is not that big of a deal. But if you are not comfortable, don’t go. But I think you should do it.’ And I stood out in the cold and I called my manager …. She said go for a few minutes.”

He went in and he got a question.

“It was like cool, they gave us AMC movie tickets for a year," he said laughing. "I’m like 'Movie tickets. What? I get swag?' The rest of the day I was doing press.”

One of the most interesting things to learn during the “This Is Us” session was that eight of the 12 people in the writers' room of the program are women.

I couldn’t help but think of my late father when I interviewed Michael Douglas on the set of my favorite Netflix comedy, “The Kominsky Method.” I’m sure Dad would have smiled if I told him I asked Douglas how many people have asked him the meaning of altacocker, a Yiddish word my father used to say that Douglas used in a speech after he won a Golden Globe award.

“I met a few,” laughed Douglas. “It is great, because it has added to everybody’s vernacular. The funny thing is watching people trying to spell it.”

I was just as curious to know how it was possible that Douglas and his co-star Alan Arkin had never met each other before co-starring in “The Kominsky Method.”

“I don’t know. It happens,” said Douglas. "Chuck (Lorre, the series creator) sent me the script and I just loved it and he mentioned Alan as a possible. Great. He is absolutely great. I was ready to sign on. Alan said I want to meet him first. So we met up at the Beverly Hills Hotel for a little lunch, for half an hour. I said, ‘You want to get married? Let’s get married.' "

So far, it is a perfect comedy marriage.

For personal reasons – I have a bad hip – I couldn’t resist asking Lorre, "The Kominsky Method” creator, when he is going to do a hip surgery episode on the program. Lorre said it wasn’t planned for the second season, but he didn’t rule out a “Titanium Hip” episode down the road.

One of the more amusing moments of the “This Is Us” interview session came when Melanie Liburd, who plays Kevin’s (Justin Hartley) girlfriend and Beth’s cousin Zoe, began to speak with an accent.

“Give them a moment, because they’re like 'She’s British,' " said Susan Kelechi Watson, who plays Beth.

It was surprising but not unusual. Numerous actors and actresses in TV shows are British or Australian and have learned to “speak American” on their shows. You also might be surprised to learn that Janet Montgomery, who plays Dr. Laura Bloom on “New Amsterdam,” is British, too.