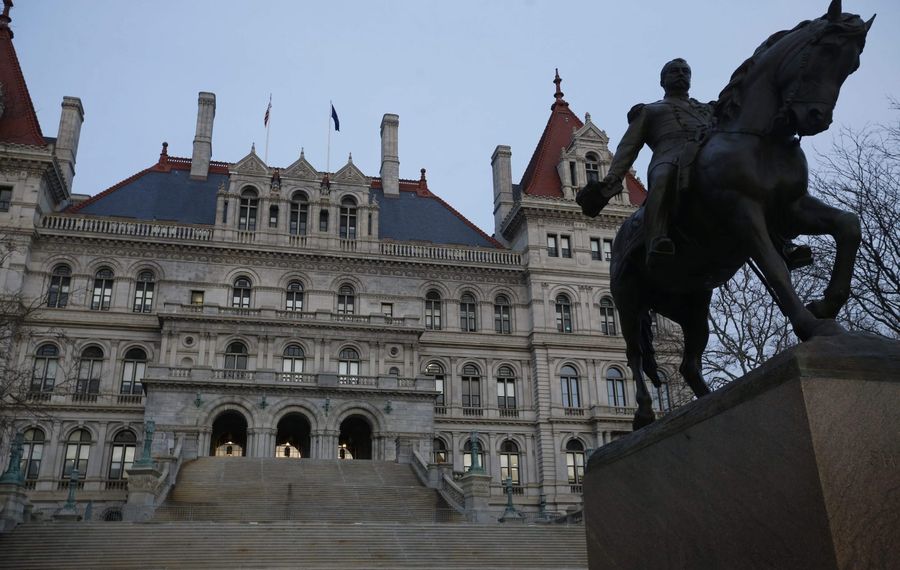 ALBANY – Chloe Rivera was excited to get a job in government and politics when, at age 24 in 2012, then-Assembly powerhouse Vito Lopez hired her as a legislative aide.

“I did not know when I took the job that he was a serial sexual harasser," said Rivera, one of several female former legislative staffers who told state lawmakers about their nightmare experiences with workplace sexual harassment in Albany.

At one point during the four months she could last working for Lopez, a veteran lawmaker and then-Brooklyn Democratic Party boss, Rivera said the assemblyman – who died in 2015 – hired a 14-year-old intern. The lawmaker asked Rivera to start dressing more like the intern.

“Chloe’s experiences were nearly identical to mine," testified Leah Herbert, who was Lopez’s chief of staff and herself a victim of his unwanted sexual outreaches. A half-dozen women complained of sexual harassment by Lopez, of demands they meet him in hotel rooms and unwanted touching.

The two women blasted the way their cases were handled by the Assembly, which settled the cases with them in 2015. They said their careers suffered. One talked of getting demoted in the Assembly after bringing a complaint and of periods of joblessness with no health insurance after fleeing their state jobs. They signed non-disclosure settlement agreements that Herbert said included a $20,000 fine for each time she spoke out against the Assembly or Lopez.

“After six years of silence … I speak out now because I have to," Herbert said.

The two women, and the others who testified, all spoke the consequences of sexual harassment: depression, anxiety and post-traumatic stress disorder.

“We came forward not because we were brave but because we did not have a choice," Rivera said.

Testimony also was given by Elias Farah, an attorney from Buffalo who brought a complaint against then-Assemblywoman Angela Wozniak, an Erie County Republican, for workplace retaliation. Wozniak was admonished in 2016 by the Assembly for having a brief relationship with Farah, who had been a member of her staff, and then for retaliating against him after he ended the relationship.

He talked of internal personnel changes needed in the Legislature, but also saved much of his criticism for the news media, which he said sensationalized his run-in with Wozniak. “The media loved this … It’s not funny. It’s not salacious. It’s my life," he said, noting he had to move from his hometown of Buffalo to St. Lawrence County. He recently moved back to Buffalo.

Wednesday was a day long coming in Albany.

State lawmakers 27 years ago held a hearing to consider the problems and remedies for workplace sexual harassment incidents. In that time since the last legislative hearing on the issue, Albany has been hit by headline after headline of sexual harassment and assault cases involving lawmakers, staffers and officials in the executive branch, including a tabloid frenzy over the Lopez case years ago.

“Today is the first hearing in nearly three decades to address a subject that is not merely overlooked, but actively avoided – kept hidden by unstated rules about what we do and don’t talk about, and what we do and don’t listen to,'' said Senator Alessandra Biaggi, a Bronx Democrat.

Biaggi last fall unseated a powerful lawmaker, Jeff Klein, who was accused by a Senate staffer of sexual misconduct. That woman, Erica Vladimer, who accused Klein of forcibly kissing her outside an Albany bar in 2015, was among those testifying before lawmakers on Wednesday. “I chose to leave state government without reporting what happened," she said of concerns that sexual harassment cases aren’t treated fairly in Albany. The incident involving Klein came to light in 2018.

The gathering in Albany came after pressure from a group of women – who dubbed themselves the Sexual Harassment Working Group – who were sexually harassed or abused in their state legislative jobs, in one case a generation ago.

On Wednesday, legislators sought to portray a new climate in Albany with zero tolerance to workplace sexual harassment, both in government and private settings.

In questioning Reardon, though, it became clear that lawmakers were thinking on the fly about measures to target sexual harassment problems.

Lawmakers, for instance, said it’s good that the labor agency is sending directives to employers to have written policies against sexual harassment and annual training sessions for employees.

But Biaggi, the Bronx lawmaker, and Sen. James Skoufis, a Hudson Valley Democrat, wondered why the labor agency has no enforcement abilities to ensure employers are following the directives. Skoufis told the labor commissioner the state needs to be “more proactive” to check up on employers’ compliance with the state’s sexual harassment policies.

“That’s up to you if you want to put it in the policy," Reardon told Skoufis.

A study was presented to the joint Assembly/Senate panel revealing that nearly 11 percent of New Yorkers over the age of 18 report having experienced sexual harassment in which a superior at work “tried to trade job benefits for sexual favors,’’ a new report out today has found.

The study by the School of Industrial and Labor Relations at Cornell University also found that 83 percent of New Yorkers want public officials to do more to address the problems associated with sexual harassment.

The ILR school at Cornell also found that 12.2 percent of women reported encountering workplace quid pro quo sexual harassment, while 9.5 percent of men said they had also run into similar problems. Just under half of men and women reporting such harassment at work said the experiences “had an impact on (their) work life … career advancement … or ability to obtain, keep or perform a job.”

Elizabeth Crothers, a former Assembly staffer, has long accused Michael Boxley, a former top adviser to Speaker Silver, of raping her in 2001. The Assembly conducted an investigation but the case was closed without a finding. Boxley two years later was arrested – handcuffed and marched out of his Capitol office by police – on rape charges against a different woman. He was convicted of sexual misconduct.

In her testimony Wednesday, Crothers recalled the Assembly reaction to her allegations was all about damage control. Silver, since convicted on separate corruption charges, a generation ago had wasn’t interested in her story, she said, “but in containing the fallout.’’

“What you do today here matters and I hope you all understand that," Crothers told lawmakers. She said the stories lawmakers heard Wednesday should lead to further personnel changes within the Legislature. She asked for an end to “trite press releases” and “loopholes” that let offenders off the hook.

“There are no more sidelines to stand on," Crothers said.