The Zemsky family and their partners are planning more than $19 million in new development projects in Larkinville – including the first Paula's Donuts in Buffalo's core, opening sometime next year.

The goal is to fulfill what they see as the Larkin District's potential, recreating the activity and density that the area had more than a century ago when it was a thriving commercial and residential community. That means not only redeveloping the remaining houses and commercial buildings – a process that has been underway for more than a decade – but also building new developments on empty land.

"One of our goals as developers is to continue to infill the neighborhood," said partner Leslie Zemsky. "It’s not our intention to have parking lots all over the neighborhood, and that’s not how Larkinville was in the '40s."

The sizes and dimensions of the three buildings will vary significantly, but all will have first-floor retail and apartments above – more than 76 units in all. They will include:

• A two-story building at 872 Seneca, anchored by Paula's, plus four apartments above.

• Another two-story building next door, at 864 Seneca, with ground-floor commercial and two apartments.

• A five-story building on a gravel-covered vacant lot at 799 Seneca, currently envisioned with five retail stores, 50,000 square feet of office space and 70 apartments.

"I’m so excited. It's happening," said Zemsky, citing a longstanding vision that she and her husband, Howard, shared for the historic neighborhood they began developing years ago. 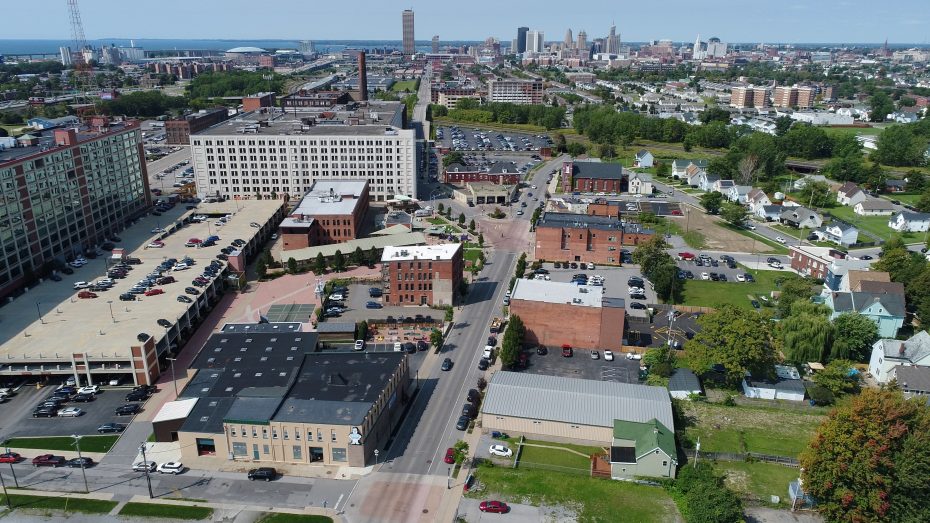 An overview of the Larkinville neighborhood. (Derek Gee/Buffalo News)

The Zemskys have been the driving force behind the growth of Larkinville since they teamed up with Joseph Petrella and others to buy a sprawling warehouse and convert it into the Larkin at Exchange office building. The renovated 600,000-square-foot building is now fully occupied with a host of office tenants, led by KeyBank. And together with the adjacent Larkin Square entertainment zone, it anchors the surrounding district that now includes office buildings, restaurants, bars and some apartments.

But the Zemskys are pursuing more, even bringing additional family members into the effort to run their own businesses and projects. That includes restoring a historic bowling alley at 829 Seneca and bringing back the Larkin Men's Club building near the Square. And they've set their sights on further projects extending eastward to fill in the gaps all the way to Smith Street.

At 872 Seneca, plans call for the Huber family to set up their fourth shop for their popular doughnut chain, on the first floor of an 8,000-square-foot building. It's actually a return to Buffalo for them, since their original location was on Kenmore Avenue, just inside city limits.

"We're really excited for them," Zemsky said. "Paula's has such a fan base in the City of Buffalo."

Under the plans by Schneider Architectural Services, the upper floor will contain two one-bedroom apartments of about 700 square feet each and two two-bedroom units of 1,000 square feet each. Rents have not yet been set.

Next door, adjacent to Buffalo Distilling Co., the Larkin partners want to put up a 4,000-square-foot building, with more first-floor retail and two two-bedroom apartments upstairs, with about 1,000 square feet in each, plus a corridor. No tenants are lined up yet, Zemsky said.

Those two buildings will be across the street from the Larkin Training Room and a yoga studio, as well as two houses the Zemskys previously purchased, restored and resold. Both are now occupied by businesses and apartment tenants.

"All of a sudden, it's a great vibe over there," she said.

Finally, plans are underway for Mill Race Commons, a proposed five-story building on a former brownfield site at 799 Seneca that has already been cleared, cleaned and covered over with gravel as an event parking lot. The site previously housed the Good Door Store, but had a long industrial history before that, and was named for the waterway that ran through what was originally called the Hydraulics District. 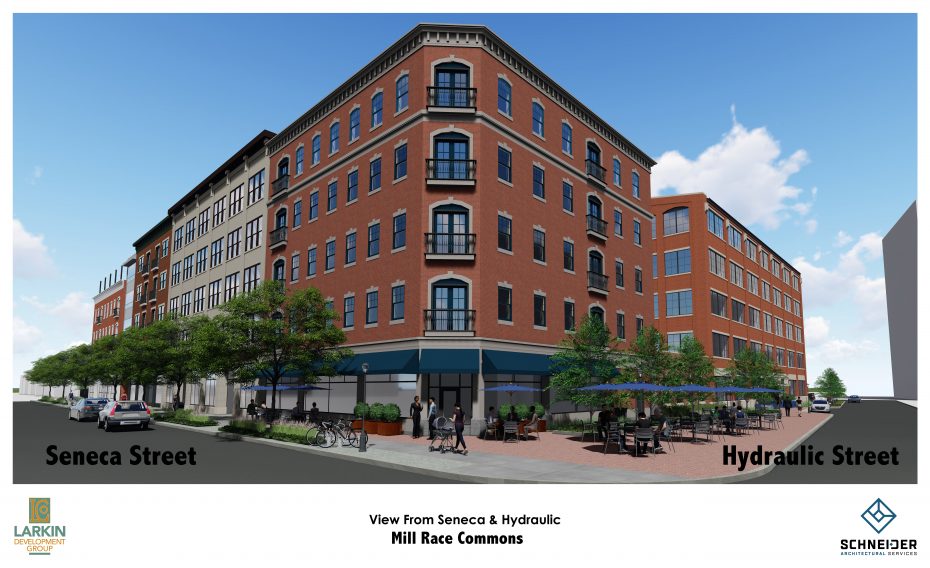 "We never intended that to be a long-term gravel lot," Zemsky said. "It was a prime location for us to do a new-build project."

Plans call for two wings of the 140,000-square-foot building, with one end running along Seneca Street that would contain retail shops on the ground level and 70 apartments upstairs, with a mix of four studios, 51 one-bedroom units and 15 doubles. It would also feature a swimming pool, fire pit and grill in a rear courtyard, as well as a rooftop patio for tenants, and a fitness center. 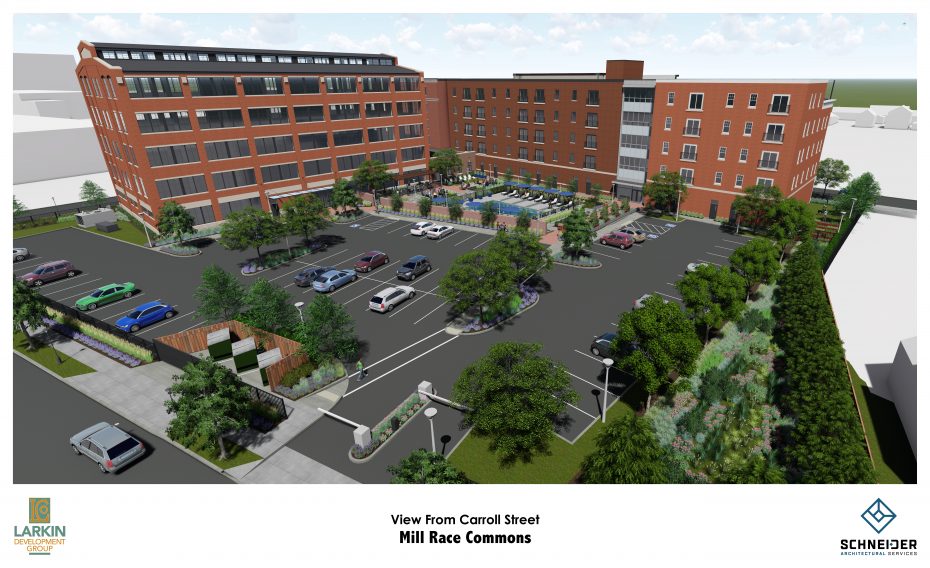 Around the corner on Hydraulic Street, the second wing – inspired by the design of an old foundry building – will have five floors of commercial office space, with 10,000 square feet on each level. It's within a short walk from Larkin at Exchange and Larkin Square.

No tenants are lined up yet, but Zemsky said they're not worried.

"Our building is full, so we know there's a strong interest among businesses to locate here in Larkinville," Zemsky said. "We see the appetite is still very robust for businesses wanting to be in this neighborhood. The employees love all the offerings of Larkinville."

Since the three nearby projects are happening simultaneously, the city Planning Board on Monday started an initial environmental review of the combined effort, which requires Planning Board, Zoning Board and Common Council approval, as well as a change in zoning for the property at 799 Seneca.

If approved, Zemsky said the group hopes to break ground in June and finish by the end of 2020, using state brownfield cleanup tax credits, bank loans and developer equity to finance the project.