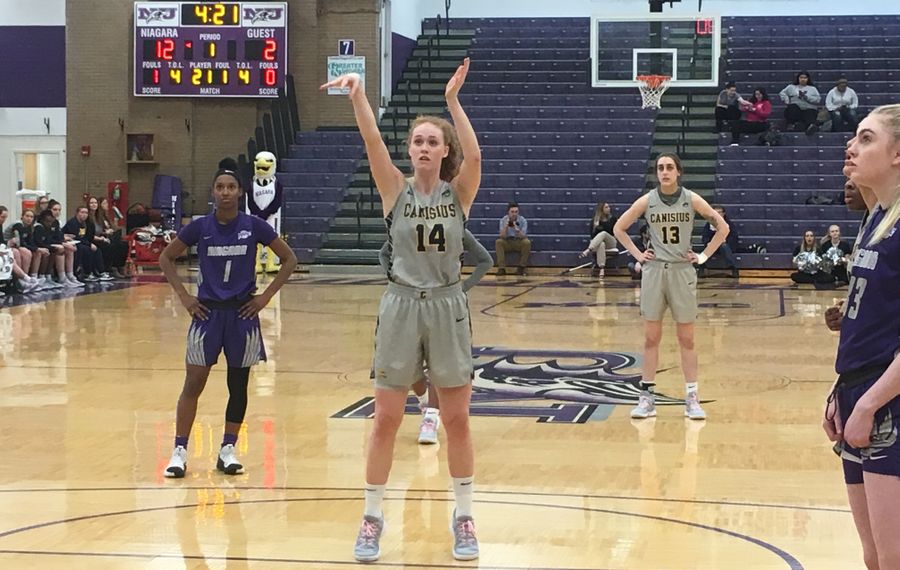 The 5-foot-9 junior from Brooklyn is delivering.

Moore scored 30 points Wednesday night to carry the Purple Eagles to a 74-52 rout of Canisius at the Gallagher Center.

Moore was the No. 3 offensive option last season on a Niagara team that featured two all-conference low-post players in Victoria Rampado and Kaylee Stroemple.

“We knew Jai was our best player coming back, so we wanted to make sure the guards were making more plays,” Pierce said. “For us it’s been more about sharing the ball, which is nice. The scouting report isn’t as easy as it was the last three years when you know they’re going to go to 22 (Rampado) and 44 (Stroemple), who did a tremendous job. But everything was going through them.”

Moore has increased her scoring from 10 ppg last season to 16.8 this year, third best in the Metro Atlantic Athletic Conference.

"It’s definitely much different, not to say last year wasn’t fun,” Moore said. “This year we’re running, it’s more open, anyone can get a touch. It fits with the young group we have; young, fresh legs who are ready to go.”

Canisius had no answer for Moore’s quickness and athleticism on drives or her outside shot. Moore hit 7 of 11 3-pointers and 11 of 19 shots overall.

“She’s decent,” deadpanned Griffs coach Scott Hemer. “She’s one of the best all-around players in this conference, for sure. If she gets downhill with the ball in her hand, she’s tough to defend, even if you rotate across and try to help on her. She creates her own shot. She gets up vertically.”

Niagara improved to 8-5 in the MAAC and 12-13 overall. The Purple Eagles stand fourth in the 11-team conference with five regular-season games to go.

How big a deal is that? The Purple Eagles haven’t had a winning season in the MAAC or a top-four finish in 14 years, since the 2004-05 campaign. Now all they need is two more wins to end that drought.

“That was one of our goals from the beginning of the year, to be over .500 but more importantly have a top four or five seed,” Pierce said. “We don’t want to play on the first day in the MAAC Tournament. We’re heading in that right direction.”

Moore helped blow the game open with two 23-foot 3-pointers during a 12-0 run early in the third quarter. That boosted Niagara’s lead to 47-27.

“I thought she had a good overall floor game,” Pierce said. “She scored a lot but she also had some assists and rebounds, and we also asked her to guard their best player some of the time.”

The play of point guard Maggie McIntyre, a 5-foot junior, also has been a boost for Niagara. She has upped her scoring average from 5.8 to 10.3 ppg. She contributed seven assists.

For Canisius, the loss was an egg-laying in what has been an encouraging first season under Hemer.

The Griffs’ offense entered the game leading the MAAC in field-goal percentage (.446) and 3-point shooting (.376). But the Griffs were smothered by Niagara’s perimeter defenders and managed only five assists. Canisius shot just 27 percent from the field and 18 percent (3 of 17) from 3-point range.

Canisius’ leading scorer, senior Sara Hinriksdottir, was held to eight points on 2 of 13 shooting from the field.

The Griffs got 12 points from junior forward Tiana Pugh and 10 apiece from guard D’Jhai Patterson-Ricks and Anndea Zeigler.

Canisius was picked to finish eighth and Niagara ninth in the preseason poll.

Both teams are on the road Saturday. Canisius visits Marist. Niagara visits Siena.