Allow me to transfer some of my confusion to innocent readers. Apart from that no-account groundhog not seeing his shadow in Punxsutawney, Pa., there is little credible evidence we’re heading into an early spring.

We have been periodically cold, with some brief flare-ups of warmth. Based on past and usually reliable evidence, though, we should be colder. Regular readers have seen me mention the Madden Julian Oscillation/MJO a few times, and throw my hands up in the air concerning explanations of how it works. It is truly esoteric stuff, and there is no handy-dandy graphic like a map to help you visualize it. But I’m going to take a shot at it.

The MJO has been under study for decades, and remains less than well understood. It is an oscillation that has eight phases, and those phases have different impacts around the globe and in North America in different seasons. First, I’ll show you what an MJO forecast looks like, courtesy of Weatherbell. Gobbledygook alert:

The green squiggly line is the mean forecast for its phrase into mid-March. The mean is the average of all the yellow squiggly lines in the European ensemble of 51 model runs. If you look at the green line forecast from the bigger black dot, its current phase, it is leading us into phase 8. In January-March, phase 8 has historically been associated with the coldest air being in the East and warmer air out in the West. We don’t fully understand why that is; just that it’s usually the case. Here is a composite of of temperatures associated with the different phases during the winter months. In the second column, the last frame down, you’ll see phase 8 and its correlation to more persistent cold: 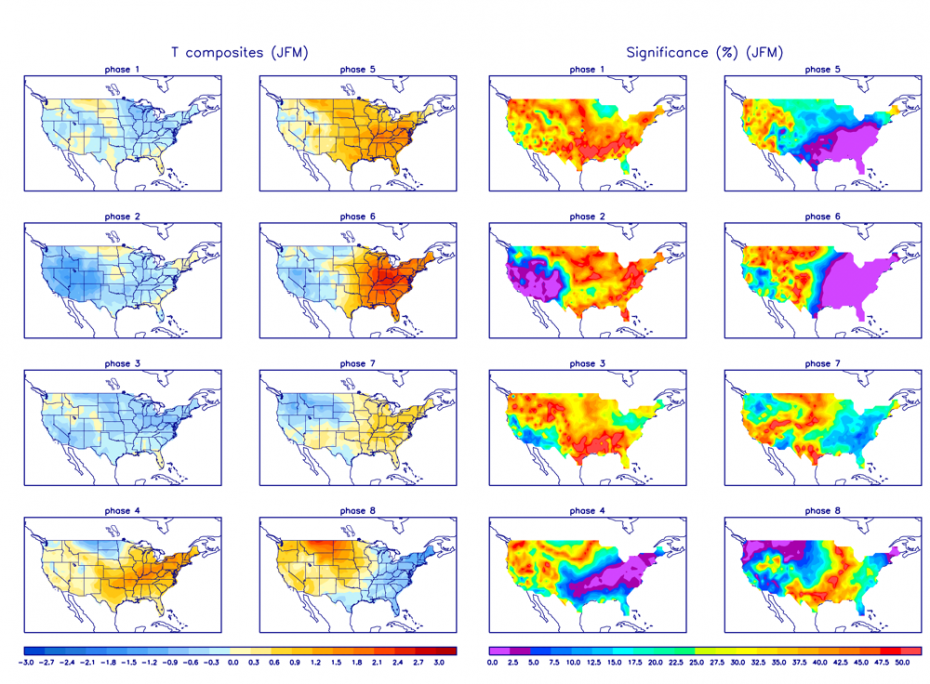 In terms of MJO climatology, the East should be getting colder next week as we head into phase 8. Instead, here is the look of the upper air-steering winds in the European ensemble for next Wednesday: 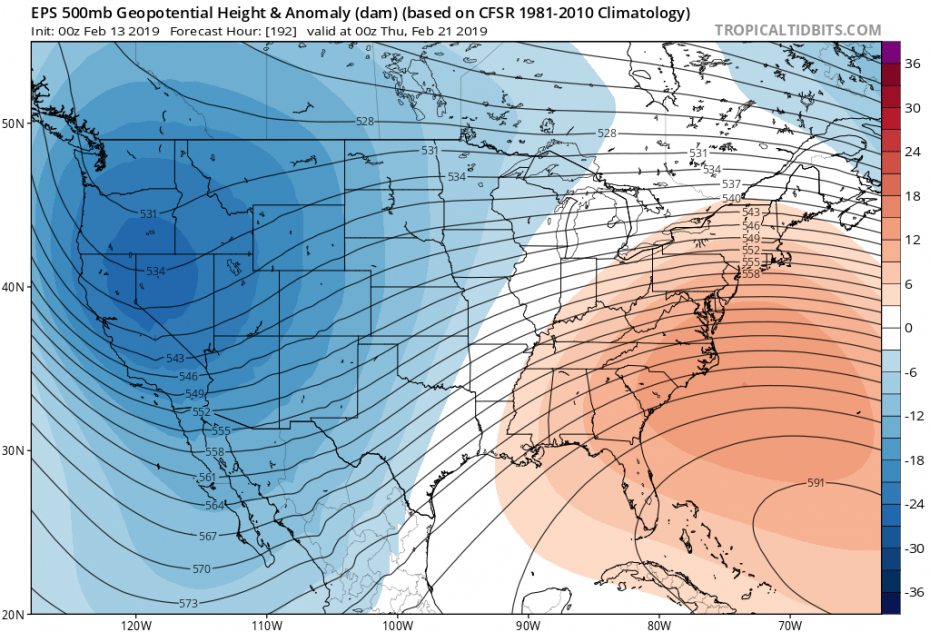 It does not look like phase 8 MJO weather. The American ensemble shows much the same, as does the Canadian.

The MJO is not the only variable in the equation that determines these patterns, but our reliance on it has grown in the last two decades as it turns out to be a more important oscillation than we used to think it was. Courtesy of IBM and the Weather Company Dr. Michael Ventrice, the European upper air ensemble in days 6-10 is emphatically forecasting a strong blocking high in the Pacific and another near the Southeast coast that typically shouldn’t be there during MJO phase 8: 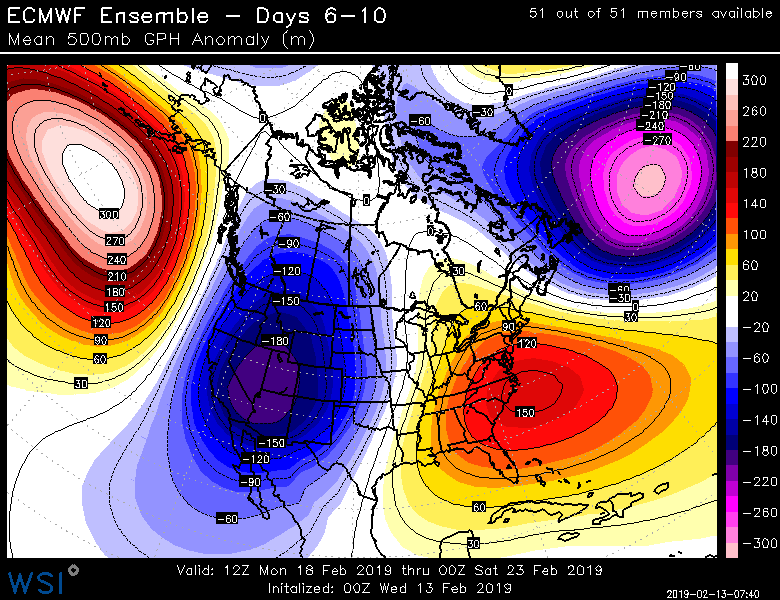 In the past, such highs would be mobile and transitory, but ensembles are showing much less mobility to these blocks. There may be some relationship to sea surface temperatures in the tropical Pacific and warming in the Arctic, but uncertainty abounds. However, ensembles that go out further in time do eventually show progression of the western core of the cold toward the East. That would be later this month and into the first half of March. By March 1, the American ensemble mean shows a progression of the Pacific ridge into western North America, and a return of a colder trough to the Great Lakes and Midwest.

The Canadian ensemble is a day slower, but shows the same tendency.

The overall return to a colder trough in the East and warmer ridge in the West can provide a pathway for waves of low pressure to move along cold fronts. This pathway can bring potential snowstorms along the boundary separating warmer air to the southeast from the polar air coming in from the northwest. At this very early juncture, this ensemble upper air projection at the end of February suggests that pathway would take most storms well to our south and east.

Even so, other disturbances and low pressure systems can race near us in such a pattern, bringing in periods of snow and wind. If the lake opens up some, the snow may include some lake effect. But you know the old story. In my book, trying to predict precipitation much beyond seven to 10 days is likely to dig up some fools’ gold. As of this writing, there are no "biggies" on the horizon during the next week.

In the meantime, I hope some papers get published this year as to why the MJO’s phase 8 has been misbehaving. The longer I engage in weather forecasting, the more variables keep rearing up. Most of us believe our mean warming climate has a great deal to do with increased variability. In the case of the MJO, we certainly have not yet figured out just how that is.