A young boy pressed the paper sign against the glass adjacent to the Buffalo Sabres’ bench inside KeyBank Center to catch Linus Ullmark’s attention as the 25-year-old goalie skated off the ice at the end of a pregame warmup.

On the sign, underneath a header that read “Life goals,” the boy listed two items: the Sabres' winning a Stanley Cup and receiving a stick from Ullmark. The affable, eccentric fan favorite skated over and gently flung his Bauer paddle over the pane of glass.

The child beamed as he hoisted the treasure as if he had won the Stanley Cup. Ullmark’s gesture was seen by the thousands waiting for the puck drop of a game against Chicago. Ullmark, however, does not seek recognition for such kindness, nor did the act surprise his teammates.

On the ice, Ullmark can be perceived by opponents as ultra-serious – he was not afraid to tell Dallas Stars captain Jamie Benn to be quiet during a 1-0 loss Jan. 30 – but he is beloved by teammates for his quirks, quips and genuine kindness.

Ullmark, the Sabres' starter in eight of the past 12 games, is active in two charitable causes: Ullmark's Barks, which, in conjunction with the SPCA in Erie County, has helped six dogs find owners in two months, and AjaBajaCancer, a foundation in Sweden that helps families affected by childhood cancer.

"I would say I'm quirky, unique," Ullmark said, unabashedly, in KeyBank Center following practice last week. "I would rather be unique than normal. That’s how I see it. I don’t have any issues with me being me and people seeing me as quirky or fun or whatever they say. I try to be me every day, every week. Try to enjoy life as much as possible."

Those personality traits are on powerful display during Ullmark's postgame comments to reporters. He never seems interested in delivering the soundbite they desire, nor does he want to be drawn into a discussion about the meaning of wins or losses. Though his strategy can be maddening – "I didn't hide the cookies well enough" is among his best work – his interactions with fans and teammates reveal more about the man behind the mask.

Ullmark is hyper-focused when preparing for games and he holds himself to an elite standard, admittedly to a fault at times. But he also can come off as carefree, preferring to savor the moment rather than looking ahead or dwelling on the past. 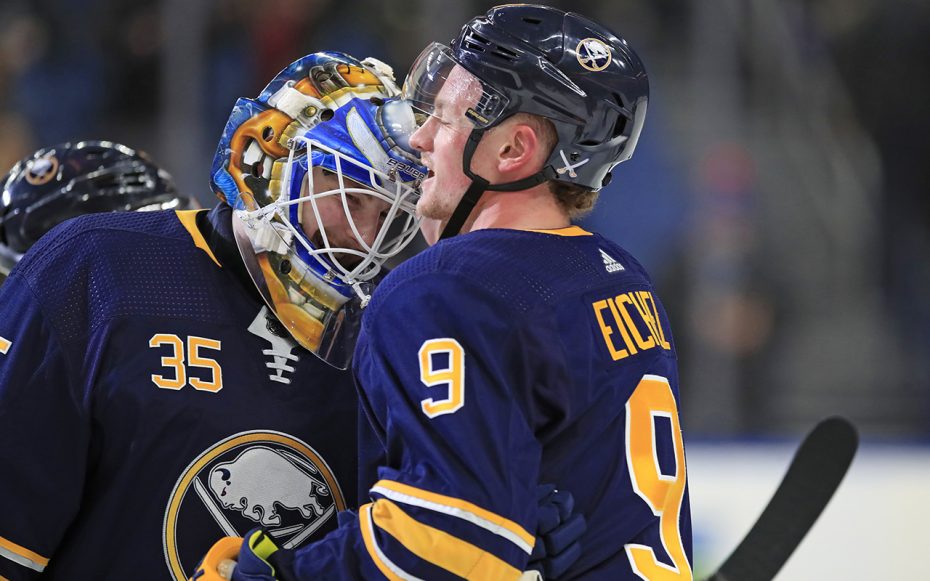 As a child in Sweden, Ullmark used to arrive home from hockey practice to his mother asking when his team was holding another on-ice session at the rink. He rarely knew the answer, telling his mom to ask the coach. Ullmark was never worried about such details.

Goalies have long been known for their eccentricities, but Hutton said there's more than one way to approach what is arguably the sport's most pressure-packed position.

"He’s quirky, more like your old-school goalies," Hutton said. "He has some odd things that he does. He’s just kind of a goofball and, all in all, a good person. ... He’s not your typical hockey player, in the sense that most of these younger guys run around for a while and they’re a little more reckless. He’s a family man, an all-around good kid."

Adam Wilcox, the backup goalie for Rochester the past two seasons, incorrectly expected Ullmark to be quiet when the two first crossed paths in 2015. Wilcox, who faced the Amerks as a member of the Syracuse Crunch, did not learn until last season that Ullmark seems to always be smiling and rarely stops talking.

During Ullmark's starts with the Amerks last season, he often would crack a joke during television timeouts and kept the mood light with his random, unfiltered comments. When the two first met, Ullmark jokingly brought up how Wilcox struggled against Rochester in recent years.

"I loved playing with him," Wilcox said of Ullmark. "He's a great goalie partner to have off the ice. Whether he has allowed seven goals or has a shutout, he's always the same. He'll talk to anyone, and he's always in a good mood. Obviously, he's a goofball, but he's also a super nice guy. Linus will do anything for anyone."

His endearing personality can help brighten spirits during the rigorous regular season, Ullmark's teammates said. It's not a comedic act, either. He and his wife, Moa, each wore one of his goalie helmets during a picture on their wedding day.

Just to clarify things. We didn't wear my masks during our ceremony. We used them afterwards 4 our wedding pictures. https://t.co/LD9STBpoAl

Even the most relaxed goalies can fall into the habit of becoming too serious. Ullmark learned that through difficult times. A sixth-round draft pick of the Sabres in 2012, he went a combined 36-43-2 in his first two seasons with the Amerks. His final two seasons in the Swedish Hockey League didn't go as planned, either.

Ullmark had a .931 save percentage in 31 games for Modo in 2013-14, only to post a 12-20 record the following season. He was an All-Star last season for Rochester, helping the Amerks snap a three-year postseason drought.

However, on the eve of the Calder Cup playoffs in April, he received news that his grandmother, Ruth, had died. That is when Ullmark learned it's OK not to hide behind a smile. He discussed his options with Amerks coach Chris Taylor: return home to Sweden or remain with the team.

In the end, Ullmark stayed, and he blamed himself for the result after allowing 16 goals in a three-game sweep against Syracuse.

"Obviously, that was a tough situation at that point," Taylor recalled. "You respect the hell out of a guy who does that. His character has never been in question with me. I know him as a guy in the room that all he cares about is wherever he puts that sweater on he’s for that team. That’s the way he played for us last year."

Ullmark's personal loss was not revealed until the Sabres released a video this season in which he spoke of the playoff defeat. Rather than suppressing his sadness, Ullmark said, he wishes now that he had expressed his emotions and made more time for family. He realized the value of such introspection last offseason, he said, when former Sabres teammate Robin Lehner spoke publicly about seeking counseling for mental health and addiction. Lehner is having a breakout season with the New York Islanders.

"You want to use hockey as a sanctuary, so you come here and don’t think about that stuff," Ullmark said. "But if it starts affecting your game, you should really start talking about it. I don’t know how many guys in this league that keep things to themselves that might be good to talk about. I’m very happy about Robin that he’s talked about his struggles; he took care of himself and he’s playing tremendously now. He’s in a good place. You see whenever there’s a person who might be struggling, they might be struggling in their life. They might be doing all the right stuff on the ice, but just because they’re struggling off the ice, there might be that tension."

Ullmark, the father of an 11-month-old boy, is happy again and has proven more than capable of playing in the NHL. Among Sabres goalies through their first 50 starts with the team, Ullmark's .914 save percentage ranks first in franchise history.

During his time in Rochester, Ullmark used to bring his two corgis, Barry and Bob, to the rink to play with teammates – a welcome sight during the always-tense days of minor leaguers – and always seemed to know how to make others feel better following a difficult game.

That has continued in Buffalo. Ullmark hosted Sabres defenseman Casey Nelson for Thanksgiving and had six young fellow Swedish teammates to his home for tacos during training camp in September.

The Americans says you eat tacos on Tuesdays but for the Swedes, it will always be on Fridays! 🌮😋

"He’s a great guy and always happy," said Rochester winger Victor Olofsson, a teammate of Ullmark's with Modo who attended Taco Friday. "Brings a smile to the rink every day. He likes to talk with everyone about everything. ... He tries to take care of everyone."

Ullmark has always had an interest in helping others and his arrival as a full-time NHL player finally gave him the avenue to make a difference. When the Sabres' community relations staff asked players to think of possible charitable causes to get involved with this season, Ullmark immediately thought of dogs.

When he wasn't chasing the family dogs as a child, Ullmark was "all up in the faces" of ones he encountered on the street. He also called his two corgis the "best companions" and wanted to help dogs who could not find a home. As part of Ullmark's Barks, Ullmark posts a picture of his latest "draft pick" available for adoption and expresses joy on Twitter when the SPCA serving Erie County posts a photo of the pet with its new owners.

Whether he is using his platforms to make a difference in the two places he calls home or eliciting laughs inside the Sabres' dressing room, the man whose expression is often hidden behind a Minions-emblazoned mask finds joy in watching others smile.

"It’s the satisfaction you get from seeing people smile," Ullmark said, beaming. "You know you made their day, week, month or year. It’s not about praise or anything like that. People might think it is, but it’s more about seeing the actual reaction from the person that you’re trying to help."

Never miss a story. Sign up today for a 30-day free trial to BuffaloNews.com.