This is a free fishing weekend in New York State. No fishing license is required, but you have to abide by state fishing regulations and the body of water you may be fishing. Good luck.

Not much to report this week. The key is to locate open water in the streams. Once you do, you can catch trout. A few catches of the week gallery fish came from Erie tribs, but you do have to work for them. There have been quite a few ice fishermen on Buffalo Harbor with a mix of reports.

Fishing has been very good in the lower stretch of the Niagara River … if you can get out. Strong southwest winds last week filled the river with ice and made for some tough access for boaters. But by the weekend, they were back out there hitting steelhead, brown trout, lake trout and walleyes. Capt. John DeLorenzo of Niagara Falls hit the river Monday and his customers had an excellent day, catching double-digit steelhead on pink and chartreuse egg sacs fished off three-way rigs throughout the river. All the drifts had fish on them. They even caught some incidental bonus walleye on egg sacs. 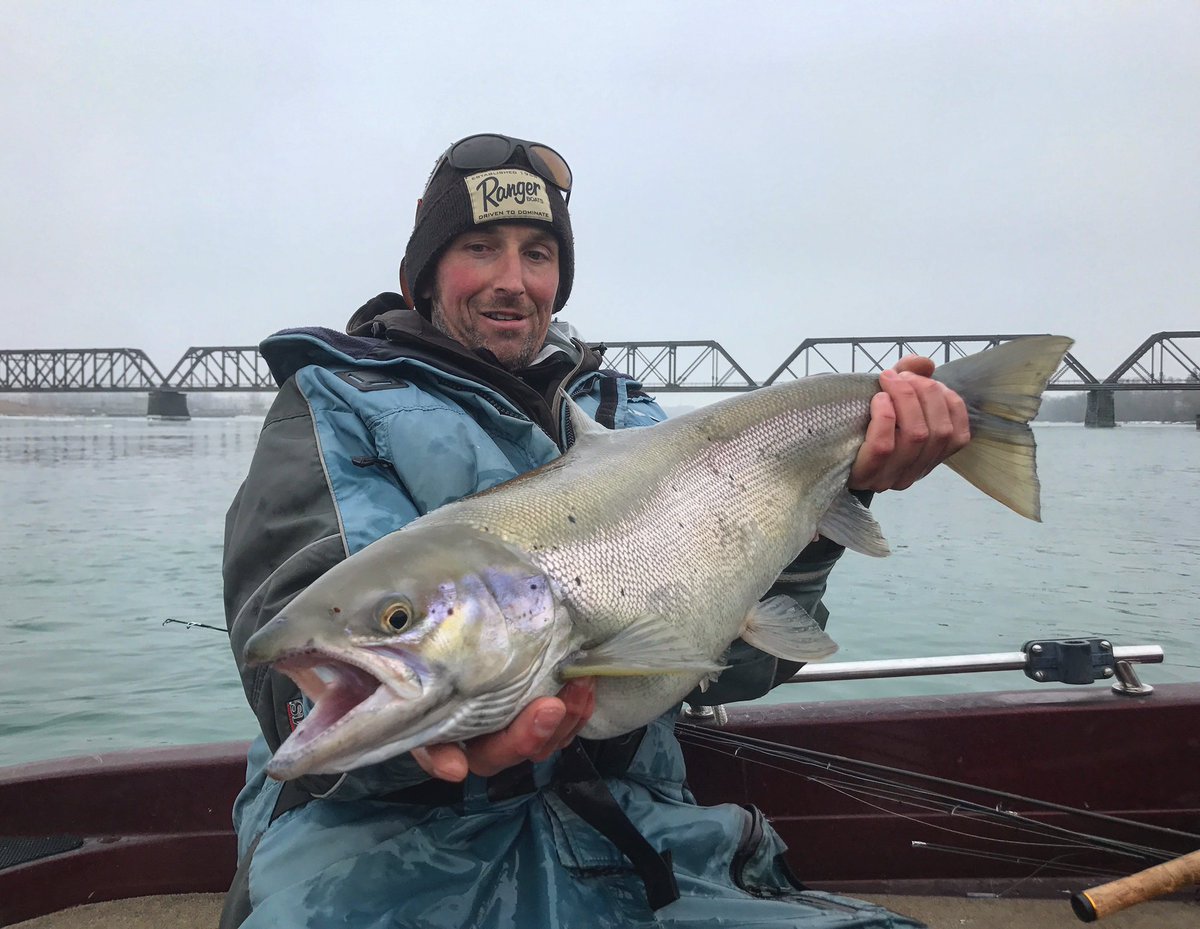 Denis Kreze of Fort Erie was fishing the upper Niagara River this week and caught this huge Atlantic salmon in the Thompson's Hole area. (Courtesy photo)

Downriver, minnows did the trick on brown trout. With more wind in the forecast at midweek, ice could pose a problem. If the upper river fills with ice again, there’s a good chance it will end up in the lower section. Don’t get caught in your boat too far away from the launch ramp if ice returns. The Roger Tobey Memorial steelhead contest is on the calendar for March 2, sunrise to 2 p.m. out of Lewiston Landing. Register at the launch the morning of the event at Creek Road Bait and Tackle in Lewiston or the Slippery Sinker in Olcott. Call Paul Jackson at 998-8910 for more information. You must be a member.

There is some shore fishing in the gorge but caution is advised. Jigs and spinners were working for Mike Rzucidlo of Niagara Falls. In the Upper Niagara River, there wasn’t too much to report, although Denis Kreze of Fort Erie, Ont., has caught some bomber fish in the Thompson’s Hole area. This week it was a huge Atlantic salmon. The Thompson’s Hole area also produced some limit catches of walleye. Remember that walleye limits are different in the upper and lower sections. In the lower river, the walleye limit is one fish per person with an 18-inch minimum size. Walleye season closes on March 15 in New York.

There were a few trout being caught this past week on the tributaries where water was ice-free according to local guide Scott Feltrinelli of Ontario Fly Outfitters. Most of the action was on Oak Orchard River due to its warmer water from the dam as a tailwater fishery. All the smaller streams and non-tailwaters were frozen. The Oak has high flows with about 1 to 2 feet of visibility as of Tuesday, according to Ron Bierstine with Oak Orchard Tackle and Lodge. There is a mix of old and fresh steelhead available in the river. To the east, the yellow perch fishing continues to be very good in Sodus Bay through the ice. Many of the fish are 10 to 12 inches long.

Fishing at Chautauqua Lake last weekend was very good for perch and walleyes, according to Skip Bianco at Hogan’s Hut. After the recent warmup, the lake has healed again. The lake level has dropped a foot and ice has recovered rather well. Anglers should to stay away from Dewittville and Prendergast creeks because a couple of anglers have fallen in at these spots. The best perch fishing is Mayville in the weed beds and some perch are being caught at 35 feet of water. Mornings and evenings have been best for walleyes on the weed line. During daytime, the best fishing for walleyes has been in 25-40 feet of water. Rapalas are the best thing going, with a shiny finish.

Chautauqua Reel Outdoors has been running a fishing tournament since the beginning of the month. The tournament runs until Feb. 28. There have been several fish entered so far with the heaviest walleye being 7.35 pounds, caught by Travis Higgs of Jamestown. Most are fishing the north basin from 15- to 35-foot depths, according Mike Sperry. Jigging Rapalas and Thundermist jigging spoons have been the most consistent lures. Rich Davenport of Tonawanda reports that the ice is sound at 8 to 9 inches. Perch are starting to school, but sizes still run small. The walleye bite has been hot, early and late, at places like Long Point, Bell Tower/Institute, Mission Meadows, Dewittville and Prendergast.

Action seems to be in the 20- to 25-foot range for ’eyes, with fish hitting minnows and Rapalas in No. 5-No. 9, all worked off the bottom. Best colors have been blue and silver as well as red and silver, tipped with minnows or clean. Half-ounce Silver Buddy blades also work well. The lake lost 30 percent of its ice during the warm spell, according to Davenport, but as of Sunday, the shore was again hard, with no slush on the surface, and no snow. That could change with the weather this week. Bring the ice skates, unless the weather messes that up.

John Van Hoff of North Tonawanda and Kevin Gunther of Niagara Falls hit Silver Lake last weekend and they managed to catch their limit of yellow perch. They were drilling through 10 inches of ice and all of their fish were 9 to 10 inches in length.