This is the second of a two-part series analyzing the ins and outs of Bills quarterback Josh Allen's completions in his rookie season.

The Buffalo Bills’ quarterback completed 56.3 percent of his passes in his senior year at the University of Wyoming.

If you break down his completion rates to each area of the field – short, middle, deep, left, middle and right – there’s not a dramatic difference between his senior college season and his rookie pro season. His deep completion rate was .262 at Wyoming, compared with .286 in the NFL. The rate within 10 yards of the line of scrimmage was .667 at Wyoming and .704 this season. The simple bottom line: He needs to improve. 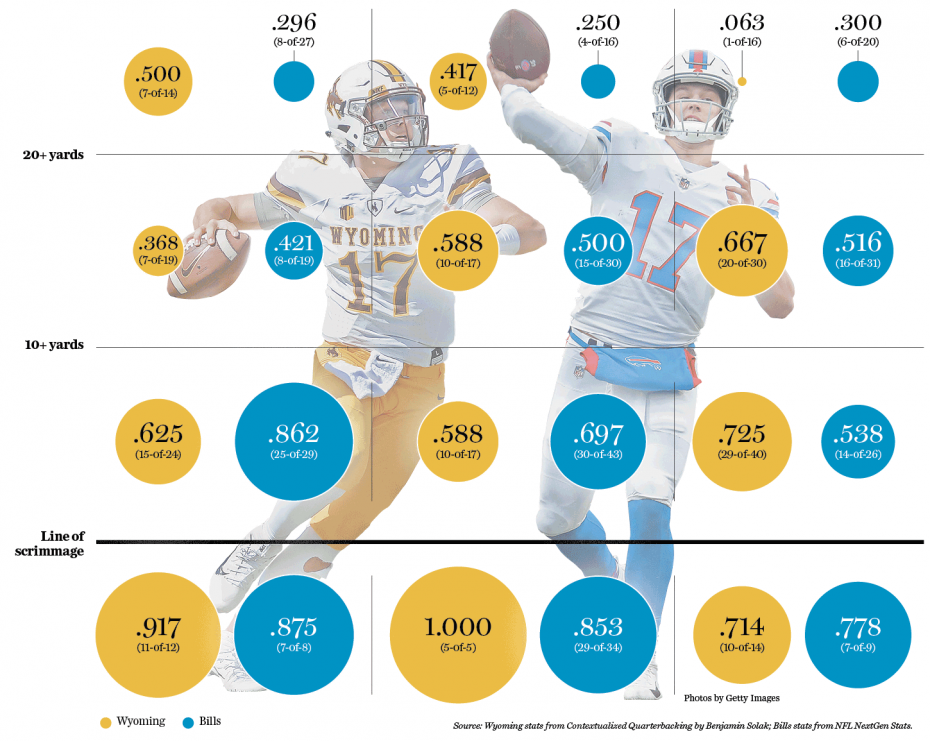 There are so many factors that impact completion percentage that it’s risky to draw too many conclusions from comparing his last college season and his first Bills campaign. For instance, if Allen completed three more back-shoulder fades to the left to underachieving wideout Kelvin Benjamin – a timing throw that requires experience and synchronization with the receiver – then his rate to that area goes from 42 percent to 58 percent.

The quality of his receiving corps and offensive line play with the Bills in 2018 was below par. And as the Bills and Allen have acknowledged, he must continue to work to improve his footwork and throwing mechanics.

Yet, Allen did hit some sharp, tight-window, intermediate passes during the season, in which he showed good mechanics.

Jim Kubiak, the former pro quarterback and head of the Western New York Quarterbacking Academy, sees reason for some optimism.

“Yes, he did improve as the season went on this year, which tells me he is working on these things,” said Kubiak, who also analyzes the Bills' quarterbacks for The News. “If he understands the footwork, placement and the technique he is striving for he can definitely achieve better consistency and accuracy.”

Jim Kubiak: What are Josh Allen's next steps to becoming a championship QB?

The Bills tried to take advantage of Allen’s big arm. They attempted the second most throws of 20-or-more yards downfield (89) of any team in the NFL, according to ESPN’s "NFL Matchup" show. Only Green Bay (92) had more.

Allen’s 18 deep completions ranked 13th in the NFL per games played, according to Pro Football Focus. Factoring in drops and throwaways, Allen’s deep completion percentage (36.5) was 26th among the 32 NFL starting QBs.

“One impression I get from this year’s numbers down the field is he’s not very good at getting the ball up early and into the right location for those guys to make plays down the field,” Kubiak said. “He’s what I would call a sight thrower. All that really means is he’s a guy with such a strong arm that he’s always waited for them to be open and then just lasered it to them.

“In the NFL, the ball needs to be up and over that imaginary rim that sits on the players' helmets. It’s hard to develop that when everyone is fast, everyone is good. As the ball travels down the field, these defenders are reacting to the ball just like the offensive guys. If you throw it too low, it’s going to be picked.”

The Bills’ offense overall needs to get better in the short passing game. Allen averaged the fewest short completions per game (10.1) of any starting QB.

Yet Kubiak thinks offensive coordinator Brian Daboll did well to compensating for the struggling running game with some short passing.

“I thought Brian Daboll did an awesome job of taking some of the pressure off the running game with some short throws,” Kubiak said. “It was like a modified running game. That was a lot in that middle section – 29 of 34.