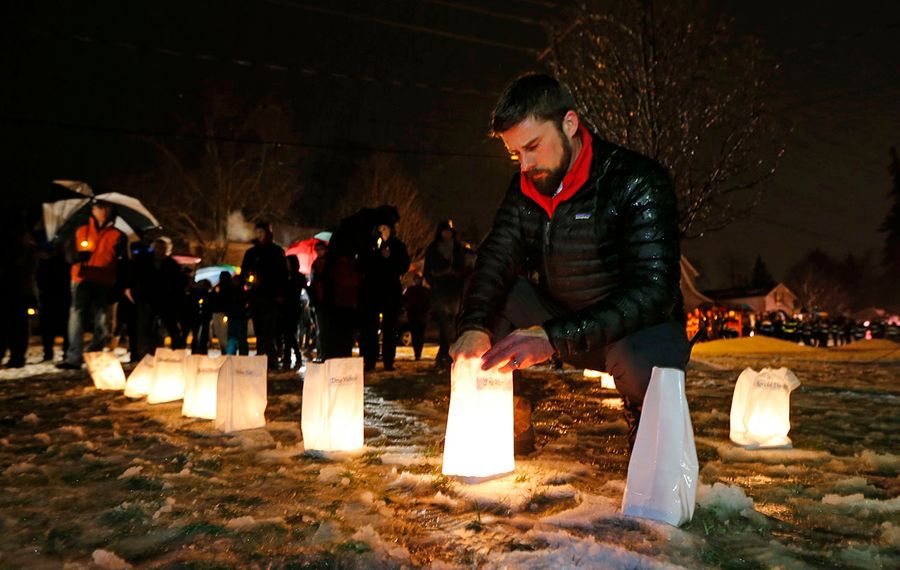 When the prayers and speeches finally ended, the Families of Continental Flight 3407 gathered Tuesday in a frigid rain, on a night as bleak and wintry as the one 10 years earlier when their loved ones lost their lives.

Once again, as they have on several previous crash anniversaries, they lit electric candles and marched away from Zion Lutheran Church in Clarence toward the site of a plane crash that never should have happened. There, once again, they read the names of 50 people and one unborn child who should not have been lost.

But this anniversary, the 10th, was different. This time, the prayers and speeches focused not just on lives lost, but also on lives saved.

That’s just what the families did. They saved lives by forcing Congress into passing landmark aviation safety legislation in 2010, said Jeff Skiles, the copilot of the legendary “Miracle on the Hudson” US Airways flight that landed safely on the river after a bird strike.

“There are dozens, even hundreds of people going about their productive daily lives who are alive today because of the work you have done,” Skiles told the families at the church service that preceded the walk.

That was a recurring theme both at the church service and at the earlier rededication of the Flight 3407 Memorial at the Clarence Public Library on Tuesday.

More than a thousand people died in U.S. commercial plane crashes in the two decades preceding the Flight 3407 crash. But since then, only one person has died on a U.S. airline mishap.

That’s why Deborah Hersman, who served as chairwoman of the National Transportation Safety Board at the time of the crash, read a letter at the church service from the current chairman, Robert Sumwalt.

“As a result of your loss, so many people have gained,” Sumwalt said.

Both Sumwalt and Hersman noted that several other crashes happened before Flight 3407 for similar reasons. But when the Flight 3407 families learned that the plane bearing their loved ones crashed because of pilot error – and that the plane’s pilots were poorly trained and fatigued – the families accomplished what others did not.

“A small group of determined people rebalanced the scales of safety for the rest of us,” Hersman said. 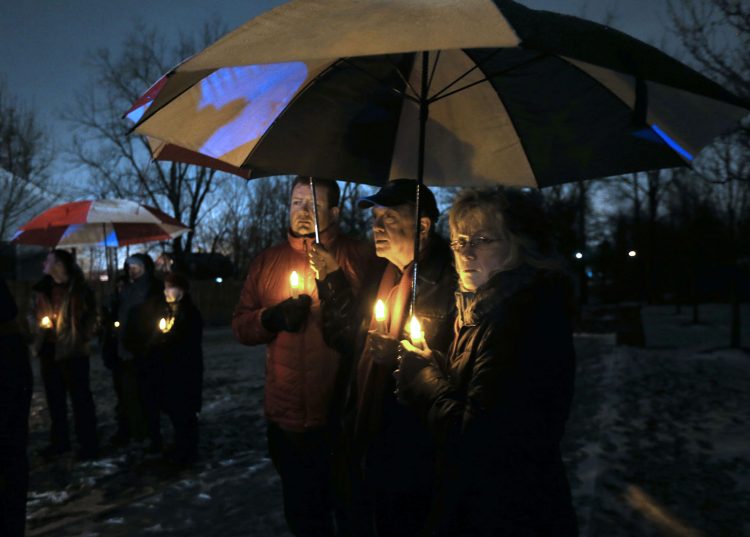 Hersman, who worked closely with the families throughout the investigation and afterward, grew emotional as she marveled at how the families came together to force change.

“This investigation and my association with you is the highlight of my life, personally and professionally,” she said.

Flight 3407 family members hardly spoke at all at the church service, taking, as they have for years, something of a quiet pride in their accomplishments.

In many ways, they are more focused on the loved ones they lost, who were honored again with the rededication of the Flight 3407 Memorial at the Clarence library.

There, Karen Wielinski – who lost her husband, Doug, when Flight 3407 crashed into their Long Street home – noted that the memorial is symbolic, in that it also shows, among other things, a flock of birds soaring toward the heavens.

"I've often said that I've received comfort knowing that my one on the ground, Doug, left this life in the company of so many talented, kind and loving people on Flight 3407," Wielinski said. "I envision them rising from the wreckage together, just as birds soar up through the sky as shown on the kiosk."

The centerpiece of the memorial is a four-sided kiosk. One side includes a screen where visitors can scan through short biographies of each crash victim. Another side shows portraits of the lost. Another side includes a glass case displaying uniforms firefighters wore the night of the crash. And another side tells how the families persuaded Congress to write that new aviation safety law.

"We wanted the public to know and understand that from this tragedy, hope and change could grow," said Doug Kohler, the Clarence town historian. 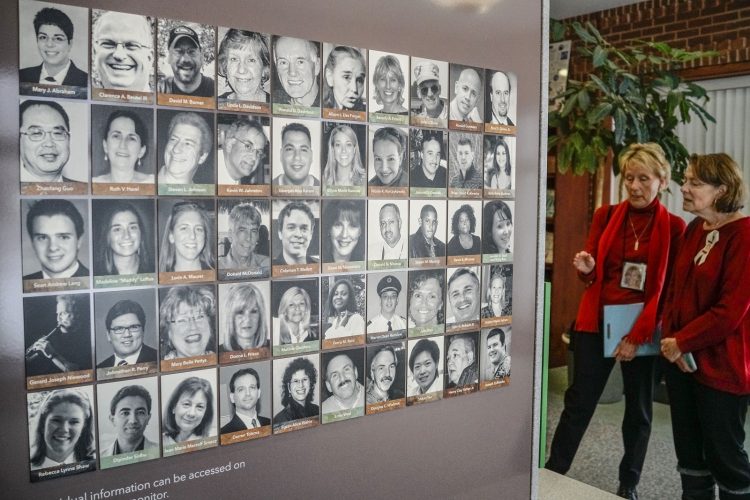 Photographs of all 50 victims adorn one side of the Flight 3407 Memorial at the Clarence Public Library, which was rededicated during a ceremony Tuesday. (Derek Gee/Buffalo News)

Family members said they loved the memorial, which also features a pond surrounded by bricks bearing the names of the crash victims and an arboretum with 51 trees: one for each of the dead.

"They went into such detail," said Dan Marzolf of Orchard Park, whose sister, Jean Marzolf Srnecz, died in the crash. "They put everyone's story in it. It's all here."

The rededication drew some surprise guests – most notably Larry Pogorzala of Arcade, one of the two air traffic controllers on duty the night of the crash.

Pogorzala and his partner were working that night to bring Flight 3407 in for a safe landing.

"But then I looked at the radar, and it was gone," Pogorzala recalled.

A Continental Airlines official soon called to get information on the flight – and when the controllers said they had none, a voice on Continental's end of the line broke out crying.

"You want to hear something, anything. Who knows? You just don't know," he said.

All the while on the control tower voice recorder, Pogorzala remained the calm, in-control voice.

Several Flight 3407 family members remembered his steady voice on that air traffic control tape and went up to thank him Tuesday.

Get the power of Western New York’s largest newsroom every day. Sign up today for a 30-day free trial to BuffaloNews.com.

Along with that surprise guest, the rededication featured a surprise recollection from Michael Powers, the Clarence town justice and town attorney who led the nonprofit that built the memorial.

Powers, who lives near the crash site, recalled lying in bed on the night of the crash and hearing the roaring sound of a plane in trouble. He recalled waking up his 14-year-old nephew, Daniel, whom he planned to take snowboarding the next day. He remembered rushing off to Clarence Town Hall that night to answer the panicked phone calls of people seeking answers about their loved ones. He recalled Daniel sitting and watching and waiting as his uncle worked through the night.

Ten years later, Powers marveled at the new era of aviation safety and the Flight 3407 families’ part in it.

"To move anything in Washington is Herculean," he said. "To do what you have done almost defies imagination."

So does what happened to Daniel Powers, that little boy who never got to go snowboarding on Feb. 13, 2009.

"Last week, he started his pilot training at Republic Airline," Powers said of his nephew.

Looking out at several dozen red-clad members of the families group, Powers said, "What you guys did will hopefully keep him alive."