The Buffalo National Weather Service has issued a winter weather advisory for all Western New York by 3 a.m. Tuesday through 10 p.m. Tuesday. It hasn’t gone with the higher designations of winter storm watch or warning because it is constrained by its consistent criteria. It generally needs an expectation of 7 inches of accumulated snow in a 12-hour period to meet the standard of continuity in our region.

Continuity is a good thing. However, I’m not convinced “winter weather advisory” is enough of an attention grabber for the kind of storm I’m anticipating and its impact on the public. So as a private-sector meteorologist, I’ve decided to unofficially call this a "messy winter storm." It doesn’t look like we’ll reach that 7-inch criteria (though it’s not out of the question), because the snow will change to ice pellets/sleet after coming down at a good clip for several hours. Warmer air will be moving in aloft, making the subfreezing layer more and more shallow as the day progresses. Then, we have the always-difficult call as to whether the subfreezing air gets so shallow that rain in the warm air above doesn’t freeze until it hits the surface. Freezing rain is the most treacherous of precipitation types because it is both the most slippery, and because it can produce a weighty glaze on tree limbs and power lines.

For a short refresher on the forecasting of winter precipitation types, I wrote this article last December: The ice man cometh to WNY.

Most meteorologists don’t like to throw their fate to a single computer model, but this high-resolution model (which runs every six hours) has been very consistent for at least six consecutive runs. Unfortunately, I have high confidence the morning commute will grow worse as it goes along, and conditions will get even worse later in the morning. Here is the model depiction for 7 a.m.: 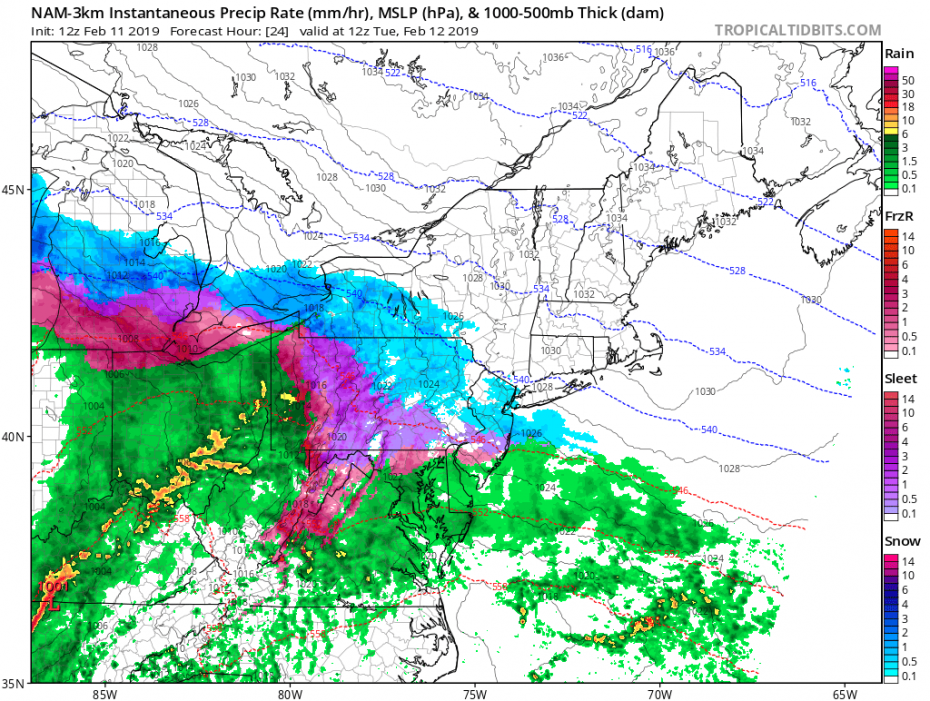 The snow will begin to pick up the accumulating pace, advancing to the north. So, if you have a 6 a.m. commute, you’ll probably be dealing with lighter snow. Snow is blue on this graphic, purple depicts sleet, and red may be freezing rain.

By mid-morning, the snow is depicted to have changed to sleet from Buffalo southward, with widespread snow to the north, darker blue indicating heavier snowfall rates: 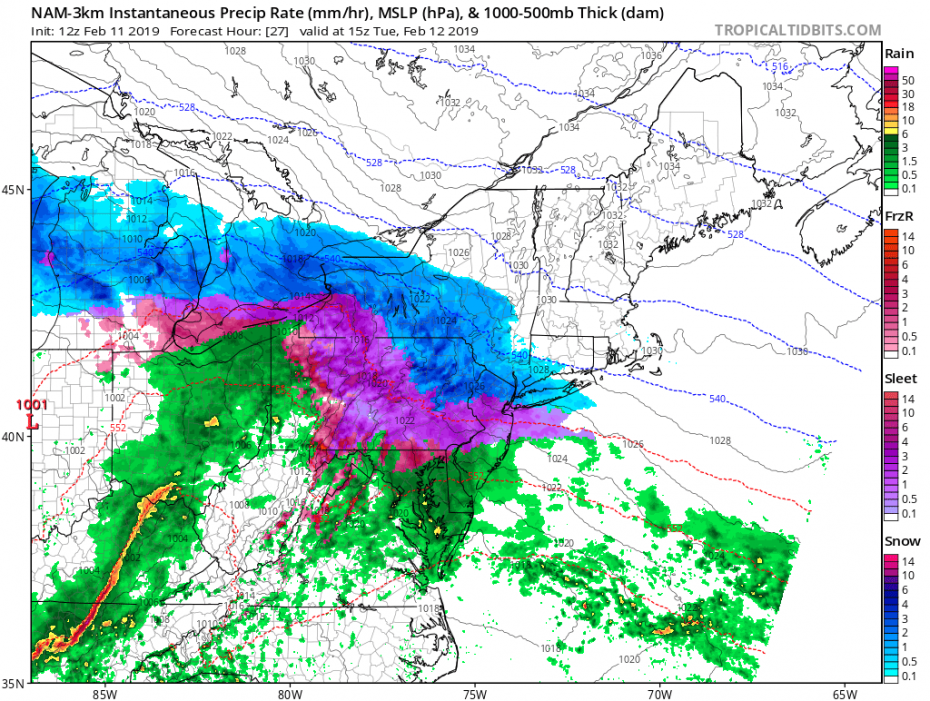 Toward late afternoon, this model and others are forecasting above-freezing temperatures to have reached the surface near Buffalo and closer to Lake Erie. But note how stubborn the sleet and possible freezing rain remains just to the north and east. It is very tough to gauge how the evening commute will be shaping up in the metro area, but it looks quite nasty north, northeast and east of the metro area: 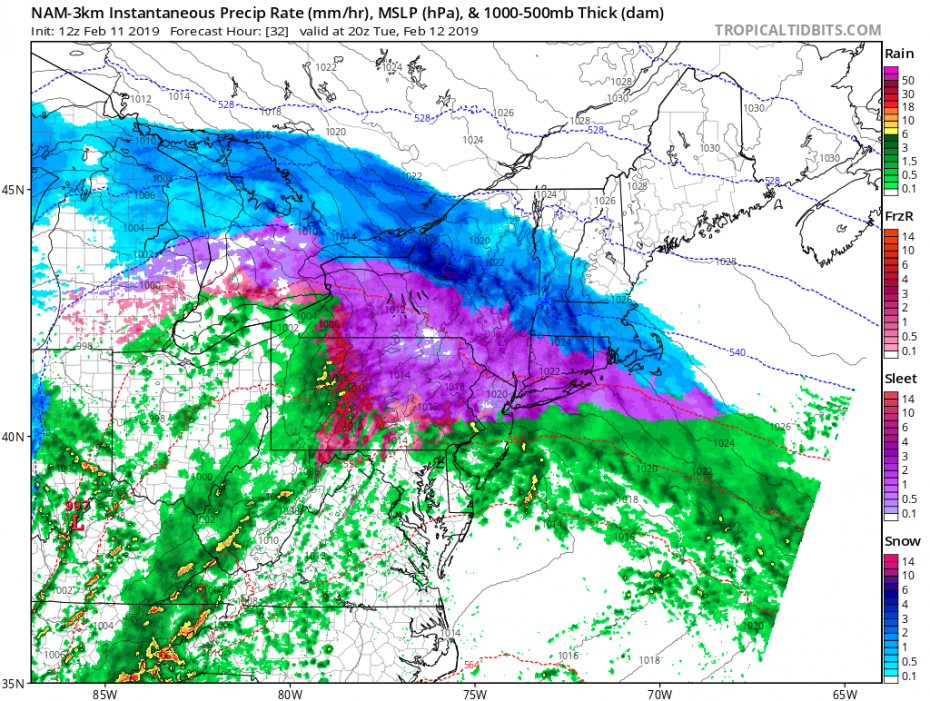 The rate of precipitation diminishes by the end of the day and early evening, so road conditions should begin to improve by 7 p.m.: 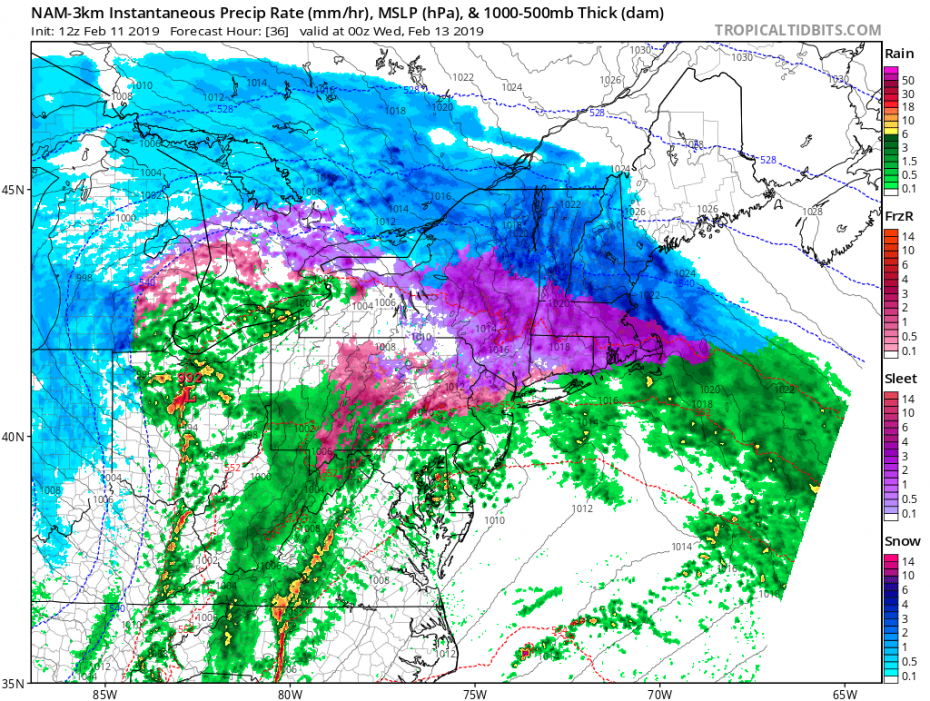 If you look at the center of low pressure over northern Ohio, you see the number 992, and if you squint you can see the isobars – lines of equal barometric pressure – wrapped around the low. This will be a vigorous, intensifying storm system. That means gusty winds will accompany the snow and icy mix. This and other models are projecting winds to veer from easterly to southeasterly. If that veering occurred uniformly across all of Western New York, confidence would be great of a change from an icy mix to just rain. However, pattern recognition tells me in situations like this, winds to the north of Buffalo can be very slow to veer to a warmer southeast direction. The wind acceleration that occurs over smooth Lake Ontario in an easterly flow can delay or prevent that veering over part of the region. That can keep the subfreezing layer just thick enough to maintain the icy mix to the north and east, while areas close to Lake Erie switch over to rain and melting. Subfreezing air can also stubbornly stay in place in interior valleys, prolonging the mess.

The tendency for the cold air to remain thicker and stay longer to the east, northeast and north even is evident in the National Weather Service's estimate for the highest probabilities for greater than 4-inch snow accumulation:

Speaking of snow, here is the NWS Buffalo estimate of accumulations as of Monday morning: 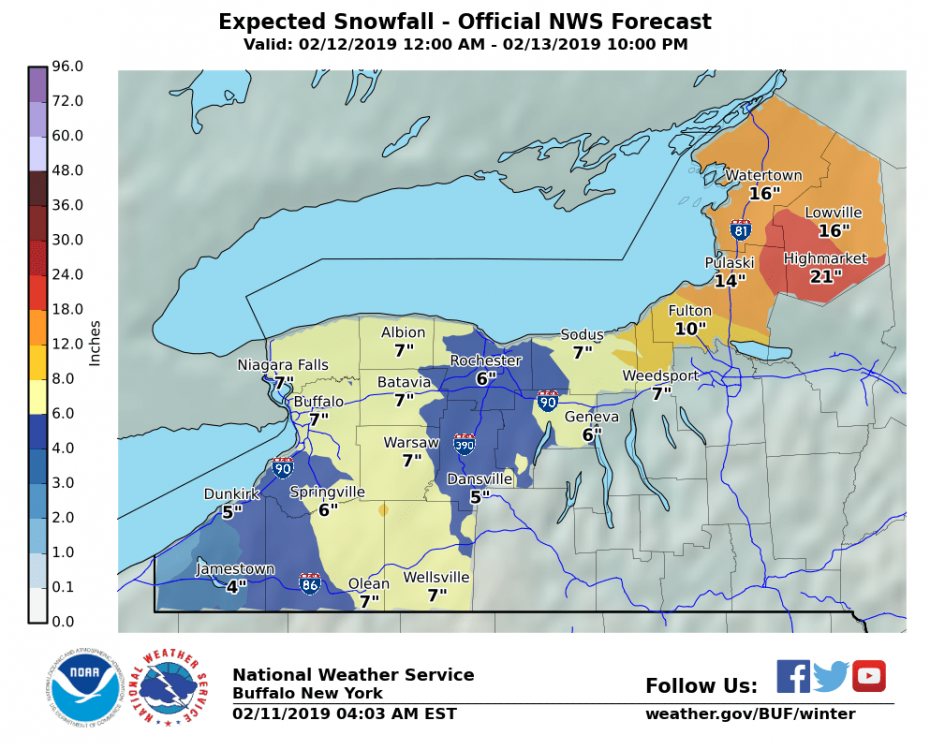 This estimate includes less impactful wraparound snow showers behind the storm on Wednesday. Tuesday’s general range of snow prior to the change to sleet should be on the order of 3 to 6 inches with highest amounts to the east, northeast and north of Buffalo, and the lowest closer to Lake Erie to the southwest. East winds of 15-30 mph will produce blowing snow during the morning, and winds will be markedly stronger closer to Lake Ontario. These gusty winds pushing from east to west will destabilize the ice cover on Lake Erie and may produce some unpredictable openings for limited lake snow on Wednesday. Whatever snow falls as the storm pulls away will be blowing horizontally. Strong southwest winds toward Wednesday morning may gust to around 55 mph, with winds veering to more westerly during the day. That would take any limited lake snow and send it to the hilly terrain south of the metro area.

My bottom line advice: Even though this storm will not officially qualify as an official winter storm due to snow accumulation coming in just under the criteria, you should treat it as a winter storm because of its overall impact on travel in the region. I’ll stick with "messy winter storm" and keep it unofficial. In any case, it will be a bonafide nasty system.