Jennifer Page says she removed her father from an East Aurora nursing home because of mistreatment. Dorothy Carlone says the care her mother receives there is better than she could have imagined.

The experiences of these two women with elderly parents at Absolut at Aurora Park could not be more opposite.

Page has set up an online petition and is organizing a protest Saturday, Feb. 9, that she hopes will pressure state officials to close the for-profit nursing home, which has an overall rating of “below average” from the federal government.

“I had to do something for the victims who are still stuck there,” said Page.

In contrast, Carlone recommends the nursing home to anyone.

“The nurses are wonderful. The in-house doctor is the best elder care doctor I have ever met. Everything has been perfect from Day One,” Carlone said. 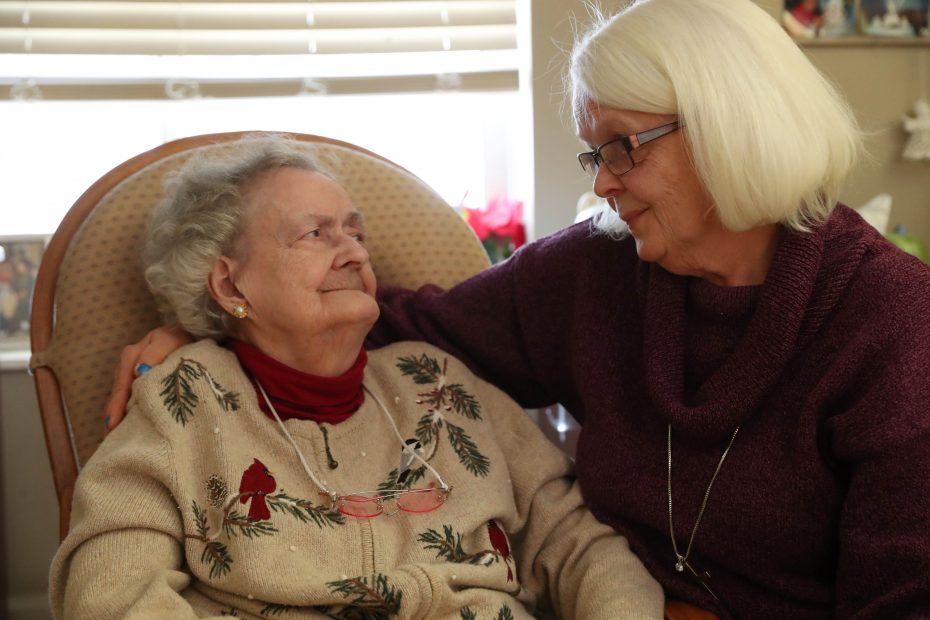 Dorothy Carlone visits her mother, Maxine, 90, a resident at Absolut Care of Aurora Park nursing home in East Aurora. Carlone said the nursing home has provided tremendous care to her mother, who previously was in a Pennsylvania nursing home. (Sharon Cantillon/Buffalo News)

Both women contacted The Buffalo News earlier this month after reading a story that reported the East Aurora nursing home was one of the lowest-rated in Erie and Niagara counties for four consecutive years and among the lowest-rated in New York. The story found:

• Registered nurses spend on average 24 minutes per day with each resident at Absolut at Aurora Park, 17 minutes less than the state average, according to data issued Jan. 30 by the federal Centers for Medicare and Medicaid Services. Registered nurses at only six of the 47 nursing homes in Erie and Niagara counties spend less time per day with residents.

• Absolut at Aurora Park has been fined $39,210 in the last four years for violations, including a citation for “actual harm” to two residents who did not receive proper treatment for bedsores. The state Health Department also cited the home for failing to provide adequate supervision and an accident-free environment after resident Arturo Bucci toppled in his wheelchair more than 12 feet down a creek embankment and died.

• Absolut at Aurora Park agreed to pay $820,000 to settle four lawsuits in 2017, according to State Supreme Court records. That was the highest amount that The Buffalo News could document among the local nursing homes. Most settlements are sealed from public view.

The facility was among the first of 16 nursing homes in the two counties that were sold to out-of-town investors in the last 11 years. A Buffalo News investigation found most of the 16 nursing homes were rated lower than most locally owned facilities by the Centers for Medicare and Medicaid Services.

Absolut at Aurora Park, a 320-bed home, stood out because of its long history of problems dating back decades before it was sold in 2007 to an out-of-town owner.

A spokesman for the nursing home has said its owner is committed to improving conditions, including increased evaluations to prevent bedsores and offering bonuses to staff. In recent months, the Centers for Medicare and Medicaid upgraded the nursing home’s overall rating from a one-star ranking of “much below average” to two stars, “below average,” in the five-star ranking system.

In a Jan. 4 email to The News, Carlone said her mother had an entirely different experience at Absolut at Aurora Park than those who have been unhappy with care there.

“In just six days, she is a different person, happy, smiling and eating her meals,” Carlone wrote of her 90-year-old mother’s transfer from a Pittsburgh nursing home to the facility in East Aurora. Carlone, a Wales resident, said her mother, Maxine, who has early dementia, had a bad experience in the other nursing home.

At Aurora Park, Carlone says her mother regularly receives physical therapy, participates in group exercise activities and, thanks to a haircut and restyling, sports a new look.

“I have dropped in every day just to be sure she is okay and I usually have to hunt for her because she is off doing some activity,” Carlone said. “Her room is beautiful, spacious, bright and cheerful.”

She says her assessment of the nursing home is based not only on the poor care her mother received in Pittsburgh, but compared to other local facilities that cared for her father before he died two years ago.

A day after Carlone emailed The News, Page sent an email outlining the mistreatment she says her 75-year-old father experienced.

Joseph Clark, she said, was admitted to the facility Oct. 31 for rehabilitation following a hospital stay for a urinary tract infection.

When Page and Clark would FaceTime on their smartphones, the daughter said he complained that a water pitcher beside his bed was empty.

“He’d hit it up and down. I could hear it was empty,” Page said. “On Christmas Eve, we brought a giant container of water with a spigot on it and put it next to his bed. I said, ‘You have water now.’ ”

His problems started in the nursing home’s rehabilitation unit, where Clark developed a bedsore on his buttocks, Page said.

“He’d call and say, ‘No one put cream on me.’  I’d have to call the nursing supervisor and ask, ‘Am I going to have to drive there and put cream on my father’s bum?’ I live on the West Side of Buffalo. Then they’d comply and do it,” she said.

On Dec. 26, Page said she and her father reached their breaking point.

“When my seven-year-old daughter and I walked in about 6 p.m. to visit my father, he was in his wheelchair and naked from the waste down with no blanket. He was shaking,” Page said. His hands and the wheelchair were soiled with feces, she said, explaining that her father had incontinence issues.

Page said she requested an ambulance so that her father, a Vietnam War era veteran, could be taken to the Veterans Affairs Medical Center  in Buffalo.

“We were warned by the nursing director that if they discharged him, it’s up to me bring him back. That’s when I informed her that we will never be coming back. I had to fight every day for basic human needs to be met,” Page said.

After two days at the VA hospital, Clark was discharged and is now at his home. He receives assistance from a health care aide, according to the daughter.

Page filed two complaints about Absolut at Aurora Park on behalf of her father with the state Health Department.

On Wednesday, she said, a Health Department investigator told her in a phone call that the complaints were determined to be unfounded because of a lack of evidence.

"I have photos and recordings of what the nursing home staff was saying to me and my father, but the state investigator said she could not use them," Page said. "What a flawed system."

An Absolut official declined to comment on Page’s complaints because of privacy concerns but said the company will look into them.

“It is our expectation that, like the Carlone family, all families have a positive experience with us and we regret to hear when any families are not fully satisfied with the care, treatment or services rendered to a resident at our facility,” said Chris Luterek, Absolut’s vice president for business development.

Absolut, which is operated by a for-profit company owned in part by Israel Sherman of New York City, is investing in the nursing home campus and its workforce to improve its ratings, Luterek said.

Luterek said he is aware of the petition and protest, but declined to comment on them.

More than 330 people have signed Page's online petition that calls for closing of the nursing home.

“How does New York State allow a facility like that to stay running?” Page said. “This place needs to be shut down and reopened by a local owner and in the nonprofit model.”

Page said she is awaiting a response from the state Health Department to her complaint filed regarding her father's treatment.

The protest she has organized is set for 2:30 p.m. Saturday, Feb. 9, on the sidewalk in front of the East Aurora nursing home.

How to keep nursing home costs from devouring your life savings