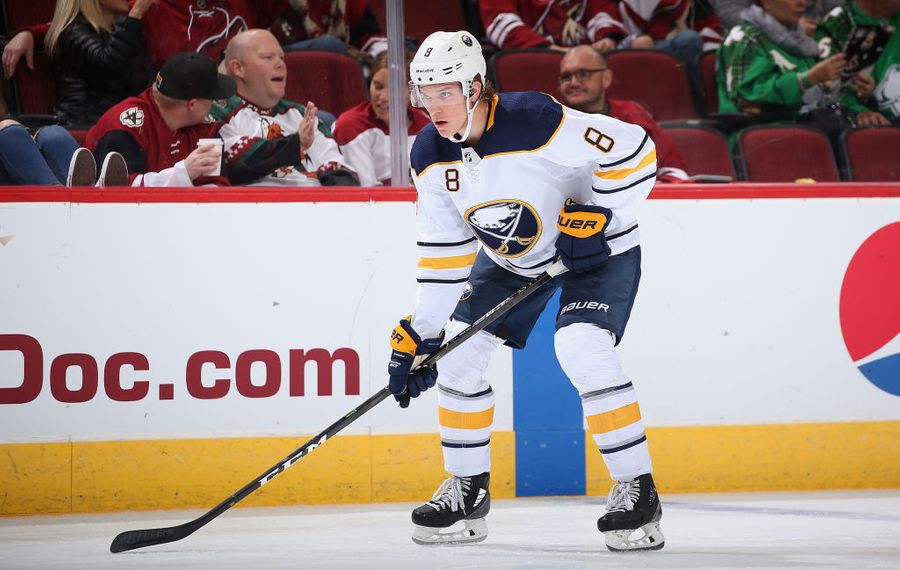 Casey Nelson is one step closer to possibly returning to the Buffalo Sabres' lineup. Nelson, a 26-year-old defenseman, began a conditioning assignment with Rochester on Friday.

Nelson, who has missed the past 24 games with an upper-body injury, was available to play for the Amerks Friday night against Springfield and can appear in up to three AHL games before the Sabres must add him to their active roster. The other option is to try to permanently send him to Rochester, though Nelson would have to pass through waivers.

The Sabres will likely have nine healthy defensemen upon Nelson's return, and they are unlikely to risk losing him to another team. After all, Nelson is right-handed and was having a strong season prior to suffering the injury in a loss to Toronto on Dec. 4.

Nelson had one goal among six points with a plus-6 rating in 22 games for the Sabres. He may have an opportunity to help them following this assignment given the team's defensive struggles. Matt Hunwick and Nathan Beaulieu, whom have been healthy scratches for much of the past month, could be back in the lineup in one of the two maintee weekend games.

The Sabres, like most teams around the NHL, are also low on right-handed defensemen. Hunwick, Beaulieu, Lawrence Pilut, Jake McCabe, Marco Scandella and Rasmus Dahlin are all left-handed. The exceptions are Nelson, Zach Bogosian and Rasmus Ristolainen. It is unlikely Nelson would go unclaimed on waivers.

Nelson began practicing with the Sabres following the All-Star break on Jan. 27, but he estimated that he had been skating for "weeks" with rehab and development coach Dennis Miller.

"Control what you can control. … You just keep your head down," Nelson said following his first practice with the team. "You just have to get better every day and when your name gets called you have to go out and play. That’s about all you can control."

Housley kept his forward lines the same during Friday's practice, with two exceptions.

Tage Thompson, who was a healthy scratch in Thursday's 6-5 overtime loss to Carolina, skated on the third line with C.J. Smith skating as the extra forward. Kyle Okposo was bumped down to the fourth line, and Vladimir Sobotka was elevated to play with Thompson and Evan Rodrigues.

Smith, who has two goals in his past three games with the Sabres, had one shot on goal in 10 minutes, one second against the Hurricanes.

Smith is the extra forward

The two men on the Sabres' new-look top defensive pairing are expected to each achieve a milestone Saturday against Detroit. Ristolainen and Scandella will be playing in their 400th and 500th career NHL games, respectively. The loss to Carolina was Bogosian's 600th career game.

"You don't really think about it but as you're coming up to that number, you do realize the years are flying by when you're having fun and doing something you love," Scandella said. "Some of my friends were calling me the other day reminding me and one said, 'Do you realize what 500 games is? What it means?' It's pretty cool."

The Sabres will host the Red Wings on Saturday at 1 p.m. in KeyBank Center. The Red Wings have the third-fewest points (49) in the Eastern Conference and had their three-game winning streak snapped with a 4-3 home loss to Vegas on Thursday night. Buffalo defeated Detroit in a shootout, 3-2, at Little Caesars Arena to stretch its winning streak to nine on Nov. 24, and the Sabres lead the series, 6-3, over the past three seasons.

"It’s hard to say how we’ll respond because tomorrow is not now," Linus Ullmark said Friday. "It’s a big game. It’s a conference game. We have to be sharp."

Red Wings winger Thomas Vanek, who played for the Sabres from 2005 to 2013, has a point in each of his last three games and nine points in his last eight games. He ranks fifth in Sabres franchise history with 254 goals.