The footprint of the perpetually protected forest in Zoar Valley is growing.

More than 600 acres – about a square mile in area – is being added to the already protected lands in southern Erie and northern Cattaraugus counties as part of a collaboration between a private landowner, the state Department of Environmental Conservation and the Nature Conservancy.

Why is that important?

It's one of the few remaining intact blocks of existing forest areas in the state's Great Lakes region, the Nature Conservancy said.

The land is in a river valley, adjacent to some of the 1,200 acres the Conservancy already has acquired in the area as well as protected lands of the East Otto State Forest and DEC's Zoar Valley Multiple Use Area, the organization said.

The acquisition is being hailed as a victory for land preservation efforts in Western New York and for hedging against climate change.

Howe added: "That's a tall order, but workhorse lands like the forests of Zoar Valley are up for the challenge."

The old-growth forest is comprised predominantly of cherry and hard maple trees. Threatened tree species like ash and hemlock also grow on the parcel. 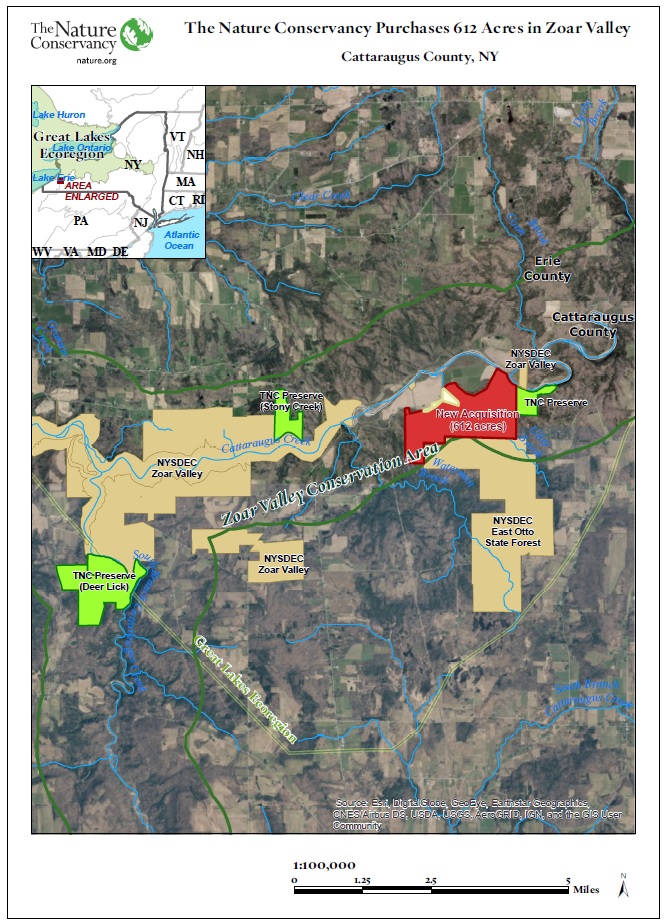 And, Zoar Valley is on the northern-most range of the American chestnut tree. Young chestnut sprouts are often found in the region, officials said.

It's also an important habitat for migratory songbirds. The calls of black-throated blue warblers, black-throated green warblers and the scarlet tanager are a few you can expect to hear. There are  black bears and bald eagles in the forest, too.

State environmental officials regard Cattaraugus Creek and its tributaries as priority areas due to its clean water and steelhead and other trout species.

Its watershed is one that the DEC is prioritizing for protection as part of its broad Great Lakes Action Agenda.

Besides its proximity to other protected areas, what makes this parcel special will be its frontage on Cattaraugus Creek, whose watershed provides a vast drinking water source for thousands of residents, including the Seneca Nation.

Jim Battaglia, who collaborated on a survey into Western New York's old-growth forests about two decades ago, identified Zoar Valley and Allegany State Park as the region's two "most intact forest systems."

"The Zoar Valley is an entire landscape of old growth, not just a woodlot," Battaglia said.

Darling said it was important to his family for the land to remain preserved under the stewardship of the Nature Conservancy and the DEC for generations to come.

"This latest acquisition is in accordance with my father's legacy of keeping Western New York's lands available for the recreational use of people who live and work here," Darling said.

Nature Conservancy officials expect to collaborate with the DEC to get the land officially added to the state's nearly 4,500 acres of protected lands in and around Zoar Valley.