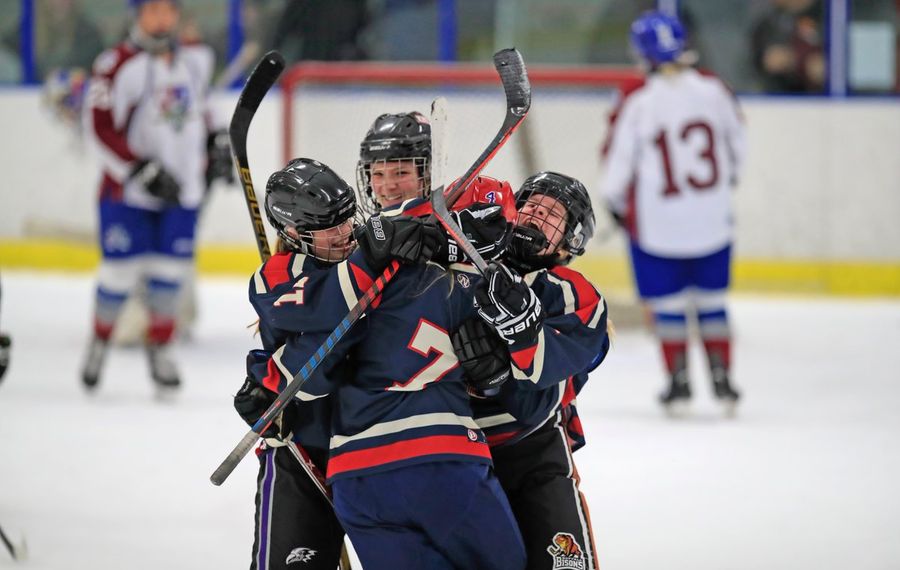 While Emma Roland has been lighting the lamp and piling up points with regularity this season, twin sister Erin has quietly done her part in the defensive zone to contribute to Williamsville's success.

It turns out the defenseman also has a scorer's touch.

She showed it off at 2 minutes, 10 seconds of overtime by netting one of the biggest goals in Williamsville girls hockey history.

Erin Roland’s tally enabled Williamsville to shed the bridesmaid label once and for all as the program won its first Section VI championship by taking down defending state champion Frontier/Lake Shore/Orchard Park, 4-3, Wednesday at Northtown Center in Amherst.

Williamsville’s forecheck, a thorn in FLOP’s side throughout, forced a turnover that led to Roland’s goal. She not only read the play near the middle of the blue line but stepped into shot that found its way through a screen and into the top corner. The goal triggered a wild celebration by the tournament’s No. 2 seed, while leaving FLOP – the team synonymous with success despite its unique acronym of a nickname, in a state of shock.

“It’s just the best feeling,” said Roland, who scored once during the regular season while Emma was setting the program record with 27 goals. “I just got out there and it kind of popped out and I just took a one-timer, and it went in top left hand corner. I’m just so excited.”

Not only did Williamsville win for the first time in five title-game appearances, it rallied from a 2-0 first-period deficit to hand FLOP its first playoff defeat since it lost two years ago in the state final to Skaneateles.

“The girls just believed in themselves,” Williamsville coach Rick Hopkins said. “That’s a great team down the hall. To beat a state champion in a championship game you have to have a championship effort and a historic effort.”

Being stubborn doesn’t hurt, either.

Williamsville proved that by playing with more energy from the second period on despite playing its third playoff game in as many days. It also proved that by rallying to beat a team it went 0-2 against during the regular season.

"They were the better team," FLOP coach Bob Klimowicz said. “We turned the puck over in our zone a lot ... and part of that was the pressure they put on us."

Williamsville returns to action at 6 p.m. Friday in the New York State Public High Schools Athletic Association Final Four at HarborCenter. Williamsville (14-3) takes on Section X champion Potsdam at 6 p.m. to open a state semifinal doubleheader. VII-Plattsburgh and III-Skaneateles meet in the other semifinal. The final is at 6 p.m. Saturday.

It looked as if top-seeded FLOP (13-2-1) would be punching its ticket for the third straight season to the state Final Four. FLOP, the only Section VI program to win sectionals, states and WNY Federation playoff tournaments in the same year, needed just 4 minutes to take control on the scoreboard on Keegan Shanahan's goal. FLOP cashed in on a two-man advantage late in the period when Brooke Becker scored with 3.4 seconds to go with a hard-snap shot from the point through traffic.

Williamsville started getting the better of the play after that and received the opening it needed to start its comeback in the form of a power play. Emma Roland scored twice in the second period – the first on a two-man advantage just 3:29 into the frame through a screen.

FLOP broke the 2-2 tie 41 seconds into the third on Shanahan’s second goal as she knocked in the rebound of a Jessica Carey shot. But Williamsville got the equalizer with 8:34 left on Elizabeth Jackson’s goal to set up a dramatic finish.

Williamsville held a 37-30 edge in shots through three periods. Williamsville had a couple odd man chances – including one by Emma Roland -- before the end of regulation.

A Roland did impact the finish.

“I was worried at the start of overtime. We put in such a great effort that third period and you wondered what was left in the tank,” Hopkins said. “Erin Roland read the play perfectly, bouncing puck. She stepped in and kind of a rainbow shot that made it through. I saw the net move it was like, ‘wow we finally won one of these things.' I’m excited for the girls.”