Teens who suffer a sports-related concussion are likely to improve more quickly if they start aerobic exercise within a few days under the guidance of a health care specialist, according to what has been hailed as a landmark study led by two University at Buffalo researchers.

The findings contradict a long-held belief in medical circles that those concussed are best served by at least several weeks of rest before resuming regular activities.

“This should start to change the approach to concussion care from being a very passive approach – essentially don't do anything until your symptoms go away – to one that's more active in promoting some moderate level of physical activity," said Dr. John Leddy, director of the UB Concussion Management Clinic and lead author of the study.

The findings were released Monday in the medical journal JAMA Pediatrics.

An accompanying editorial called the work “a landmark study that may shift the standard of care.”

Severe brain injury, in which rehab begins as soon as patients can tolerate it, is less restrictive than how milder concussions generally are treated, wrote Dr. Sara Chrisman, a pediatrician with the Center for Child Health, Development and Behavior in Seattle.

The findings were based on the treatment of 103 teens from Western New York and Canada and involved the latest of more than a dozen years of continuing research led by Leddy, a clinical professor of orthopedics in the UB Jacobs School of Medicine and Biomedical Sciences, and his concussion clinic co-founder, Dr. Barry Willer, a professor of psychiatry in the medical school. Dr. Michael J. Ellis, medical director of the Pan Am Concussion Program at the University of Manitoba, collaborated and co-authored the report.

Their work involved the first randomized clinical trial of a treatment in the acute phase of injury after a sport-related concussion. The study began in the fall of 2015 and ended last June.

All were given what has become known as the “Buffalo Concussion Treadmill Test,” which Leddy and Willer developed. It measures the heart rate while someone walks on a treadmill that is adjusted to become progressively more challenging.

When symptoms began, the clinician noted the heart rate and prescribed a “dose” of exercise that could be done in the clinic or elsewhere at up to 80 percent of that rate for up to 20 minutes, or until concussion symptoms emerged. Then, patients were told, they should stop.

Study participants were assigned to one of two groups. Fifty-two were told they could walk or bike daily using the aerobic exercise protocol, and gradually go beyond 20 minutes until symptoms emerged, until they recovered. The remainder were put in a “placebo-like” group and told to do stretching exercises in similar fashion.

All participants were sent home with a heart monitor and visited the clinic once a week to have a new treadmill test and have their heart rate threshold readjusted. They also were examined by a doctor who wasn’t told which study group they had been assigned.

All but two teens in the exercise group recovered within four weeks – a period when a patient is considered to be in delayed recovery, which raises the risk of lasting health challenges. Seven of those in the stretching group needed more than 30 days to recover.

Those findings surprised researchers, particularly the success of the stretching group, Willer said. He stressed the importance of a concussion recovery program that is measured and takes place under the watchful eye of a concussion specialist.

"One of the worries that we have is that people might not understand the whole answer here,” Willer said. “It's exercise at a level that does not bring on symptoms – and that's really important. If people are going to exercise too much, they're going to make themselves sick."

Children and adults who suffer a concussion generally are told to rest at home, avoid school and work, and limit their TV and computer screen time until their symptoms disappear. Recovery can take several weeks or more.

Leddy said those who come to the UB clinic and a growing number of similar medical programs are directed to exercise as part of their recovery as well as gradually resume other activities, but are told to stop if symptoms start. 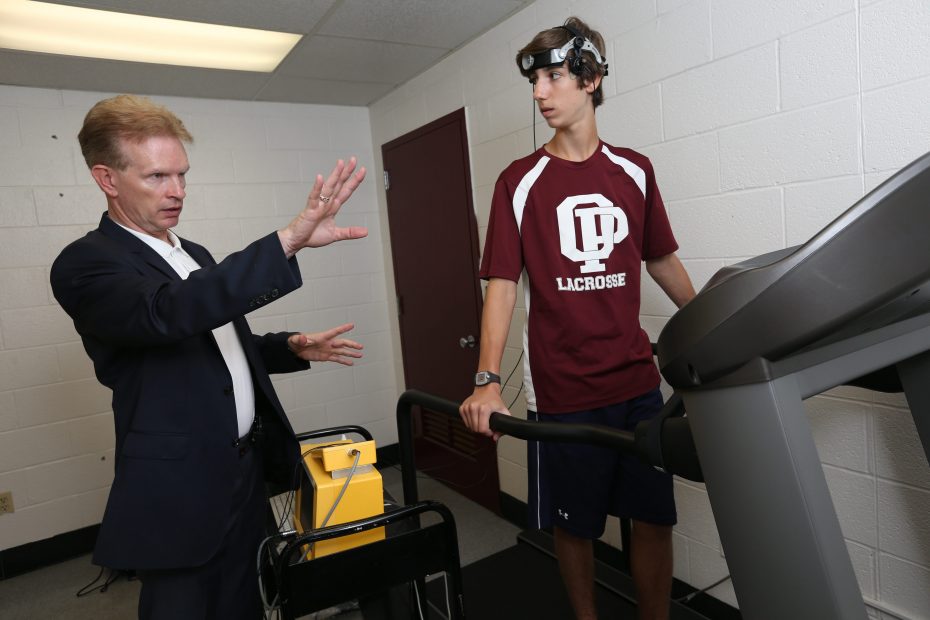 Dr. John Leddy, director of the University at Buffalo Concussion Management Clinic and a physician with UBMD Orthopaedics and Sports Medecine, works with Jason Hanania, then 14, of Orchard Park, in 2015 during a concussion study. He is lead author of a new report in JAMA Pediatrics that demonstrates the benefits of moderate exercise after a sports-related concussion. (Sharon Cantillon/News file photo)

The latest study is the continuation of more than a decade of work from the UB-based leaders and their research team. Leddy and Willer published their first concussion-related article in 2004, opened the UB concussion clinic on the school’s South Campus in North Buffalo a couple of years later and have published more than 70 articles since, many of them after studies with collaborators at other universities in the U.S. and abroad.

Their approach to concussion treatment has since gained favor internationally with leading concussion centers, as well as physical therapists and trainers who work with elite high school athletes, as well as college and professional sports teams. That includes the Buffalo Sabres hockey team, Buffalo Bills football team and at UB. Leddy practices at UBMD Orthopaedics and Sports Medicine, which handles medical duties for those teams. Two satellite concussion clinics have been established at practice locations.

One of the first big tests of the theory put forward by the UB research duo came in 2006, when a concussion benched then-Buffalo Sabres forward Tim Connolly. A leading out-of-town concussion center prescribed eight months of rest, but Connolly couldn’t overcome some of his symptoms. Then-Sabres coach Lindy Ruff learned about the work at the UB clinic. His injured player visited the clinic, took a heart rate test similar to the one used in the latest study and then followed a similar protocol.

His symptoms ended within four weeks. He was back on the ice a few weeks later after a reconditioning program.

The researchers suspected that a concussion knocked Connolly's autonomic nervous system off track, which helps explain common concussion symptoms including trouble sleeping and concentrating, sensitivity to light and noise and headaches. They suspected that exercise would bring that system back into balance.

“We were pretty convinced it could work,” said Willer, research director with the UB concussion clinic.

In the years since, top concussed athletes from Europe, Australia and New Zealand have taken the Buffalo Concussion Treadmill Test to find a benchmark for returning to some physical activity after a concussion.

"The results of this study suggest that we must build greater capacity within our health care systems to allow patients access to multidisciplinary concussion programs and clinics that have the medical expertise to carry out early targeted rehabilitation of acute concussion,” said Ellis, the researcher who works in Winnipeg.

Studies continue to underline, in growing detail, the effectiveness of the treatment – despite the fact that leading researchers still aren’t exactly sure how it works.

Still, "It's further evidence of what we've been saying for a long time,” Leddy said. “Cocooning somebody – telling them to do nothing after a concussion – doesn't really do much and may be harmful, whereas if you get them active at a moderate level that does not exacerbate their symptoms, that helps them recover. This study was the best we've done so far in terms of design and methodology."

Researchers look to bolster the latest findings, including whether early intervention can help lower the percentage of adolescents whose recoveries last beyond a month.

“The hope is that by doing a larger study, we may be able to show that early intervention helps prevent some of those kids from going on to have a prolonged recovery," Leddy said. "That's important because it's those kids that really have trouble with school performance and missing whole seasons of sport."

More study on patients who have suffered concussions that are non-sports related also are needed.

"Sports-related concussions tend to be on mildest end on the brain injury spectrum but if you had a similar severity of injury with a fall or car accident, I don't see why this wouldn't apply,” Leddy said. “We've done this with non-sports patients and adults and it helps."

Still, he said, many severe concussions come with associated neck and other injuries, and sometimes post-traumatic stress, making them more complicated.

The release of findings offers hope to concussed athletes.

“Until now, nothing else has been proven in any way effective for treating concussion,” Willer said. “This is the best evidence so far for a treatment that works.”

UB study of ex-Bills, Sabres finds CTE 'much more rare than we thought'